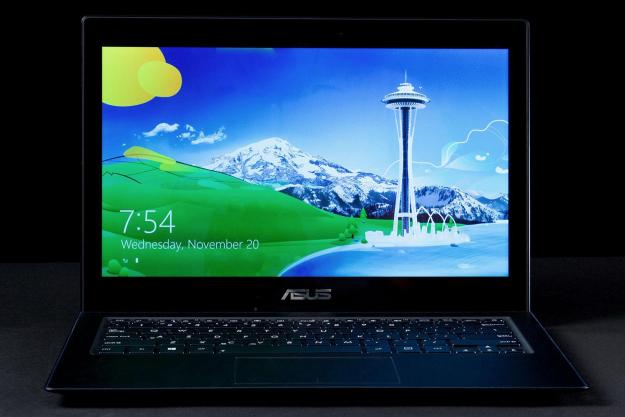 “Though fast, and in possession of a beautiful 1440p display, this Zenbook stumbles under the burden of its outrageous price.”

Every industry has its wars. With cars, manufacturers fight over horsepower. With pizza, it’s speedy delivery. Now the laptop market, after years of fighting over MHz and RAM, has a new battleground; display resolution.

Apple fired the first shots in this battle with its MacBook Pro with Retina, an unprecedented laptop that offered twice the pixel density of common Windows laptops when it debuted. Other notebook manufacturers, seemingly caught off guard, made no effort to respond at first. Then, slowly, laptops with resolutions beyond 1080p began to arrive, starting with the Toshiba Kirabook. So far, these attempts to parry Apple’s Retina display have proved overwhelming, but now, Asus, maker of the popular Zenbook, has arrived on the front line.

The Asus Zenbook UX301L pulls no punches. Even the base model boasts a 2560×1440 display, a pair of 128GB solid state drives, and eight gigabytes of DDR3 RAM. Our upgraded review unit includes all of the above and a Core i7-4558U processor, one of the quickest low-voltage parts Intel has ever made. On paper, this Asus has several advantages when compared to the competition from Cupertino.

There’s just one downside; price. Even the entry-level version of this ultra-premium ultrabook will set you back $1,799, while our upgraded unit sells for an astounding $2,199. That’s more than even the base 15-inch MacBook Pro w/Retina, never mind the 13-inch model. Can a Windows laptop possibly justify such a premium? Let’s find out.

While the UX301L is part of the Zenbook line, it looks a bit different than previous models, which had solid but bland silver, metallic exteriors. This new model is a dark shade of blue and the display lid, which uses the circular metallic finish found on many premium Asus products, is coated with glass for an extra dose of elegance. The design makes a great first impression and attracts plenty of attention, though it’s also a bit of a fingerprint magnet.

The interior of the ultrabook, in contrast to the flashy exterior, is made up of flat, non-gloss metal. While the material feels expensive, the look is a bit cold and doesn’t live up to the standard set by the glass display lid. The most serious aesthetic offense is the keyboard, which looks cheap to our eyes. There’s something about the font and the plastic semi-gloss keys which puts us off.

Build quality is good overall, but there are some weak spots. The most obvious is the display, which is extremely thin and prone to flex. Only slight pressure is required to deform the panel enough to disrupt the LCD’s picture. Panel gaps also cause trouble; though tight, they’re not located out of view, which means the system looks a bit less expensive than its $1,799 base price suggests.

The Zenbook’s pursuit of style unfortunately impacts connectivity. Only two USB 3.0 ports are available, along with a mini-HDMI out, a combo headphone/microphone jack and a card reader. While Asus does bundle adapters for VGA and Ethernet ports, that hardly makes up for the general lack of ports. There’s not even enough here to connect an Ethernet adapter, an external hard drive and an external mouse simultaneously

As we mentioned, the keyboard on this Zenbook doesn’t look like it fits the price tag, and typing feel is also a bit behind the curve. Key travel is average at best and the layout doesn’t feel as spacious as it could be due to the fact that there’s an inch of unused space on either side of the keyboard. Asus’ flat, square keys make typing a bit more difficult than it should be.

Backlighting is standard and comes with three brightness settings, so you should be able to find a brightness level which suites your environment. There is some backlight leak, however, which can be an annoyance in a very dark room.

Also maddening are the WiFi and Power buttons which for whatever reason don’t adjust with the rest of the keyboard but instead are permanently lit. You may have to stick some duct tape over them if you plan to watch a movie.

The touchpad, like the keyboard, is adequate but not exceptional. Its surface is flat, of moderate size, and includes integrated left/right buttons. These lack travel, but they at least activate with a solid thunk. Multi-touch gestures work well, too, though they’re a far cry from a MacBook. Windows can’t match the gesture support of OS X.

Windows lets down another sharp display

While the 2560 x 1440 panel on the UX301L offers slightly fewer pixels than a 13-inch MacBook Pro with Retina, that’s only because the Asus has a 16:9 widescreen display rather than the slightly squarer 16:10 format of the Pro 13. Touch is standard, though the thin screen feels a bit flimsy when handled.

The high pixel density of this display predictably results in a sharp image, but it’s not as clear as it could be. This is because of Windows 8 which, despite some upgrades to scaling relative to earlier versions, struggles to deal with screens that offer more than 200 pixels per inch. Even at the largest default size, icons and fonts are quite small, and can be hard for those with imperfect vision to read. Legacy programs scale poorly and all browsers have difficulty making full use of the extra clarity.

That aside, the display is a looker. In our tests, it rendered 98% of the sRGB gamut while also producing the brightest images we’ve seen since the ThinkPad Helix, which we reviewed in June. Contrast is a respectable 320:1 at maximum brightness, and reaches a maximum of 390:1 when set to 50%. Even better results would be possible if the screen could provide deeper blacks. As it stands, it can only manage a smoky gray.

Audio quality is good for an ultrabook. Maximum volume is loud enough to fill a small room and distortion is only evident when mid-range tones are played alongside deep bass. A pair of headphones or external speakers will be an upgrade, but the built-in speakers will do in a pinch.

Core i7 runs away from the pack

While base models of the UX301LA wield the Core i5-4200U, a mid-range processor, our upgraded review unit shipped with the Core i7-4558U. This CPU is clocked at 2.8 GHz and tops out at a maximum of 3.3 GHz when Turbo Boost kicks in; impressive for a low-voltage CPU. This translates to a SiSoft Sandra Processor Arithmetic score of 54.17 GOPS and 7-Zip benchmark score of 9,806. Both figures are well above average for a dual-core processor. The Samsung ATIV Book 7, for example, can only manage respective scores of 39.32 and 7,471.

The Asus Zenbook UX301LA simply asks too much for too little.

Storage performance was strong as well, with our review unit’s 256GB solid state drive turning in a PCMark 8 storage benchmark score of 4,853. This is not outstanding, but it is at the top range we’d expect to see from an SSD. The drive’s quick access times are noticeable in everyday use, and apps launch almost instantly.

Gaming performance, however, proved more mundane. This was unexpected because the system’s Core i5-4558U processor boasts an integrated Intel Iris Graphics 5100 chip, which should dominate the HD 4600 GPU found in most ultrabooks. Yet 3DMark’s Cloud Gate benchmark managed a score of just 4,629, while Fire Strike turned in a figure of 619. These results are a bit better than average for Intel integrated graphics, but the margin is so slim you’d be hard pressed to notice it in-game.

The three-pound weight and 15 millimeter thickness of the Zenbook UX301LA makes it a cinch to pack up and lug around, and Asus even ships the laptop with an attractive and slightly padded laptop sleeve.

While the 50 watt-hour battery is larger than normal, its weighed down by the Zenbook’s high-resolution display and relatively quick Core i7 processor. This translates into web browsing battery life just a few minutes short of five hours and light-load endurance that comes in at a minute past nine hours. These results are average among laptops with a 4th-gen Intel Core processor and short of leaders like the Dell XPS 12, which can achieve up to 7 hours of web-browsing endurance.

Tests showed that while power draw can be as low as 9 watts when idle, it can also reach up to 37 watts at load, which is higher than average for an ultrabook. Still, overall power draw is low compared to most PCs; the Zenbook isn’t going to make a dent in your power bill.

We were pleased to see – or rather, hear – the UX301LA continue the trend of 4th-gen Core ultrabooks with quiet fans. The noise at idle is too low to register on our decibel meter and barely audible even in a silent room. Placing a heavy load on the laptop can increase fan noise to 44.3 decibels, which is loud enough to be easily noticeable, but no worse than average for the category.

The fan’s efforts, though modest, are more than enough to keep temperatures in check. At idle we recorded a maximum external reading of 76.1 degrees Fahrenheit, which was barely above room temperature, and the 7-Zip benchmark increased that figure to just 82.3 degrees. Our graphics stress test pegged temperatures at a much higher 99.7 degrees, which is noticeably warm, but that’s not bad for a system this thin.

The UX301LA is, in many ways, a worthy step forward for the company’s already excellent Zenbook line. Besides its elegant, eye-catching design, the system shaves off weight and improves display resolution while still providing decent battery life, something not all competitors can claim (we’re looking at you, Yoga 2 Pro.)

But then there’s the problem of price. At $1,199, this would be an easy to system to recommend; the only serious problem is Window’s inability to scale well on a pixel-dense display, which isn’t the Zenbook’s fault. At $2,199, however, there’s simply no reason to buy this ultrabook.

A MacBook Pro 13 with Retina offers better build quality, a superior keyboard and touchpad, far longer battery life, more ports and an even better display, all for $900 less. Even those who hate OS X have better options, like Dell’s XPS 13. Sure, its display is “only” 1080p, but its panel also has deeper black levels and better contrast. And the XPS, too, is $900 less (with 1080p panel equipped).

If a machete is taken to the price, the Asus Zenbook UX301LA could become competitive. As it stands, however, it simply asks too much for too little.