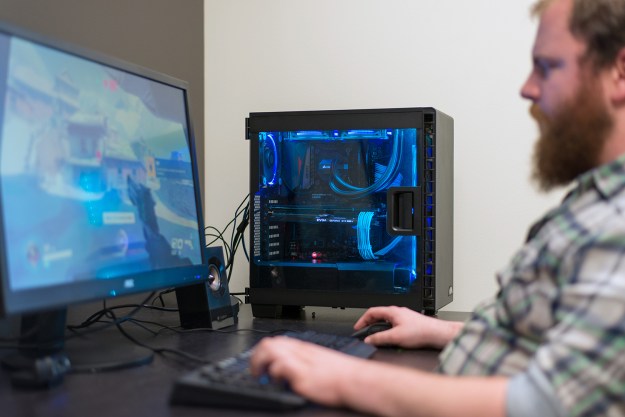 “Lean and attractive, AVADirect’s Avant speeds along without making a statement.”

Mention the idea of a gaming PC, and most consumers imagine monstrous rigs, with crazy, jagged lines, bright lights, and noisy, lumbering hardware. While that’s certainly the case for some systems, it couldn’t be further from the truth, as most gaming systems are unassuming, and more often than not, aren’t distinguishable from any other PC.

So it is with AVADirect’s Avant tower. This rig is custom-built, but not custom-designed, as it consists entirely of off-the-shelf components any enthusiast can buy. Our review system was powered by an overclocked Intel Core i7-6700K, 16GB of RAM, and a GTX 980 Ti, with a 500GB Samsung SSD and 2TB mechanical drive for storage.

That configuration rang up to a total of $2,270, which includes bells and whistles like sleeved power cables, multi-color LEDs, a high-end Corsair liquid CPU cooler, and overclocking. Clearly, AVADirect is targeting gamers looking for the best hardware value, but does it makes sense to buy a system you could easily build yourself?

Not unique, but still beautiful

AVADirect can’t take credit for how attractive the Avant is. That’s because it’s built into an off-the-shelf Corsair case, the Carbide Clear 400C. AVADirect has taken the liberty of slapping its logo over the small Corsair logo in the front of the case, but there’s no mistaking the look. That being said, Corsair is an excellent case manufacturer, and the Avant’s sturdy build and spacious internals reflect that. There’s even a tall window gracing the left side of the case, for those who like to show off.

The 400C sits just over 18 inches tall, and less than eight and a half inches wide. It doesn’t compare to true small form factor systems like the Origin Chronos, but it’s much smaller than the gaming behemoths that dominate our test benches nowadays.

AVADirect treats the Corsair case well with clean wire paths, plus fans with user-selectable LED color, and remote control multi-color LED strips inside of the case. The result is minimal clutter in the visible area of the case, with power and data mostly running behind the motherboard. Should you need to access the internals, it’s simple enough thanks to a hinged side panel with a quick release handle.

Doubling down on USB 3.1

This system can easily handle any game you throw it, at least at 1080p.

Like most custom built PCs, the Avant’s connectivity is defined by its motherboard and graphics card. The 980 Ti carries a trio of DisplayPorts, and HDMI, but the bulk of the inputs come from the Asus ROG Maximus VIII Hero.

It boasts four USB 2.0 on the back panel, with two USB 3.0, and two USB 3.1 — one type A, one type C. That’s a bountiful selection of USB ports by any standard. It has five 3.5mm ports for audio, plus optical audio out for higher-end audio systems. It also has Ethernet, of course.

The Corsair case has a pair of USB 3.0 ports on the top edge, plus 3.5mm audio-in and out. All in all, this selection of port is robust, but it’s not more than what we’d normally expect from a mid-tower gaming desktop. The dual two USB 3.1 ports are the most notable trait.

Sloppy wiring, but plenty of space

If there’s one benefit to custom PC building, it’s cable management, and it’s immediately evident that AVADirect takes organization seriously. Only a few cable runs are visible from the outside, in the form of white, braided PCIe cables, tucked neatly into combs.

While the loops and wire runs are well organized from the outside, they’re a bit messier under the non-windowed side panel. It’s only noticeable when making component changes to the case, but closing up the side takes a bit of finagling to push the extra cables back in. That isn’t a major problem, but it puts AVADirect behind the extreme attention to detail found in systems from Falcon Northwest, Origin, and other premium PC boutiques.

Still, expandability is a strong point, and AVADirect has paid special attention to upgradability. The data and power cables in the rear don’t block the hard drive bays, and the PCIe power cables for the single card setup leave plenty of room for another card in SLI underneath, without having to move them.

It’s worth noting that all of these internal bells and whistles, including the combs and LED strips, are usually found at a higher price point. Machines that are closer in price to the AVADirect, like the Acer Predator G6, or the iBuyPower Revolt 2, barely leave any room for upgrades, if there’s any at all. The Avant is built for users who might want to add on later, and that adds a lot of value on its own.

The Core i7 performs as expected

Like many of the systems we test at Digital Trends, the Avant we reviewed is equipped with an Intel Core i7-6700K and 16GB of RAM. AVADirect includes overclocking services with the purchase of Corsair H100i liquid cooler, so our CPU came out of the box overclocked from 4.0GHz to 4.8GHz.

It’s not hard to see why manufacturers and gamers alike prefer the quad-core, unlocked CPU, although it turns out our overclock was a bit too lofty. Our Handbrake test, which involves converting a 4K video clip, didn’t finish without crashing until we reduced the multiplier, bringing the chip down to a more stable 4.7GHz.

Even at that slightly reduced overclock, the Avant performed much better than the systems that aren’t overclocked, although the 4.6GHz Maingear X-Cube almost caught up in the 7-Zip benchmark. The Acer Predator was tested with turbo mode activated, which brought the clock speed up to around 4.6GHz, but even that wasn’t enough to break past the speeding Avant.

A fast but modest hard drive

AVADirect packed our review unit with storage, including a 500GB Samsung 850 Evo solid state drive, and a 2TB disk drive. We’re used to seeing the 2.5-inch Samsung drive in a lot of systems, as a cheaper alternative to the PCIe-based solutions.

Without PCIe’s help, the SSD in the Avant falls short of the high-end drive in the Maingear. The good news is that so do most of its competitors, and the faster drives only start to show up in more expensive machines. The 850 Evo is one of the fastest eSATA SSDs we’ve tested, pushing the limits of the standard.

The AVADirect has put up strong numbers so far, but as a gaming PC, it’s main role will be playing games. We’ll run it through the ringer to make sure it does just that.

The 6700K in our test system is paired up with an EVGA GTX 980 Ti. We’ve seen this card in multiple previous systems, and we’ve always been impressed by its performance. The Avant was no different.

The Maingear has a commanding lead in 3DMark’s synthetic graphical tests. That’s not surprising, as that system was equipped with a pair of 980 Ti cards in SLI. It’s certainly worth noting that adding a second card doesn’t double the performance. Instead, it only amounts to about a 50 percent gain in 3D Mark’s Fire Strike test, and almost nothing in the Sky Diver test.

Of course, a system with the Avant’s specifications is more than capable of playing anything you can throw at it, at least at 1080p. Even with the graphical settings cranked up, the average framerate didn’t fall under 60 frames per second in any of our test games. Of particular note is Crysis 3, where the Acer and iBuyPower both dropped below 60 FPS, but the AVADirect held firm.

While we don’t have 1440p results from the Maingear to compare to, It’s clear the 980 Ti in the Avant helps it slide past its competitors as the resolution climbs. The Avant’s average framerate stays over 100 frames per second in every game except Crysis 3, which is notoriously difficult even on high-end systems. The Acer and iBuyPower both show themselves to be capable systems at 1440p, but depending on the game, the Avant has a clear advantage.

Though this computer pumps out the power, it doesn’t make a lot of noise. It just breaks our noise floor at idle, hitting about 40.6 decibels. Even at load, it’s only louder than the Acer Predator G6, thanks to the Acer’s thick outer shell. It stays just under 44 decibels, while the Maingear shoots up to an aggressive 54.4 with Furmark running.

AVADirect skips the bloatware for its custom built PCs, the Avant included. It comes with just Corsair Link, to control fans and temperatures across the case, and Sonic Studio, an audio driver, installed at first boot. This is a feature we expect of custom built PCs, which are usually loaded with OEM installations, but it’s not one we see all the time.

The AVADirect Avant tower includes a three year limited warranty with Avant Tower systems. That includes three years of parts, labor, and lifetime technical support, as well as free shipping back to you in the continental United States, although you’ll have to cover the shipping to AVADirect.

If it’s value you’re hunting, it’s hard to beat the AVADirect Avant. At just $2,270, it’s competitively priced given its hardware and level of performance. You’ll save anywhere from $300 to $700 on systems with similar parts and performance, with the exception of the Acer Predator, which sneaks in at $2,000, even with a 256GB and only a standard GTX 980.

That being said, the AVADirect lacks some of the more refined features we’re used to finding in high-end systems. The case is an off-the-shelf affair which, while nice, can’t compare to Origin and Falcon Northwest’s unique enclosures. The overclock on the processor was a little sloppy, which is an issue for less experienced users, and the cable runs in the back could’ve been neater.

Still, a lot of bells and whistles, like multi-color lighting, braided cables, a 1000W power supply, and advanced connectivity like USB Type-C, are found in the AVADirect, and some of them are included at no extra cost. If you don’t care about having a unique rig, and instead seek the highest performance per dollar, the Avant is a great choice.

Microsoft confirms Surface event for October 12, Surface Pro 9 expected
Best Dell XPS Deals: Up to $600 off top-rated laptops
Best Apple iMac Deals: Get an Apple desktop for $539
Best desktop computer deals for September 2022
Adobe Free Trial: Try Creative Cloud for free
Why AMD doesn’t need to beat the RTX 4090 to overtake Nvidia
Why the RTX 4080 12GB feels a lot like a rebranded RTX 4070
How much does the RTX 4090 cost? RTX 40-series buying guide
Hackers may be hiding in plain sight on your favorite website
Pico 4 VR headset is here to take on the Meta Quest 2
Nvidia CEO’s response to the EVGA controversy may surprise you
The HP Omen gaming laptop has a $400 discount today
This Lenovo laptop deal cuts the price down to $99