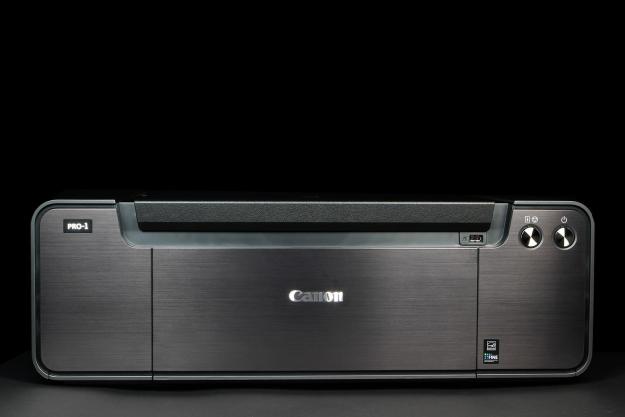 “If you’re a serious photographer and high-quality prints matter to you, you should invest in a prosumer photo printer like Canon’s Pro-1.”

In the photo-printing category, Canon offers three lineups. At the lower-priced end of the category is the consumer-centric Pixma series, while on the other end of the spectrum is the professional imagePROGRAF wide-format series. We’re talking a range that runs from less than $100 to thousands of dollars. And, in-between these is the Pixma Pro, aimed at the “prosumer” customer who needs more capability than the typical home photo printer can provide, but doesn’t have the need – or the budget – for a multi-thousand dollar printer.

At just under a thousand dollars, the Pixma Pro-1 ($999) is at the top of Canon’s Pixma Pro lineup, suitable for use by photographers – both advanced amateur and professional – that won’t find the 13-inch behemoth intimidating or limiting. If you take photography seriously and enjoy printing them out to enjoy, this is the type of printer that’ll speak to you.

Like the Pixma Pro 10, the Pro-1 is a very large and heavy printer. There’s no point in trying to hide it because it is that massive, and unless you’re a strongman don’t even attempt to lift it on your own. Despite the size, the Pro-1 can only handle a max paper width of 13 inches. Many similar printers from other manufacturers, however, have the capacity to print on 17-inch wide media. For example, the Epson Stylus Pro 3880 that we use to produce our reference prints for image quality comparison is about the same size, but has a 17-inch wide media handling capability.

If we must complain about something, then it’s the size and weight.

This may or may not be a consideration. A lot of photographers work on 13 x 17-inch or smaller media, so the Pro-1 would do fine. At the same time, many of the prosumer printers with wide-media-handling capacity don’t offer as wide a color gamut as the Pro-1. But there are tradeoffs beyond printer size, like the inability to use roll paper, which are less expensive than regular paper. Whether or not this printer is the right one will depend on your printing needs.

All Pixma Pro models look very similar, with an attractive black and gray case. The Pro-1 is not covered with numerous controls, just two buttons on the right front panel – a power button and a paper feed/resume button. On the printer’s top surface is a button that’s almost unnoticeable; pressing it causes doors on both sides of the paper output to drop, exposing the 12 ink cartridges – six on either side. There’s a front-USB connector that’s used only for the PictBridge connection to a camera, and is easy to miss (unless you’re looking for it, you probably wouldn’t notice it). The USB 2.0 and Ethernet ports are on the rear of the printer. There’s no fax, scanner, LCD, Wi-Fi, etc. – the Pro-1 is purely about graphics.

Paper is fed from the rear. There are two feeds: The one used for non-specialty papers holds 120 sheets, and the second is a single-sheet feeder used for heavier art papers.

In addition to the two paper feeds, the Pro-1 comes with a special tray that’s used to print on a printable CD, DVD, or Blu-ray disc. Many users won’t have use for this capability, but it’s available if wanted and the software on the included CD gives you a good amount of flexibility on what you can print on the disc.

There isn’t much inside the box besides the printer; a CD with the drivers and a software suite of utilities, including plug-ins for Adobe Photoshop and Photoshop Elements as well as creative software for printing calendars, cards, and the like; a special tray to insert a printable disc through the printer; and some “getting-started” documentation. The printer also comes with 12 ink cartridges and a print head.

Printed documentation is minimal, a small booklet and a sheet notifying you that it could take up to 20 minutes for the Pro-1 to prime on initial power-up. No cables are included except the power cord.

Bring along a friend, you’ll need help dragging the printer out of the box. The Pro-1 weighs 61 pounds, but it’s not just weight that’s the matter, it’s also the dimensions (27.4 x 18.2 x 9.5 inches) that make it unwieldy to carry it on your own. Unless you have a large desk, you should consider getting a small sturdy table for the Pro-1 to sit on. In terms of the physical setup, this is probably the most difficult part.

After it’s out of the box and you turn it on for the first time, you’ll need to install the print head and the 12 ink cartons. As we mentioned, pushing the almost invisible button will drop-down two doors on the front, where the ink tanks go in their respective compartments – call us lame, but the actual doors dropping down is one of the cool parts of the printer.

It’s a beast of a printer, but the Pixma Pro-1 is capable of gallery-quality output.

The Pro-1 uses 11 colors of ink (cyan, magenta, yellow, photo cyan, photo magenta, red, five shades of black and gray), and the 12th container is actually a Chroma Optimizer that puts on a clear coating. After the tanks have been loaded and the print head installed, the printer takes about 20 minutes to prime the inks before first use. While you’re waiting for the printer to initialize, this is a good time to install those drivers and, if you need them, creative software. Installing the printer driver and all software took about 15 minutes.

When testing purely photographic printers, we don’t bother doing a performance test. The Pixma Pro-1 and similar printers are designed to turn out gallery-quality prints, not term papers for school, so it’s going to be slow. Our image quality tests were performed using two Canon papers: Photo Paper Plus Semi-gloss and Photo Paper Plus Glossy II. The print driver has selections for both of these papers, and we also selected highest quality in the driver.

Comparing the test prints to each other and to the reference prints that were printed on a calibrated Epson Stylus Pro 3880, two things were immediately noticeable.

The prints on Glossy Paper II were perfect with excellent color fidelity and the exact amount of saturation as on the reference prints. The prints produced on the Semi-gloss paper were noticeably darker than those printed on the Glossy II or the reference prints. They weren’t unusable, but if we were producing prints for display, we probably would have reprinted them using a lightening setting in Picasa 3 or Photoshop. While we don’t usually make test prints in monochrome, given the Pro-1’s five monochrome inks, we decided to give it a shot. The results were stunning on both of the papers we tested with. Subtle shadows and smooth gradations resulted in remarkable photos.

Getting a perfect print on the first try is very rare with any prosumer-grade printer (or even professional printers). We test print quality out of the box, but any advanced user will create a custom ICC profile for a brand and type of paper, or even a specific box of paper. This is done with a device called a spectrocolorimeter, such as X-Rite’s ColorMunki or Datacolor’s Spyder (which is the device we used to calibrate the Epson before we generated the reference prints). At the very least, we’d expect to make at least several prints before we achieved one worthy of being hung on the wall. That’s true of the Pro-1, but it’s also just as true for any prosumer or professional grade photo printer. Be prepared to go through some paper and ink before you get it right.

One thing to keep in mind with any wide-format photo printer is that the cost per page, especially when printing on larger media, is going to be expensive. Canon’s estimated ink cartridge yields vary from 111 to 505 prints on 11 x 14 prints using its own test method (the test print that Canon uses requires far higher ink usage than the ISO yield test protocol and documents). Since each ink cartridge costs about $36 (except for the Optimizer, which is somewhat less expensive), when you add in the cost of specialty papers, your cost per print can be a real eye-opener. Finding the yields for the ink cartridges turned out to be a bit of a challenge in itself, since unlike some of Canon’s other printers, there no link to this information. If you’re interested, you can find the information here.

Still, the 12-color ink system, with five of the inks being monochrome, lets you produce some incredible prints in both color and monochrome. And quality, of any kind, doesn’t come cheap.

Given its size and heft, and the fact that this is the top model in the Pixma Pro line, it’s surprising that Canon decided to limit the Pro-1’s media handling capabilities to 13 inches.

But other than that, our only complaint is the weight. Even that isn’t much of a complaint, since pretty much all wide-format photo printers tend to be on the hefty side, so it’s somewhat unfair to ding it for that. We can say it’s expensive, but it was never designed to be a budget printer or for the casual user to begin with.

At the end of the day, the printer is going to give you professional-quality results at home, without having to go to the print shop. If you’re a serious photographer who wants to see prints on paper, not just onscreen, you need a printer like the Pro-1. Just know that buying one, plus the paper and supplies, won’t be cheap.

Topics
The best Intel processors for 2022
This killer Black Friday deal on an RTX 3060 gaming laptop is still available
Best Dell XPS deals: Save on XPS 13, XPS 15 and XPS 17
Best MacBook deals: Save on MacBook Air and MacBook Pro
This 15-inch Dell laptop is just $250 today, but it’s selling fast
All the products that Apple didn’t announce in 2022
Nvidia may be shooting itself in the foot with its new monster GPU
The most innovative laptops of 2022
How to create a calendar in Google Sheets
Discord now lets creators make money, and it’s not with crypto
Acer Swift Edge vs. Microsoft Surface Laptop 5
How to take a screenshot on Windows 11
Best gaming laptop deals: Save on Alienware, Razer and more