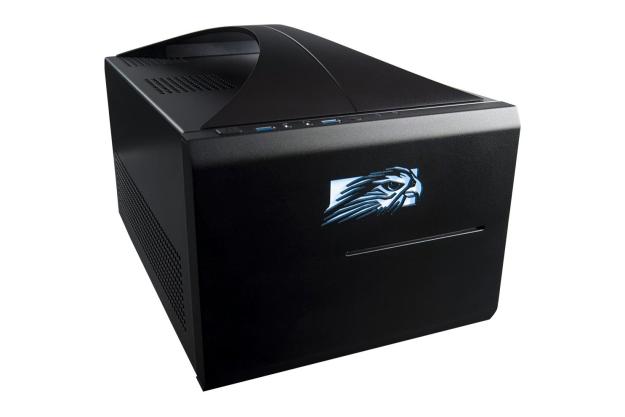 “Though small gaming systems remain a niche product, the Fragbox’s outstanding performance, quiet operation, and excellent build quality makes it a must-have for the few LAN warriors that remain.”

Haswell is here. Intel’s latest architecture, found in its new Core 4000 series processors, is making its way to desktops and laptops slated for this summer. High-end system boutiques, such as Falcon Northwest, are always eager to boast the latest technology, which brings us to our review unit: the Fragbox.

In laptops, that should mean better battery life; in desktops, that should translate to low power consumption and quiet operation. We complained of excessive noise and heat when we reviewed the previous Fragbox, so Haswell may be the perfect solution. And it doesn’t work alone; our review unit is also equipped with the just-released GTX 780, Nvidia’s new high-end graphics card, which is also designed to deliver quiet, efficient performance.

These improvements come at a price: about $2,640, to be precise. Though that might seem like a lot, it’s actually a rather tame chunk of change by the standards of high-end gaming desktops. Let’s see if the new hardware can turn this escort into a flagship.

Falcon made the Fragbox’s portability an obvious feature by adding a handle on the top of the case. However, that doesn’t mean the system is light and easy to carry. This is a tiny bruiser that weighs as much as some mid-tower computers. It’s designed for short, occasional hauls rather than daily jaunts. Falcon Northwest’s Fragbox is the LAN warrior’s dream machine.

Heft has its reward, however, as the system looks and feels like a tank. Absolutely every surface is metallic, including the power and reset switches, and there are no screws on any of the system’s most visible surfaces. Our review unit, painted with the standard matte black, looked a bit dreary, but gamers who want more color can opt for a custom paint job.

The only design downside results from ventilation. A small system needs a lot of airflow to work, so some body panels look a bit like a cheese grater. This can be an opportunity to show of the innards, however, so gamers may prefer the vents in the same way muscle car enthusiasts prefer massive hood scoops.

Though small (seriously, it’s about the size of a shoebox), the Fragbox offers good connectivity. The upper front edge provides two USB 3.0 ports along with headphone and microphone jacks.

There are eight more USB (four 2.0, four 3.0) around back, as well as S/PDIF-out, 5.1 audio, Ethernet, two DVI-out, HDMI-out, and DisplayPort. There are also additional motherboard video connections, but they do not function with a discrete video card installed.

Upgrading the Fragbox might prove difficult, even for those familiar with PC hardware. The enclosure uses a typical micro-ATX motherboard, but everything else is unorthodox. The hard drives and power supply are flipped 90 degrees from their typical orientation, the motherboard lies on the bottom of the case, and a large heat sink for the water-cooler blocks obvious progress.

… hurdles like these can be enough to send amateurs into alarm.

The secret is to first open the case by removing three screws on the rear and lifting up on the case handle. After that, a structural reinforcement on the left side must be removed, followed by the video card, which can be hard to access because its bulk blocks the PCIe clip that holds it secure (we used a pen to snap it open). The RAM and hard drives are accessible at that point, but any work with the processor or its cooler will require removal of the power supply, too.

None of this is rocket science and disassembly takes about ten to twenty minutes once it’s understood. However, hurdles like these can be enough to send amateurs into alarm. If you’d like something easy to upgrade, buy a larger desktop.

Our review unit came with the Core i7-4770K Haswell processor, one of the more powerful variants available at launch. It also boasts 16GB of DDR3 RAM, a high-end Asus Maximus motherboard, and a Crucial M500 480GB solid-state hard drive.

We threw the new Intel quad-core into SiSoft Sandra’s Processor Arithmetic test expecting it to break records, and its score of 149 GOPS did – in a sense. Though this is almost 10 points better than the quickest Ivy Bridge quad-core desktop we’ve reviewed, the Maingear F131, the new Haswell quad couldn’t touch the Maingear Shift’s record of 209 GOPS, which was achieved with a six-core Intel Extreme Edition processor.

The 7-Zip benchmark test told a similar story by reaching a score of 26,575 MIPS, which almost ties with the Maingear F131, the fastest quad-core systems we’ve reviewed. Overall, the raw processor performance benchmarks report what Intel had told us to expect: Haswell is quicker. Still, it doesn’t blow away Ivy Bridge – at least not in high-end desktops.

Our PCMark 7 test returned a score of 7,101, which is the first score above 7,000 we’ve recorded and 500 points above the previous record holder, the Maingear Shift. The Fragbox’s ability to best a larger system comes as much from its blazing-quick Crucial M500 solid-state hard drive and Nvidia GPU as it does from Haswell.

The Fragbox can handle any PC game available today without breaking a sweat.

Indeed, the GTX 780 graphics card was the real star of this system. Released just a few weeks ago, this powerhouse helped the Fragbox obtain a 3DMark Cloud Gate score of 26,301 and a 3DMark Fire Strike score of 8,342. These numbers shatter our records for this benchmark; the next-closest Fire Strike score, which came from the GTX 660Ti-equipped Digital Storm Bolt, is almost 4,000 behind.

We also tested the Fragbox with a suite of games played on a 1920 x 1200 monitor. Skyrim, with high-resolution textures installed and detail set to ultra, never dipped below its V-sync cap of 60 frames per second. Borderlands 2 ran at 145 FPS at maximum detail, and Civilization 5 ran at 64 FPS with the camera completely zoomed out, again at maximum detail. In short, the Fragbox can handle any PC game available today without breaking a sweat.

The power of silence

Both the Core i7 and GTX 780 that the Fragbox use were built with efficiency in mind, and reduced noise is a pleasant result of that focus. Falcon Northwest even went a step further by equipping our review unit with an optional CPU water cooler. All of these components worked together to create a remarkably quiet gaming PC.

These numbers are just average among gaming desktops, but they could be far worse; Digital Storm’s tiny Bolt, for example, creates as much noise at idle as our Fragbox does at load. Potential buyers should keep in mind that noise depends on hardware, and this system’s small case offers zero sound dampening. Choosing a standard cooler or a multi-GPU configuration could drastically increase fan noise.

The hardware in this immensely powerful computer needs a lot of juice to operate. We found that idle consumption sat at 54 watts. Processor load increased that to 134 watts, and stressing the graphics card further increased that figure to 330 watts.

The power consumption results may look high, but they’re actually respectable, as this small computer is almost as quick as the six-core, multi-GPU Maingear Shift we reviewed just over a year ago.

We loved the performance and the system’s small size when we last reviewed the Falcon Northwest Fragbox. What we didn’t like was its excessive heat and noise. Intel’s new Haswell architecture and Nvidia’s GTX 780 graphics card have done Falcon Northwest a great favor in this area by improving efficiency and enabling quiet operation.

With that said, Haswell’s focus on moderating consumption rather than boosting maximum speed has made for modest gains. We knew going into launch that Intel promised a performance increase of about 10 percent, and that promise seems met. Still, we can’t shake a feeling of disappointment now that we’ve tested it for ourselves.

This system was supposed to highlight Haswell, but Nvidia steals Intel’s thunder with the GTX 780, which is also a new product (though not based on a new architecture). The card is about 20 percent quicker than the preceding GTX 680, yet the 780 generates far less noise. Quiet operation, killer performance … what more could you want?

Although the combination of new processor and new graphics card makes this system a performer, it’s not without flaw. Upgradability is limited and difficult, and the price tag just north of $2,600 is nothing to sneeze at, though Falcon NW’s pricing seems fair given the system’s spectacular hardware.

Small gaming systems remain a niche product, but this one is a must-have for the few LAN warriors who remain.