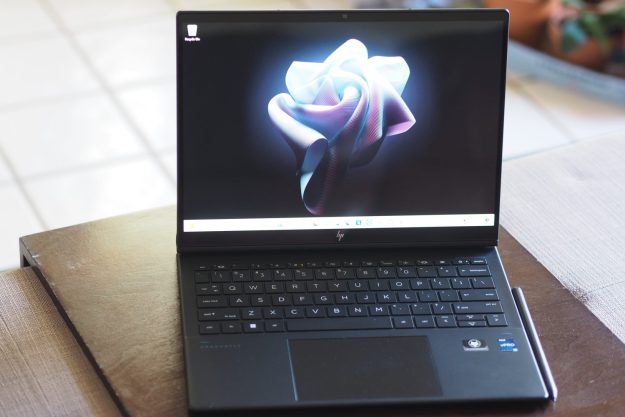 HP’s Dragonfly brand has been quite a success. It’s expanded from a single clamshell laptop to a Chromebook, a clamshell, and even a pull-forward convertible 2-in-1, the Dragonfly Folio G3. The lineup focuses on providing thin, light, and innovative business laptops with unique features for discerning business users with large budgets.

The Dragonfly Folio G3 doubles down on that proposition, offering a unique 2-in-1 design with a soft plastic cover that’s warm and inviting. In its third generation, it’s no longer fanless, and the covering no longer extends to the bottom of the chassis. Those changes are for the good, offering better performance and easier serviceability this time around.

As is often the case with vendor pricing, there’s a significant price difference between prebuilt and configure-to-order systems. Right now, the cheapest model you can buy is $2,379 for a Core i7-1255U, 16GB of RAM, a 512GB SSD, a WUXGA+ display, and WWAN support.

There’s another prebuilt configuration that costs $2,749 and is identical except for a Core i7-1265U, — that’s quite a premium for a slight uptick in CPU. If you build a custom system and max out the capabilities, you’ll spend a whopping $4,721 for a Core i7-1265U, 32GB of , a 1TB SSD, a WUXGA+ privacy screen, and . A 3K2K OLED display option is not yet showing up on HP’s website.

No matter how you slice it, the Dragonfly Folio G3 is a premium laptop that costs an arm and a leg.

As mentioned in the intro, the Dragonfly Folio G3 isn’t just a copy of its predecessor. Perhaps the biggest design change is that the plastic cover (which HP previously called “faux leather”) doesn’t cover the entire black chassis. Instead, it’s on the back of the lid and wraps around the bottom edge of the magnesium chassis. That makes it a little thinner, improves cooling by letting some heat escape via convection, and makes the laptop easier to open up and maintain. It also makes the laptop less warm and inviting to hold, but it’s not a deal breaker.

What remains the same is the pull-forward convertible 2-in-1 design, which HP originated on the Spectre Folio. Basically, a hinge in the center of the back of the display allows you to pull the bottom of the display forward into two modes. Place the bottom of the lid against a couple of tabs on the palm rest and you’re in media mode with the touchpad exposed and keyboard hidden, and then pull all the way forward to switch to tablet mode.

Both modes allow for comfortable inking, which is the entire purpose of the design. It’s a more convenient design than ta 360-degree convertible, such as the HP Spectre x360 13.5, in that media mode leaves the touchpad free to use and tablet mode feels more natural laying on a surface. Note that Microsoft’s Surface Laptop Studio uses the same design, but has faster components inside.

HP also clearly paid a lot of attention to designing a fully functional active pen. Not only does the pen support the usual specifications like 4,095 levels of pressure sensitivity and tilt support, but its physical design has also been revamped. It attaches magnetically to the side of the laptop, as do many such pens, but there’s a twist: a small tab pops out and fits into a port on the side to better secure the pen.

The pen also wirelessly charges when attached, with a light that indicates the charging status. Finally, the rounded shape is a changeup from the previous model’s flatter version. It’s also extremely comfortable to hold and use. Finally, if you connect the Dragonfly Folio G3 to an external display via USB-C, you can use the internal display and pen as an external digitizer. HP calls this Indirect Inking.

The Dragonfly Folio G3 is a well-built laptop with no bending or flexing anywhere in the lid or chassis. It’s thick at 0.70 inches, partly because of the covering, and its top and bottom bezels are larger than you’ll find on some other 13-inch laptops. That makes it a larger machine overall, but not overly so. It’s 3.09 pounds, which gives it a dense feel.

You’ll love the keyboard, which is full-size with plenty of spacing and large keycaps. The switches are crisp and require just the right amount of force. It’s as good as the excellent keyboards on HP’s Spectre line and Dell’s XPS , and just a tiny step below Apple’s excellent Magic Keyboard on the latest MacBooks. The touchpad is spacious and responsive, with quiet and confident clicks.

You’ll also appreciate the 8MB webcam, with optimizations galore that make it a superior option for videoconferencing. Auto framing keeps the subject in the center of the screen, the camera projects a 100-degree field of view, background adjustment and appearance filter technologies enhance the quality, and there’s excellent lowlight performance. Dual-edge mics adjust for the speaker’s location to provide a clear and natural sound. Also, the entire quad-speaker audio system, which sounds great, adjusts for when the display is pulled forward.

An infrared camera provides support for Windows 11 Hello passwordless login. HP also incorporated user presence-sensing technology that can lock the Dragonfly Folio G3 when the user walks away and wake it when the user returns. If Windows Hello is enabled, the laptop will automatically log in. The features worked well during my testing and augment the HP Wolf security features built into the machine.

Connectivity is limited to two USB-C ports with Thunderbolt 4 and a 3.5mm audio jack. Wireless connectivity includes Wi-Fi 6E and Bluetooth 5.3, along with 4G/ WWAN support for always-connected internet. HP also built in Tile support to locate the laptop locally or via the Tile network if you are unable to find it.

The Dragonfly Folio G3 is a great platform for inking, no doubt about it. In that kind of creative work, its 15-watt 12th-gen Intel U-series CPUs provide enough power. The same applies to demanding productivity workflows, which the laptop is also designed to perform.

In our benchmarks, the laptop performed similarly to other 2-in-1s, both 360 convertibles and detachable tablets. The HP performance-tuning utility made the most significant difference in the Cinebench R23 benchmark, and while the Dragonfly Folio G3 was a bit behind the rest of the pack, it’s in the same ballpark.

The Dragonfly Folio G3 may not be fanless, but it’s extremely quiet. When the fans ramp up, they’re barely audible — according to HP, they’re quieter than a quiet room at just 26 decibels. I found the fans barely noticeable during the most intense benchmarks, and knowing that they’re helping to keep the laptop running quickly and cooler is comforting.

Overall, the laptop was a solid performer that won’t handle demanding creative tasks, but is good enough for everything else.

Battery life was average for the class. It lasted 7.75 hours in our web-browsing test, 11 hours in our video test, and 10 hours in the PCMark 10 Applications battery benchmark. Those results indicate that you’ll get most of a day’s use out of the laptop before running out of power, but if you plan a marathon session, you’ll want to keep your charger handy.

Opt for the OLED display

The 13.5-inch 3:2 WUXGA+ IPS display is sharp enough and enjoys a taller, productivity-friendly aspect ratio. It’s plenty bright and has outstanding contrast. While its colors are extremely accurate, they’re not wide enough for serious creative work.

You’ll want to spring for the OLED display if you need wide color gamuts for photos or videos. It will provide even better contrast and wide enough colors for any use. Plus, it will make for an excellent media consumption machine.

As it is, the display is great for productivity work and inking, if the colors suffice. There’s also a privacy screen option if that matters to you.

The design might not be for everyone, but some will love it

The Dragonfly Folio G3 has a design that makes it perfect for some users, particularly those who like to use a digital pen for handwriting and sketching. It’s also a fine clamshell notebook that can serve as a great media consumption laptop in its own right.

It’s also a slightly fussy design though. It’s thicker and heavier than some alternatives, which is offset somewhat by the warm, comfortable covering on the lid. It’s also an extremely expensive laptop, which will automatically put it out of reach for many people. If you like the idea of the pull-forward design, though, the Dragonfly Folio G3 remains one of the most unique you can buy.

Topics
The best 15-inch laptops for 2023
The best cheap printers for 2023
HP Dragonfly Pro vs. Apple MacBook Pro 14: a solid alternative?
The best Dell laptops for 2023
Best laptop deals: Save on Apple, Dell, HP and Lenovo
Wi-Fi not working? Here’s how to fix the most common problems
The best Chromebooks for 2023
Best microSD cards in 2023: top picks for your computer, camera, or drone
The best game-streaming services for 2023
Ranking all 12 versions of Windows, from worst to best
If you think PCs are dying, you haven’t been paying attention
What is ChatGPT Pro? Everything we know about its response to capacity issues
I built a couch gaming PC that puts the PS5 to shame — and you can too