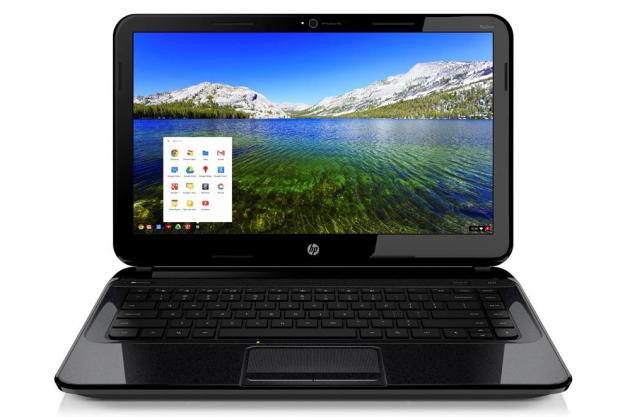 “The Pavilion 14 Chromebook is cheap and cheerful, but that’s not enough to make Chrome OS an alternative to Windows 8 for the average consumer.”

Chromebooks have been around for several years now, and while some good laptops have debuted with Google’s operating system, none of them have turned into a mainstream success. Chromebooks have always been laptops for geeks who’ve already bought into Google’s ecosystem and not for users who don’t understand why Google Docs is now called Google Drive.

The focus on geeks is translating to small systems, typically with an 11.6-inch or 12.1-inch display, yet most consumers prefer a larger display. HP finally filled the gap with its Pavilion 14, which (surprise!) offers a 14-inch screen. Otherwise, the system is very similar to existing systems sold by Acer and Samsung. An Intel processor pairs with a 16GB solid-state drive and 2GB of RAM to create a basic but well-rounded computer.

Pricing starts and ends at $330, as there are no hardware options. The system’s only accessory is an extended battery, which can be purchased with the laptop or on its own for $70. The price looks good for an Intel-powered laptop, but is a large Chromebook really an alternative to Windows?

Given the price, you’d expect the Pavilion 14 to look and feel a bit cheap. And you’d be correct. While metal surfacing is common even on affordable laptops, it hasn’t made its way to systems this inexpensive. HP attempts to class up the interior and exterior with a subtle metallic-flake paint finish that looks great in sunlight, but the budget construction of this all-plastic laptop is apparent from first touch.

With that said, there’s nothing functionally wrong with this Chromebook’s construction. The chassis is solid, the display hinges keep the screen locked in place, and no surface feels flimsy or fragile. This is just a simple, inexpensive laptop. And there’s nothing wrong with that.

Thickness reaches a maximum of 0.83 inches, and a fair bit of that is in the chubby display lid, making the laptop feel slimmer than the specs suggest when opened. Despite the slim profile, HP managed to cram in three USB 2.0 ports, HDMI, Ethernet, and a card reader. This array of ports is nothing record-breaking, but it’s robust for a Chromebook.

This Pavilion’s large display provides plenty of room for the keyboard, and HP made ample use of the space. The large island-style keys are well separated, and even the function keys are fat and easy to use. We’d like to see more key travel, but harping on the issue seems unfair given the price tag; this keyboard in on par with some Ultrabooks that cost two to three times more. Backlighting is not available.

Navigation is easy thanks to an excellent touchpad that provides plenty of space along with a pair of tactile mouse buttons. Multi-touch gestures work well and are aided by Chrome OS, which enables smooth multi-touch scrolling in both the browser and apps.

Not remarkable for media

Our normal display quality test does not work with Chrome OS, so we must rely on subjective impressions. In spite of its glossy display, our eyes judged the system as reasonably bright and usable in a sunlit room (though not outdoors).

This is just a simple, inexpensive laptop. And there’s nothing wrong with that.

Image quality did not impress, however. The low-contrast display tends to rob dark scenes of detail and bright scenes of life, which makes for a flat and colorless experience. Viewing angles are narrow, as well, particularly on the vertical axis.

Audio fairs a bit better. There’s no bass to speak of, and maximum volume is far from deafening, but the speakers are reasonably clear throughout their range and suffer only minimal distortion during bass-heavy tracks. Even cheap headphones are an upgrade, but the speakers will do in a pinch.

Google refreshed Chrome OS last year, and Chromebooks are now easier to use for people making the leap from Windows. While the browser remains the laptop’s portal to everything, a handy taskbar can be used to switch between Web apps, and multiple browser windows can be opened on the desktop. Browsing the Web on Chrome OS feels almost identical to the Chrome browser on a Windows PC.

Offline use has become less of concern as Google has to make some functions available offline. After proper setup, users can edit entire documents in Google Docs while offline and view emails saved in their Gmail inbox. Changes made while offline automatically sync with Google’s servers as soon as an Internet connection is re-established.

As nice as these updates are, they’re nothing new, and Chrome OS still lacks almost every other feature imaginable. Basics like parental controls, advanced power management, and accessibility tools are still missing, which means the operating system is behind not just Windows but also Android and iOS. A new update is due soon, but the features it adds, such as a full-screen “immersive mode” browsing, don’t help Chrome OS catch up to its peers.

Leave home without it

HP ships this Chromebook with a long, thin battery rated at 37Wh. That’s not a lot of power for a 14-inch system, even one with a Celeron processor, and it leads to poor battery life. Running the Peacekeeper browser benchmark on loop drained the system in just two hours and 50 minutes, while light productivity in Google Docs increased endurance to just under four hours. These results are below average for a mainstream laptop.

Users concerned about power will be happy to know the Pavilion 14 sips energy. At idle, it uses about 9 watts with the display at maximum brightness, while load increases that figure to just 17 watts. These are the lowest figures we’ve recorded from a laptop with a 14-inch (or larger) display.

The Pavilion 14 ships with a 1.1GHz Intel Celeron 847 processor. Though not branded with the “Core” name, this processor is built on the Sandy Bridge architecture behind all 2nd-gen Core processors. A 16GB solid-state drive and 2GB of DDR3 RAM round out the laptop’s hardware.

The Chromebook’s attempt to fit in the mainstream is, ironically, what drains the laptop of value.

While the specs don’t impress on paper, the magic of Chrome OS (and the justification for cutting features) is its surprising speed. The difference between the Pavilion 14 and a much faster system can be hard to notice. Even 720p streaming video is butter-smooth in most situations, though we did notice the odd frame-skip while running video alongside five or six background tabs.

Games are another matter. The aging processor is quick enough, but comes burdened with an elderly Intel HD graphics processor that’s far slower than those found in today’s Core processors. 3D games rarely play well, and even 2D games stutter at times.

You may not believe it because of how remarkably quiet it is, but this Chromebook has a fan. Noise can only be heard in an absolutely silent room, and our decibel meter never returned a reading above ambient.

And don’t think the silence leads to excessive heat. We never recorded an external temperature above 90 degrees Fahrenheit, and the system barely feels warm to the touch at idle.

HP’s Pavilion 14 Chromebook could serve the role of being someone’s sole PC. A large keyboard, reasonable processor, and low price combine to make a very attractive low-cost system that anyone could pick up and use for most computing tasks. Battery life is the system’s only disappointment, but an extended battery that roughly doubles endurance is available.

Yet, this system’s attempt to fit in the mainstream is, ironically, what drains it of value. Smaller Chromebooks fill a niche left empty by the netbook’s death, but stores are filled with hordes of 14- and 15-inch laptops that sell between $300 and $400. Competitors like the Toshiba Satellite C855, Lenovo G580, and Dell Inspiron 15 ship with Windows 8 and for just tens of dollars more. Even HP sells this exact system, with Windows 8 and a Core i3-2377M processor, for $415 on Amazon.com.

That’s not to say the Pavilion 14 is a poor value, but we think most consumers will find themselves better served by Windows laptops sold for slightly more, as those systems are just as powerful and include functionality Chrome OS can’t match.