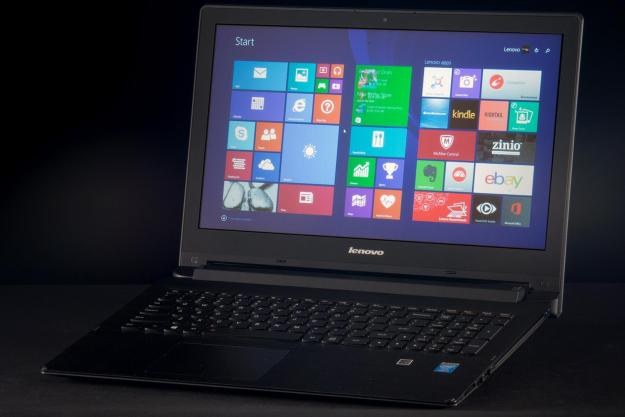 “The $679 Flex 2 15 has a few quirks, but its quick performance and solid display make it an excellent value.”

Lenovo has left no stone unturned in its search for new ways to sell computers. The company has introduced both dockable and convertible systems in a variety of sizes, and its aspirations have extended to stand-alone tablets, and touchscreen all-in-ones as well.

Most of these attempts make sense, but there have been a few odd ducks. The Lenovo Flex 2 15, a laptop with a screen that can fold backwards for touchscreen use while the keyboard serves as a stand, is one of Lenovo’s more unusual designs. The company advertises it as “more than just a laptop,” but what “more” means isn’t exactly clear.

If you can get past its identity crisis, however, the Flex 2 makes a strong case for itself. Our 15-inch review unit arrived with a 1080p display, an Intel Core i5-4210U dual-core processor running at 1.7GHz, and a 500GB hard drive. Yet, it retails for just $679. That makes the Flex 2 a solid value on paper, but does it have any notable flaws that weigh it down?

Unboxing the Flex 2 left us with a single thought at the front of our minds – “Man, no wonder it’s cheap.” Unlike its predecessor, which at least included gray plastic to add some spice, the Flex 2 15’s color palette only includes black. The Flex 2 15 could easily be sold as a budget-priced ThinkPad. All it’s missing is a track-pointer.

Build quality exceeds the uninspiring exterior, though not by much. Lenovo deserves credit for managing to squeeze an optical drive in the Flex 2 15 which, despite its large screen, is less than an inch thick. However, doing so creates a weak spot in the chassis that creaks when handled. The rest of the laptop feels adequately solid, but never overly sturdy. Plus, the display lid can flex significantly if heavy items are placed on it.

The Flex 2 15’s display hinge, which offers 270 degrees of rotation, is excellent. The screen can be pushed back until it faces opposite the “front” of the keyboard, effectively turning the keyboard into a stand for the touchscreen. While this feature can be useful (it would be nice on a plane, for instance) we think most users will ignore it and use the Flex as a standard notebook instead.

Connectivity options include three USB ports, one of which is USB 3.0, along with Ethernet, HDMI, a 2-in-1 card reader, and a combo headphone/microphone jack. Bluetooth 4.0 is standard on all models, and 802.11ac Wi-Fi is allegedly available. However, we couldn’t find the option to add it when we checked Lenovo’s website, making 802.11b/g/n Wi-Fi the standard here. This array of connectivity is adequate for most users, but we feel Lenovo should have at least added another USB 3.0 port, and a more versatile card reader would be nice.

A fine keyboard, but one that isn’t without problems

The Flex 2 15 features Lenovo’s “AccuType” keyboard, with all the pros and cons it normally carries. On the plus side, it’s spacious, and boasts good tactile feel. While it’s not as good as the keyboards on ThinkPads of old, Lenovo’s AccuType keyboard is among the best ones out there for typing thousands of words every day.

Yet this laptop, like others from Lenovo, suffers from unfortunate layout issues. The decision to include a numpad means that many keys on the right flank, like Backspace and Shift, are much smaller than usual. The numpad is also cramped, using keys that are about three-quarters the normal size.

Still, the keyboard is an overall positive, and better than average for a $600 laptop. We can’t say the same about the touchpad, though. Size is not the problem. At about four and half inches wide, and three inches tall, it’s among the largest in its class. The issue is sensitivity.

Even the slightest touch can send the mouse pointer flying to the far reaches of the display. Worse, the Charms bar in Windows 8.1 seems determined to make an appearance every time the user dares to move the mouse from right to left, prompting countless unwanted dives into that menu. The problem can be tamed by decreasing the touchpad’s sensitivity, but that didn’t entirely solve the issue, and the cursor still felt flighty. An external mouse is a must-have for this system.

The display isn’t perfect, but at least it’s 1080p

Lenovo’s decision to ship some versions of the Flex 2 15 with a 1080p touchscreen is a huge stride in the right direction. Laptop display quality has improved massively over the last three years, but only among high-end models. Most inexpensive 15-inch systems still have a 1366×768 panel, which is a bit ridiculous considering that an iPad can offer over twice as many pixels for the same price.

You should buy the Flex 2 15 if you’re looking for a laptop with strong performance and a decent screen at a low price.

1080p resolution offers excellent sharpness, even in a 15-inch laptop. However, this particular panel scored poorly in other areas. We found that it only produces 59 percent of the sRGB gamut, and suffers from inaccurate grayscale color. While the display’s maximum contrast of 470:1 beats the snot out of the Acer Aspire E5’s terrible score of 80:1, it is still short of other 15-inch systems, like the Dell Inspiron 15 7000 Series, and the Acer Aspire R7.

We’d like to see better grayscale and a wider gamut, as these problems detract from realism, and can cause issues with very dark or very colorful images. However, there are few alternatives. The Acer Aspire V3 is the only competitor that currently offers 1080p resolution for less (it sells for $599), but it doesn’t have touch.

Sound quality could certainly be better. Distortion is a problem at maximum volume, and the mid-range is often muffled, which makes dialogue difficult to hear. Yet, the speakers are loud enough to fill a living room. External speakers or headphones will be an upgrade, but the Flex 2 15’s sound system will do for most.

The Intel Core i5-4210U processor in our review unit is the second-slowest CPU the Flex 2 15-inch can be outfitted with. However, it had no trouble keeping up with the competition.

As seen above, the Flex 2 15 reached a score that’s virtually identical to the Acer Aspire E5 and Dell Inspiron 15 7000 Series. Only the IdeaPad Y50, which costs several hundred dollars more and offers a quad-core processor, performs significantly better. This laptop’s modest dual-core CPU doesn’t set records, but it will be more than adequate for most owners. The 7-Zip compression benchmark turned in similar results. Lenovo’s Flex 2 15 hit a score of 7,188, which barely lags behind the Acer Aspire E5’s result of 7,224. It also beats the Dell Inspiron 15 7000’s mark of 6,688. As expected, only the Lenovo Y50 is significantly quicker, scoring 18,790. All versions of the Flex 2 15 come standard with a 500GB mechanical hard drive that’s paired with an 8GB solid state cache. This results in a respectable PCMark 8 storage score of 2,877. That beats the Acer Aspire E5’s score of 1,977, and also defeats the Lenovo Y50, which hit 2,123. Only the Dell Inspiron 15 7000, which has a similar hybrid hard drive, beats the Flex 2 15 with its score of 2,991, but just barely. These scores all indicate that the Flex 2 is a competent day-to-day notebook. But can it handle games? We fired up 3DMark and League of Legends to find out.

The Flex 2 15’s scores are disappointing, but not surprising given its reliance on Intel HD 4400 integrated graphics. These poor performance scores are made worse by the 1080p screen, which needs much more juice to render scenes at the same detail than the Acer Aspire E5’s 1366×768 display does. The Dell Inspiron 15 7000 and Lenovo Y50, both of which offer discrete graphics, run off and never look back.

These results aren’t ideal, but remember, this system has a 1080p screen. That requires more power. Reducing resolution to 1366×768 will make most games playable, though you may still need to use low or medium detail settings.

The Flex 2 15 is a tad less than an inch thick, and weighs only 5.1 pounds. These traits, along with the flexible display hinge, make this Lenovo surprisingly portable.

Lenovo’s AccuType keyboard is among the best ones out there.

The Peacekeeper Web browsing benchmark drained a full charge in 5 hours and 42 minutes. That’s slightly worse than the Acer Aspire E5, which managed 6 hours and 4 minutes, but better than the Lenovo IdeaPad Y50’s 3 hours and 3 minutes. The Flex 2 15 also beats a number of smaller systems, including both versions of the Lenovo Yoga 2, the Acer Travelmate TMX 313, and the Toshiba Kirabook.

At idle, this notebook’s fan produces a modest hum that generates no more than 36.5 decibels of noise. That’s more than the Acer Aspire E5, but only by a decibel and a half. An environment with slight background noise can easily render the Flex 2 15’s fan inaudible. Load pushed noise up to 43.1dB. The increase is noticeable, but this result is far below the Dell Inspiron 15 7000, which makes 48dB of buzz.

Temperatures were tolerable, despite the quiet fan. We measured a maximum of 85.6 degrees Fahrenheit at idle, and 95 degrees at load. These numbers are cooler than most recently-tested laptops, including the Acer Aspire E5, and Dell Inspiron 15 7000.

The Flex 2 15 arrived with a variety of pre-installed apps, including McAfee, which prompted us to grab the full version of the software several times. Most of the included software, however, is from Lenovo itself. The company serves up a camera app, a photo editing app, a support center, and an app that recommends other apps you might want to purchase. All of these are functional, but are generally inferior to common, free alternatives.

Also included is Lenovo Companion, a weird blend of a control center, update app, and storefront. You can use it to buy an extended warranty, update Windows 8.1, or learn how to connect to a television. Though potentially useful, the app simply throws ideas at the user and hopes something sticks, which is a confusing approach that’s sure to alienate some owners.

No one should buy the Lenovo Flex 2 15 because of its trick hinge. Yes, getting the keyboard out of the touchscreen’s way can be useful, but it’s a minor convenience we think many owners will try once and promptly forget about. Windows 8.1 isn’t a great touch operating system, so using the touchscreen alone is rarely practical.

You should buy the Flex 2 15 if you’re looking for a laptop with strong performance and a decent screen at a low price. Compared to its predecessor, and to similarly priced competition, the $679 Flex 2 15 is quick, easy to use, and boasts excellent image quality. Only Acer’s Aspire V3, which has almost identical hardware, but lacks a touchscreen, can provide similar value.

The Flex 2 15 isn’t perfect, but its flaws are outweighed by its perks. Just make sure that, whatever you do, you purchase a model with the 1080p display. Many configurations have a 1366×768 panel instead, and picking such a variant would ruin this notebook’s most important advantage.