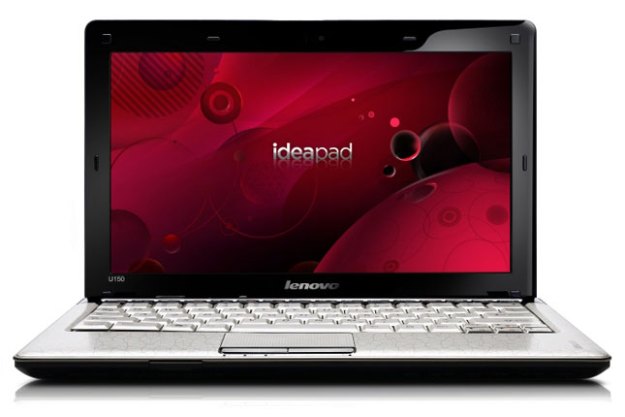 “The humble U150 has a compact, lightweight chassis fit for a netbook, but is destined for much more thanks to superior hardware – including an Intel Core 2 Duo CULV processor – shoehorned inside.”

Call it a netbook if you must, but Lenovo’s U150 shines where many that share the category name crumble and fail. With an 11.6-inch high-resolution display, dual-core processor and a keyboard fit for the novelist, Lenovo’s U150 stands as one of the most livable ultra-portables we’ve tested.

Of course, the extra hardware also prices it out of the typical $400 netbook range. As equipped, our review model runs $749, but a more basic model with 3GB RAM and a 280GB hard drive runs a more reasonable $649.

Like all of Lenovo’s IdeaPad notebooks, the U150 comes dressed in bold, love-it-leave-it styling. The lid has been imprinted with a web of interconnected dots and lines – like a diagram of a mesh network torn out of a computer science textbook – that also carries over to a more subtle imprint on the inside wrist rest. We weren’t the biggest fans of the rather busy finish, but can see it finding more fans in a female audience, especially the bright red variant.

To correspond with the specced up hardware, Lenovo has also equipped the U150 with a couple of ports not typically found on your $400 bargain bin netbooks. Most notably, you’ll get a eSATA port for high-speed accessories and HDMI video output on the left-hand side, along with the less distinctive VGA port. Wisely, the eSATA port actually doubles as a USB port, breathing much more life into a powerful-but-niche standard. The right hand side offers a more typical array of two USB ports, Ethernet and power ports, along with dedicated headphone and microphone jacks, and a hard switch for Wi-Fi. The front hides a very discreet SD card slot below the touchpad.

Like the larger U350, build quality on the U150 leaves a bit to be desired – certain plastic panels have a bit more flex than we would like – but the significantly smaller size leads it to feel sturdier than its larger brother, even if the manufacturing process is basically the same. For a netbook, we’ll deal with it, but it doesn’t convey the higher quality that we typically expect when stepping away from that segment to a more premium price-point.

The six-row keyboard adopts the more traditional layout rather than the trendy “Chiclet” style, but we’re glad to see this classic. The keys have a substantial spring to them, feel comfortably spread out, and generally worked just fine for the heavy typing we subjected it to. Lenovo prints all the shortcut keys (volume, brightness, fast forward, etc.) in orange above the half-height F keys, which can be actuated using a function key on the very bottom left. Unfortunately, this bumps the control key to the right a slot, which some users may find initially disorienting.

The touchpad on the U150 wisely eats up all the space between the bottom row of the keyboard and the edge of the notebook, which leaves a larger-than-average mousing area. It’s made even more useful by its multi-touch capabilities: dragging with two fingers acts as a shortcut to scrolling, just like on a MacBook. A matte finish and incredibly subtle grid of dimples also keep it smooth to glide a finger across and free from the tackiness we sometimes find on cheap models.

For an 11.6-inch display, the screen on the U150 looks amazingly sharp. Credit the 1366 x 768 resolution, which is on par with what we found on the superb (and twice as costly) Sony Vaio X. As we noted there, the fact that this resolution routinely appears on screens up to 16 inches across means you get work real estate comparable to a much larger laptop, on a small screen. If you don’t mind squinting a bit now and then – or wearing the old reading glasses – this is a huge productivity benefit.

Although the glossy screen makes the U150 a bit awkward outside in the sun, it also lends it a crisp, vivid look indoors, with excellent brightness and color accuracy. We do wish, though, that like Lenovo’s ThinkPads, it would rotate back 180 degrees, rather than the 135 or so it manages.

While the U150 contains many of the same obnoxious software components that we ripped the larger U550 for, we have to note that we actually found fewer here. Despite the modest improvement, we still find Lenovo’s tendency to burden IdeaPads with a slew of unwanted software annoying.

On paper, the 1.3Ghz Intel Core 2 Duo powering the U150 affords it very little distinction from the 1.6GHz Intel Atom chips in most inexpensive netbooks. Even the PCMark Vantage score – 1846 PCMarks – doesn’t offer much of a divide from a score of 1,500 or so that we might see from an Atom-powered system. Fortunately, GHz and benchmarks can be misleading. Performance on this machine is a major step up from the ordinary.

For starters, the dual-core processor seems to give it a spring in its step that Atom netbooks just don’t have around the desktop. It feels totally comfortable with Windows 7, and makes its way around word processing, chat, and browsing without missing a beat.

Where does the extra power really make itself felt? Open YouTube. While 720p YouTube videos typically drag netbooks to a crawl, the U150 banged it out without complaint. Hulu’s 480p content gave the system enough struggled to make videos unpleasant at that quality, until we installed Adobe Flash 10.1 beta 3, which offloads some of the processing load to the U150’s Intel GMA X4500 and solved the problem.

With Apple’s QuickTime videos (encoded using the H.264 codec), the U150 played 1080p content, but stuttered and spat too much to enjoy watching, revealing the upper limits of this machine. While not quite up to par with the multimedia capabilities most buyers would expect from a more powerful machine, we think the U150 will get most buyers close enough not to care, taking the screen size into account.

The U150’s battery delivers between four-and-a-half and five hours with brightness to full and Wi-Fi going. While that’s a hair less than you might expect from an Atom processor suckling off the same six cells, we found the boost in performance an adequate tradeoff.

Many companies have built CULV-powered notebooks to bridge the awkward gap between netbooks and high-priced ultraportables, but Lenovo’s U150 comes about as close as we’ve ever seen to doing it right. Almost all the factors that make netbooks untenable for long-term computing have been fixed here, while preserving a blend of the low price and light weight that makes them so attractive. For buyers not satiated by the latest Atom-powered boxed hitting the market, but not ready to spend four figures on an alternative, Lenovo’s U150 makes an ideal middle ground.