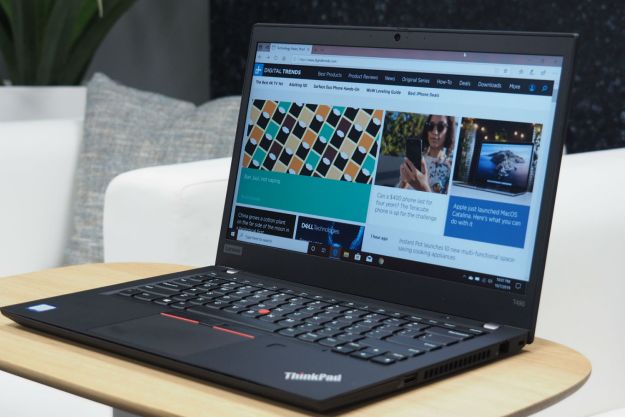 “The ThinkPad T490 is a classic workhorse.”

Want a great price on a laptop this holiday season? Check out our favorite Black Friday laptop deals.

The Lenovo ThinkPad T490 is a boring laptop. But sometimes boring is good — like economy sedans that are unparalleled at getting human beings from point A to point B with little or no fuss. Some people want that security and reliability in a laptop. The ThinkPad T490 aims to fit the bill.

Does the ThinkPad T490 live up to its reputation of being a rock-solid choice for discerning ThinkPad lovers who don’t need the flair of the X1 line?

It’s becoming less and less obvious what a ThinkPad is supposed to look like. The ThinkPad X1 Carbon is close, but it adds a carbon fiber weave to the lid of the 4K version that stands out in a way that ThinkPads typically don’t. And don’t get me started on the ThinkPad X1 Yoga‘s all-aluminum chassis. The ThinkPad T490 is much more in line with what a diehard ThinkPad fan wants to see — it’s black on black, with only a few red accents breaking up the monochromatic color scheme.

The chassis is constructed of plastic with glass fiber backing, and it feels sturdy enough in hand. It also enjoys that soft-touch matte finish that make traditional ThinkPads so inviting. If you like ThinkPads, it’s because you know they’ll last forever, you’ll feel the same about the ThinkPad T490. I do have to note some flex in the display, which the X1 Carbon also demonstrated, but the rest of the chassis is solid enough. You need to look to the all-metal X1 Yoga for a more rigid chassis.

One feature you won’t find on the T490 is thin bezels. They’re downright chunky. The laptop has been shrunk down overall from the previous T480 model. It’s thinner at 0.7 inches and lighter at 3.17 pounds at its heaviest compared to the heftier T480. It’s a welcome drop in size, which extends to the T490’s width and depth as well. Nobody will mistake this for a MacBook or XPS, but that’s the point. ThinkPads dance to their own groove.

Seriously, that’s a lot of connectivity, and all the important bases are covered. There’s even a micro-SIM slot in case you want to add LTE data service and be truly portable. My review unit included the Intel 9560 802.11AC radio with Bluetooth 2.0, but you’ll get Wi-Fi 6 if you opt for the upcoming 10th-gen versions (more on that later).

Another ThinkPad thing that the T490 gets right is its keyboard. I found it as excellent as always, with plenty of depth and a clicky, precise mechanism. The white lettering on black keycaps is just as visible as always, although in a weird twist, backlighting is optional and my review unit didn’t have it. That’s a bummer, and it’s one more reason for me to voice my preference of HP’s Spectre keyboards that I love so much.

The usual red TrackPoint nubbin is right there in the middle of the keyboard, and it works as well as always. Of course, that also means two extra buttons tacking some space from the touchpad, but that’s no big deal. The touchpad is big enough, and it’s a Microsoft Precision version, meaning Windows 10’s various multitouch gestures are well-supported.

There’s no touch display, alas, although that’s an option for both the Full HD and the WQHD (2,560 x 1,440) panel. I’ve grown used to touch displays — it’s so much easier for scrolling long web pages and tapping the occasional pop-up. Not everyone will miss its absence, but I certainly did.

Windows Hello support is provided by a default fingerprint scanner that worked reliably in my testing, and an optional infrared camera for facial recognition. Privacy is further enhanced by the usual ThinkPad ThinkShutter that can physically cover the webcam and keep you safe from prying eyes.

Good performance, depending on your need

My review unit was limited to the 8th-gen Core i5. That’s a great quad-core chip for basic productivity tasks, and the ThinkPad T490 is no exception. It scored just a little lower than average on the synthetic GeekBench 4 benchmark, at 4,158 for single-core and 12,395 for multi-core. And, it took just over five minutes to complete our Handbrake test that converts a 420MB video to H.265.

The ThinkPad X1 Carbon and X1 Yoga performed similarly, although just slightly quicker. Some other laptops with the same CPU were faster, we should note, including the Lenovo ThinkBook 13s that finished the Handbrake test about a minute faster. So, you can get faster laptops with Core i5s, and presumably, the T490 itself will take a step forward once it is available with 10th-gen Comet Lake CPUs in the next several weeks.

Interestingly, and this is a first: You can configure the ThinkPad T490 with a discrete NVIDIA GeForce MX250 GPU. That’s entry-level discrete graphics for sure, but it beats out the Intel UHD 620 integrated graphics in my review unit. That chip will not only game better but will provide a boost for creative applications.

The ThinkPad X1 Carbon and X1 Yoga that I tested both had 4K displays and the same roughly 50 watt-hours of battery capacity as the ThinkPad T490. Suffice it to say that their battery life was underwhelming.

Enter the T490 with its low-power Full HD display and economical Core i5. In a word, battery life was excellent. Starting with our most real-world test, running through a series of popular and demanding web sites until the battery ran out, the T490 lasted for a very strong 11.73 hours. That’s near the top of our results and beats out most laptops. It also implies that the T490 will last a good portion of a workday running the kinds of tasks favored by productivity users.

Battery life in laptops keeps getting better, and the T490 has kept up.

If you like to binge Netflix after a long day’s work, then the T490 will suit your needs as well. It lasted nearly 17.5 hours in our local video test, again a score that’s near the top of our list. If you’re running a demanding application that stresses the CPU, the T490 will get you around four hours.

Battery life in laptops keeps getting better, and the T490 has kept up. This is a laptop that will keep you going all day long away from a plug, which is a good thing since Lenovo dropped the modular bridge battery option that graced the T480. With this kind of battery life, though, and with a quick charge capability that will return the battery to 80 percent in just an hour, and you’re less likely to miss the ability to hot-swap batteries.

I was prepared to give the ThinkPad T490 a higher score in this review, but I’d left the display test to last. Unfortunately, the Full HD display in my review unit is flat-out disappointing for a premium laptop, and that’s going to cost the T490 some points.

You won’t hate the display, but you won’t love it, either.

To make matters worse, the display also isn’t all that bright, maxing at just 273 nits. We like to see displays able to hit 300 nits or greater — this is the point at which a display has a chance of outshining bright ambient lighting. The T490’s contrast is also poor at 670:1 — recent premium laptops are closer to 1000:1, and you can tell the difference. Black text on white backgrounds, for example, don’t pop, making for a drab experience.

Subjectively, the display is barely acceptable for the T490’s main focus on productivity work. You won’t hate it, but you won’t love it, either.  More important, it’s not as pleasant to use as most other premium displays I’ve reviewed, and the laptop suffers for it.

The ThinkPad T490 lives up to its status as the line’s workhorse option. It’s not exciting to look at — unless you really love that iconic ThinkPad look and feel — but it’s well-built, it performs well, and it lasts all day and then some on its battery.

However, the display is a huge disappointment. It’s just not good enough for the price. That’s why I can’t recommend the ThinkPad T490 to most people in spite of its excellent keyboard and durable construction.

I’ve mentioned a couple of alternatives already, including the ThinkPad X1 Carbon and X1 Yoga (if you want a 2-in-1). Both of those are a little swankier, a little thinner and lighter, and they perform just as well. They also offer 4K display options (and likely better Full HD displays) that the T490 doesn’t enjoy.

The ThinkPad X1 Extreme is another option if you’re looking for crazy-fast components and superior expandability, but don’t forget about the Dell XPS 13 if you don’t need a full the 14 inches.

The ThinkPad T490 will last through the apocalypse, and still probably have a little charge left. It’s also well-equipped and connected, and if you wait for the 10th-gen CPU versions then you’ll be fully up to speed. You only get a year’s warranty, which is a bummer, but Lenovo is happy to sell you a longer one with great service and support to go with it.

No, unless you care most about the keyboard or durability.

The best external hard drives for 2022
Best Microsoft Surface Laptop deals: Prices from $490
Best Prime Day Laptop Deals: What to expect from the second sale
Best Prime Day Chromebook Deals: What to expect in October
Edit Tweet feature is finally rolling out to Twitter Blue subscribers
Adobe Free Trial: Try Creative Cloud for free
IPVanish Free Trial: Try it for a month, no strings attached
The HP Pavilion laptop is only $500 with this limited-time deal
This 11-inch Chromebook from HP is only $98 at Walmart today
This HP Omen gaming PC with RTX 3070 is $500 cheaper today
This dangerous vulnerability tricks researchers by mimicking old threats
GPU prices and availability (October 2022): How much are GPUs today?
The best Chromebooks for 2022: great choices at every price point