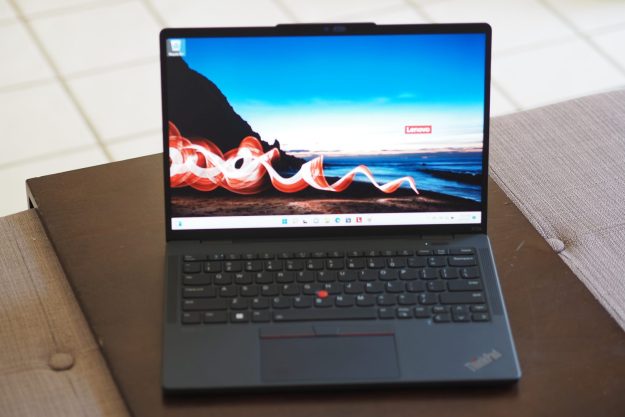 “The Lenovo ThinkPad X13s lives up to the Windows on ARM promise for battery life, but still lacks performance.”

Apple’s M1 is still sending shock waves through the industry. On one hand, the ThinkPad X13s is the Windows equivalent.

Its ARM-based chip, the Qualcomm Snapdragon 8cx Gen 3, offers some of the same benefits as the M1 or M2. It’s thin and light, and the battery life is fantastic. For some, that alone makes the ThinkPad X13s an attractive choice. But due to mediocre performance, it’s yet another example of Windows on ARM remaining a niche option for most people.

As usual, there’s a significant discrepancy on Lenovo’s website between the retail price and the “sale” price. Right now, the entry-level ThinkPad X13s is $1,301 (retail $2,169) for a device with a Qualcomm Snapdragon 8cx Gen 3 CPU, 16GB of LPDDR4X , a 512GB PCIe 4 SSD, and touch display. That’s a pretty killer deal, especially for that configuration.

At the high end is a $1,571 (retail $2,619) configuration with the Snapdragon processor, 16GB of LPDDR4X , a 1TB PCIe 4 SSD, the non-touch display, and WWAN support. My review configuration was the entry-level model except for adding WWAN capabilities, which boosts the price to $1,385.

I’m unaware of any other business-class Windows on ARM to compare to the ThinkPad X13s. In the more conventional Intel space, the Dell Latitude 7330 is a 13-inch laptop with the same business features, and it’s more expensive than the ThinkPad at its sale prices.

The Lenovo ThinkPad X1 Carbon Gen 10 is another larger laptop at 14-inches that offers the same ThinkPad experience at slightly higher prices. Finally, the HP Elite Dragonfly G3 offers an equally small and light form factor with connectivity, but it’s quite a bit more expensive.

Look at the ThinkPad X13s from a distance and you’ll immediately recognize it as a member of the line. It’s all black (Thunder Black, in fact), has the red dot on the “i” in the ThinkPad logo on the lid (albeit without an LED) and on the palm rest, and the red TrackPoint nubbin stands out in the middle of the keyboard.

Up close, though, its edges are more rounded than the typical ThinkPad’s, and there’s a prominent reverse notch at the top of the display for the webcam and IR camera. These small changes make the ThinkPad X13s stand out on its own. It’s certainly more striking than the Dell Latitude 7330, which is boring by comparison.

The ThinkPad X13s is constructed of two materials, a magnesium-aluminum alloy in the lid and a glass fiber reinforced plastic in the chassis. I found the lid quite sturdy, along with the bottom of the chassis, but there was some slight flexing in the keyboard deck. It wasn’t egregious, but it was enough to keep the ThinkPad a step behind like the Dell XPS 13 Plus, HP Spectre x360 13.5, and MacBook Air M1 in overall rigidity. The hinge is quite stiff, requiring two hands to open the lid, but it holds the display firmly in place.

Unsurprisingly, the laptop’s connectivity is quite limited. There are two USB-C 3.2 Gen 2 ports (no Thunderbolt 4 support due to the Qualcomm chipset), a 3.5mm audio jack, and an optional NanoSIM slot for WWAN versions. Wireless connectivity includes Wi-Fi 6E and Bluetooth 5.1, with WWAN optional.

The ThinkPad X13s is built around Qualcomm’s Snapdragon 8cx Gen 3 ARM processor, an eight-core CPU with four Cortex-A78 cores running at 2.4GHz and four Cortex-X1 Prime cores running at 2.95GHz. It’s the fastest processor Qualcomm has yet made for the PC and promises increased performance over previous generations. Its primary direct competition is Apple’s silicon, specifically the M1 and M2 CPUs that have provided class-leading performance in two iterations of the MacBook Air. Note that like Apple’s MacBook, the ThinkPad X13s is fanless and so completely quiet.

Of course, that’s just one synthetic benchmark and doesn’t tell the whole story. Unlike in previous Windows on ARM generations, I was able to run our Handbrake test that encodes a 420MB video as H.265. Of course, that doesn’t mean that Handbrake is optimized for ARM. And indeed, the ThinkPad X13s took 505 seconds to complete the process, compared to the MacBook Air M2 at 151 seconds and the Core i5-1235U at 134 seconds. I also managed to run the Cinebench R23 video-rendering benchmark, and the ThinkPad X13s scored 593 in single-core and 2,221 in multi-core. That compares to the MacBook Air M2 at 1,600 and 7,938 and the Core i5-1235U at 1,668 and 7,671.

Clearly, Qualcomm has a way to go before it catches up with Apple, Intel, and AMD. Even so, the ThinkPad X13s was fast enough during my testing for the usual productivity tasks. I could keep quite a few browser tabs open and run background apps like Outlook, Teams, and others without any noticeable hesitation. But I wouldn’t rely on the laptop for the most demanding workflows or creative tasks.

The ThinkPad X13s wouldn’t run the 3DMark Time Spy test, our primary gaming synthetic benchmark. And I didn’t see a reason to try running Fortnite, our go-to game for integrated graphics. It’s doubtful that the Snapdragon GPU can play anything more than the oldest titles (should they install and actually run) at low resolutions and graphics. And that’s OK because by no means is the ThinkPad X13s meant to be a gaming laptop.

According to Lenovo, three displays are available for the ThinkPad X13s, and they are all 13.3-inch 16:10 WUXGA (1920 x 1200) IPS panels. There’s an antiglare 300-nit touch display, an antiglare 400-nit low power non-touch display, and a 300-nit non-touch display. My review unit used the latter panel, which seemed like a quality display during my testing. Colors were dynamic and natural, the display was bright enough for my usual working conditions, and blacks seemed true and not grayish.

Unlike with previous Windows on ARM I’ve reviewed, the ThinkPad X13s supported my colorimeter. That’s significant because it shows the platform has expanded its peripheral driver support and the applications it will run. And according to my colorimeter, the ThinkPad’s display is a solid productivity panel. It was bright enough at 341 nits, above our 300-nit standard but lower than the other displays in our comparison group. Its contrast was high at 1,380:1, well above our 1,000:1 threshold for premium displays. Colors were at the premium laptop average at 100% of sRGB and 77% of AdobeRGB, with a color accuracy of DeltaE 1.12 (1.0 or less is considered excellent).

The ThinkPad X13s display is excellent for productivity workers and media consumers, but it doesn’t have quite the color width for demanding creators.

Two upward-firing speakers provide audio, one on each side of the keyboard. They offered adequate volume during my testing, with clear mids and highs and the usual lack of bass. They’re good enough for YouTube and videoconferencing, but Netflix bingers and music listeners will want to utilize some headphones.

Open the lid, and you’ll find the familiar ThinkPad keyboard with large, sculpted keycaps and plenty of key spacing. The switches were lighter than some ThinkPads I’ve tested, with a snappy bottoming action and a quick response that made for fast, comfortable typing. I’m not always a huge fan of ThinkPad keyboards, sometimes finding them too stiff, but this one ranked up there with HP’s Spectre and Dell’s XPS keyboards. The layout is different from the typical Windows 11 keyboard, following the ThinkPad pattern, including the left Fn and Ctrl buttons being swapped. There are several special function keys, including a couple for videoconferencing and one for opening Lenovo’s Commercial Vantage utility.

The touchpad is wider than on some ThinkPads, but it still loses some space to the buttons that service the TrackPoint nubbin. The touchpad glass surface is smooth and comfortable and provides reliable support for multitouch gestures, and the button clicks are confident and quiet. The TrackPoint nubbin works as well as always for anyone who prefers that control. The display on my review unit wasn’t touch-enabled, but there’s an option for a touchscreen.

The webcam utilizes a 5MP sensor and is quite high resolution, and Lenovo uses some AI features to calibrate the color and brightness of the image regardless of lighting conditions. There are options for applying high dynamic range () to video and enabling automatic framing to keep the user’s face in the center of the image.

The keyboard includes a dedicated key for shuttering the webcam, and there’s another key for switching off the microphones.

The ThinkPad X13s is Microsoft Pluton ready, which means there’s a security processor embedded in the Snapdragon 8cx Gen 3 to protect against various threats and physical attacks. The laptop also includes Lenovo’s self-healing BIOS to recover the machine in the case of corruption or attack.

The ThinkPad X13s has 49.5 watt-hours of battery capacity, which is a decent amount for a laptop with the ultra-efficient Qualcomm ARM CPU and a Full HD+ display. It’s less than the Lenovo Flex 5G that comes in at 60 watt-hours but more than the HP Elite Folio‘s 46 watt-hours.

Take the Flex out of the equation, and I’d say the ThinkPad X13s did very well in battery tests. It hit 11.75 hours in our web-browsing test that cycles through a series of demanding websites and 19.5 hours in our video test that loops a local Full HD Avengers trailer. Those are strong results compared to most Intel and promise all-day battery life and then some. The Elite Folio was close enough to the same results. However, the Flex did significantly better in both tests, more than the increase in battery size would predict, making it the champ among the Snapdragon 8cx machines we’ve tested. And the Apple MacBook Air also did better than the ThinkPad, both the M1 and M2 versions, although neither beat out the Flex .

All-day battery life? Check. Always-connected internet? Check. Excellent performance? Not so much. That pretty much sums up the ThinkPad X13s and Windows on ARM generally. Qualcomm and Microsoft have made some strides, for sure. The Snapdragon 8cx Gen 3 is the fastest yet, and Windows on ARM supports more apps and drivers than before. But it’s still nowhere close to Intel, AMD, or Apple when it comes to an overall experience.

For the right person, though, the ThinkPad x13s is a nicely portable laptop with great battery life. Everyone else should wait to see what’s coming next.

There are more available today than just a year or so ago, but the population of Windows on ARM machines is still rather small. The Lenovo Flex is unavailable, but the HP Elite Folio can still be purchased. It’s not as fast, but it offers similar battery life and connectivity. It’s also a fascinating convertible 2-in-1 with a gorgeous look and a comfortable feel.

If you’re primarily looking for a thin and light laptop and are enamored of the ThinkPad brand, then the ThinkPad X1 Nano is a solid option. It’s one of the smallest and lightest at just 1.99 pounds, offering solid productivity performance and battery life that rivals the ThinkPad X13s. It doesn’t provide WWAN support, however.

Finally, the Apple MacBook Air M2 is a highly competitive alternative for anyone who doesn’t live for and doesn’t need . It’s fast, incredibly well-built, has some of the best battery life, and it’s one of the thinnest at 0.44 inches.

The Lenovo ThinkPad X13s is built well enough that you should expect years of service. It’s questionable whether the CPU will keep up with Windows on ARM’s development, but that remains to be seen. The industry-standard one-year warranty is disappointing on a ThinkPad.

Yes, if you don’t need the fastest performance but want long battery life and connectivity. The ThinkPad X13s is a great laptop for all but the most demanding users.