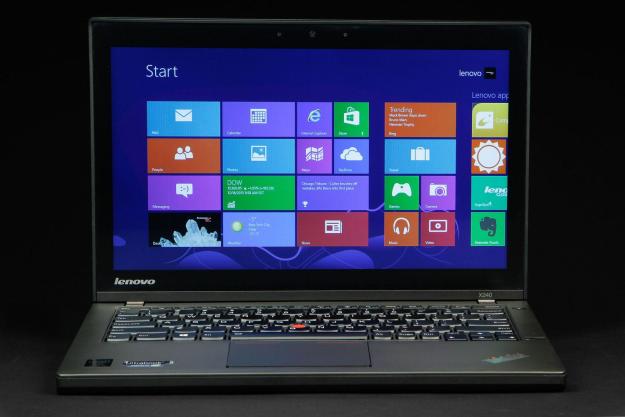 “Long battery life, a bright IPS screen, and one of the best typing experiences available make this the best compact business laptop we’ve tested yet.”

Lenovo’s ThinkPad X240 business laptop doesn’t offer much in the way of drastic changes from the previous-generation X230. But that’s largely because that laptop, like the earlier X200 models that preceded it, was one of—if not the—best compact business laptops available.

The X240 is a bit thinner and lighter, measuring 0.8-inches thick and weighing 3.2 pounds (with the standard 3-cell battery), making it compact enough to fit into Intel’s Ultrabook category. But in these days of super-sleek laptops, the X240 stands out for emphasizing substance over style.

Lenovo has extended the length of the wrist rest, increased the size of the touchpad (by removing the physical buttons for the iconic TrackPoint stick) and added an optional IPS touchscreen.

Also, there’s now both an internal and an external battery. So road warriors can swap out the external battery without having to power down. But if you opt for the extended 6-cell battery, you may not ever need to swap out cells. With the extended battery, our review unit lasted over 17 hours on our light-load battery test.

If you’ve ever owned a ThinkPad, the X240’s matte-black exterior will look awfully familiar. And with its carbon fiber lid and magnesium chassis, the laptop feels like a tank compared to most consumer-grade laptops. Our only minor complaint: Lenovo has ditched the soft-touch (rubber-like) lid of previous models for a smoother matte, dark grey finish on the X240, which seems to pick up grease stains and smudges fairly easily.

Port selection is good, as we’d expect. The right side houses a lock slot, Ethernet, SD and SIM card slots, a USB 3.0 port (with sleep charge abilities), and a headset jack. On the left edge lives a rectangular power jack, a VGA port, another USB 3.0 port, and a Mini DisplayPort. A Smartcard slot is also available above the DisplayPort. And for added security, a fingerprint reader is an option (included in our review model). It lives on the right edge of the keyboard, near the arrow keys.

Dell’s competing Latitude E7240 has a third USB port, but sacrifices VGA—a connector many business users refuse to give up, because so many old office projectors don’t have digital inputs.

IPS screen is a huge improvement

If there’s one thing we weren’t so keen on with the previous X230, it was its average-performing screen. Now, you can opt for an IPS panel and touch (both of which shipped with our $1,555 review configuration). The IPS panel costs $80 extra over the X240’s base price (currently $860), and touch tacks a hefty $200 premium on top of that.

Whether or not touch is a priority for you, we think the IPS panel is worth the money. It’s very bright, measuring 328 nits with our Datacolor Spyder sensor, and we noticed zero viewing angle issues. The panel was able to produce 70 percent of the sRGB spectrum, which isn’t stellar. But it’s still far from what we’d call “bad” for a business laptop.

The downside is, for the moment at least, you can’t get a model of the X240 with a 1080p screen. All configurations are currently stuck at the lackluster 1,366×768. Again, that’s not a bad resolution for a screen this small. But if you crave a higher-res screen, hold tight for a bit: Lenovo tells us a 1080p option should ship sometime in January of 2014.

The big change for the X240 over last year’s model on the input front is the bigger touchpad. Previous models had fairly cramped mousing surfaces, which don’t work that well with Windows 8’s multi-touch gestures. This time, though, the touchpad is a much more reasonable 4.5 inches, diagonally.

Lenovo has extended the length of the wrist rest, increased the size of the touchpad and added an optional IPS touchscreen.

The touchpad also works quite well in general. Combined with the pointing stick and touchscreen, the X240 offers about the best cursor control available from a Windows laptop.

Just like the previous model, the Chicklet-style keyboard on the X240 is evenly backlit, spill-resistant, well laid out, and about as comfortable to type on as any other laptop—especially those that are this small. The comfort level for lengthy typing is also improved because Lenovo lengthened the wrist rest area compared to previous models, so your palms will have space to rest comfortably. This will especially be a boon for touch typists with large hands.

Overall, the X240’s input devices are excellent, and slightly better than the X230. Still, if we had to think of a detail that could use improving, we’d like to see a more textured material used for the keys. Those on the X240 feel a bit slippery.

Haswell and an SSD make for solid performance

Our review model shipped with a 4th Generation Core i5-4200U processor (one step up from the base model). There are two more powerful CPUs are available as well, if you do a lot of CPU-intensive work. Also in our system is 8GB of RAM (the maximum available), and a 256GB SSD (there’s also a 128GB option, as well as hard drives in 500GB or 1TB capacities).

The well-balanced collection of components leads to good performance. In PCMark 7, which measures a system’s overall performance, our X240 review unit racked up a score of 4,665, much better than the Toshiba’s Tecra Z40 business laptop, which scored just 2,664 on the same test. The Tecra has a more powerful Core i7 CPU, but lacks a solid-state drive, which PCMark weighs quite heavily.

Strictly looking at CPU performance, the X240 doesn’t dominate, but is still more than respectable. In the 7-Zip Compression test, the ThinkPad scored 7,075 to the Tecra Z40’s 7,121.

As is often the case with business laptops, graphics performance is handled by Intel’s integrated graphics on the X240—specifically HD 4400, the pixel pushing silicon in Toshiba’s Tecra Z40. The Tecra does a bit better on the mid-range 3DMark Cloud Gate test, scoring 4,294 to the X240’s 3,861. That difference, though, isn’t likely to be noticeable anywhere other than benchmarks. With most Intel-powered Ultrabooks running current-generation chips, you should be able to play most modern games at reduced settings. The X240’s lower-resolution screen will let you switch on a bit more eye candy. but by no means should you consider this a gaming machine.

Quiet, but not always cool

Aside from its limited graphics abilities, the other reason you may not want to game heavily on the X240 is that it can get pretty hot when pushing the CPU or GPU very hard. To be clear, under most normal circumstances like video streaming, Web browsing, or doing Office tasks, the X240 stays reasonably cool. But when we maxed out the CPU or GPU, the bottom left of the laptop, near the fan vents, got as hot as 107.5 degrees Fahrenheit. That’s much warmer than the Tecra Z40’s top temp of about 93 degrees under the same testing conditions. Then again, the Tecra is a larger (14-inch) laptop, which allows for more efficient cooling.

We also ran into an issue with the X240’s fan not spinning up to cool the system down when it should. When we first started temperature testing, the fan refused to kick on until the laptop got to a frighteningly toasty 150 degrees. But that seemed to be a one-time glitch; once we rebooted the laptop, the fan functioned normally from then on, keeping the laptop much cooler (though still a bit warmer than we’d like in some scenarios).

Speaking of the X240’s fan, it never got loud enough to register above the 40dB baseline in our testing environment, so it shouldn’t bother most users. It is, though, audible in a quiet room, particularly when its pitch changes as it’s speeding up or slowing down.

With the standard 3-cell battery, combined with the three-cell internal battery, the X240’s longevity is pretty good, but not outstanding. It lasted 8 hours and 13 minutes in our light-load Reader’s Test, and 3 hours, 35 minutes on the more-demanding Peacekeeper Web browser rundown test.

If you crave long battery life, you should opt for the six-cell extended battery. It adds bulk to the laptop but it only costs just $5 more from Lenovo.

But if you crave long battery life, you should opt for the six-cell extended battery. It adds bulk to the laptop, and a bit over a half pound to its weight. But it only costs, somewhat amazingly, $5 more than the standard battery when you buy from Lenovo. And with the bigger battery, the X240 lasted 17 hours and 38 minutes on the Reader’s Test, and 7 hours and 33 minutes in the Peacekeeper benchmark. The latter score is more than an hour longer than the 13-inch MacBook Pro (which we touted for its long life) lasted on the same test.

With the extended battery, the X240 lasts a very long time, and remember that the internal 3-cell battery means you can swap out cells easily without having to power down. But if the longest battery life possible is what you’re looking for, you may want to consider the slightly larger, 14-inch ThinkPad T440s. That model, with the same extended battery, lasted nearly twice as long on the Peacekeeper test—an amazing 14 hours and 32 minutes.

There’s a lot to like about the X240—especially if Lenovo delivers on the optional 1080p IPS panel in the near future. The company has tweaked a few things here and there, mostly for the better (although we still miss the rubber-like lid), while leaving much of what was already excellent about the X230 alone.

You could certainly argue that the X240’s price is high, especially if you’re used to much more affordable (and a lot less durable) consumer laptops. But Dell’s very similar Latitude E7240 business line seems to be a bit more expensive for similar configurations. So we wouldn’t say the X240 is expensive for its class.

Dell does have Lenovo beat when it comes to basic warranty length. The E7240 comes with three years of coverage (including hardware and on-site service). The X240 ships with one year of coverage standard. And if something goes wrong with the X240 in that time, you’ll have to ship your unit to Lenovo for service.