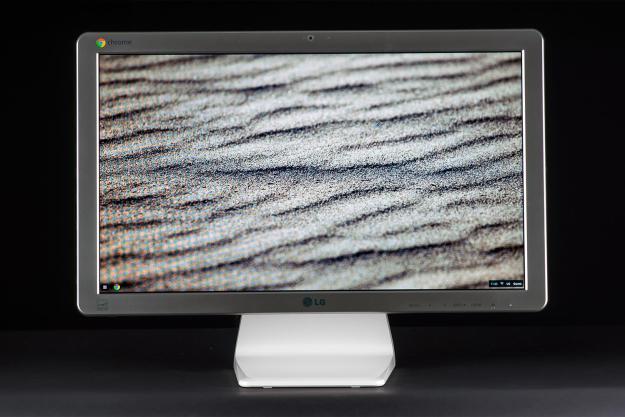 “Fast, affordable, and blessed with a solid display, the LG Chromebase is the best all-in-one you can get for under $400.”

Yet, there’s no reason that Chrome OS must be paired with a small, almost netbook-sized computer in order for such systems to gain a growing fanbase. In fact, its dependence on the Internet may mean that the desktop is the true home of Chrome OS

LG’s new Chromebase tests that theory by teaming Google’s Chrome OS with an Intel Celeron dual-core processor, 2GB of RAM, a 16GB SSD, and stuffing that into a 21.5-inch 1080p monitor. The system comes complete with a keyboard and mouse, making it a true all-in-one. Yet, it’s priced at a surprisingly low mark of $349.

Does it make sense to ditch Windows-based desktops and hook up with Google and LG instead?

The LG Chromebase looks sharp. The system’s white exterior, silver trim, and rounded aesthetic give it a friendly, inviting glow.

Still, this is an inexpensive desktop, and we can see plainly see evidence of that fact. For example, while the stand is easy to assemble, it only tilts. Plus, it wobbles when placed on an unsteady surface. The plastics used to construct every panel here, though far from luxurious, are at least tightly woven together.

Connectivity options consist of four USB ports, one of which is 3.0. You’ll also find Ethernet, HDMI-in, and a combo headphone/microphone jack as well.

This isn’t bad for an affordable rig, but only two of the four USB ports are vacant because the included keyboard and mouse are both wired. Bluetooth can be used to free up those ports, but you’ll have to ditch the provided peripherals for a third-party set. There’s also no optical drive, though it hardly matters. Wi-Fi connectivity comes courtesy of 802.11b/g/n. There’s no AC support here.

The display settings that you can adjust on the Chromebase are activated through touch controls located along the screen’s lower right edge. Like most touch-sensitive buttons, they can be finicky, and sometimes require a few strokes before they do what they’re supposed to.

Strangely, the menu itself is broken up into two sub-menus. One controls brightness, and can be used to switch between wide-screen and “original” view if the monitor is connected to a 4:3 source. The other menu, which can only be accessed by hitting menu and then scrolling down to a “next menu” button, includes several tabs which contain more advanced contrast and color controls.

Other options include sharpness, black level, overscan, and a selection of gamma and color temperature presets. Precise color adjustment is available for red, blue, green, magenta, cyan, and yellow, but the range to which you can alter each is fairly narrow. Users must drastically change the color settings to have any noticeable impact on image quality.

The only other display setting available is a so-called “reader mode,” which adjusts brightness and color in an attempt to reduce eye strain. This makes a sliver of sense only because the backlight’s default setting is way too bright for comfortable use in a dark room. However, turning brightness down is a better way for you to go than using the “reader” presets.

The Chromebase can double as a Windows monitor because of its HDMI-in port, so we tested quality with our usual Windows-only calibration tool.

We were pleased to find that even at default settings, the display can manage 96 percent of the sRGB gamut, and 71 percent of AdobeRGB. Maximum contrast came in at a respectable 530:1, and we measured brightness of up to 226 lux. That is a very solid score in light of the AIO’s anti-glare screen.

The LG Chromebase is one of the least expensive all-in-ones out there.

Even color accuracy proved to be solid. The Chromebase averages a DeltaE of about 3.39. The lowest value that’s generally visible to the human eye is a DeltaE of 1, which isn’t bad for a budget AIO. A nearly perfect 2.2 gamma curve rounded out the LG’s strong performance.

To be clear, a stand-alone budget monitor can do better. The Samsung D390H, for example, offers higher contrast and better color accuracy a lower price. The same can be said of the Acer K272HUL. However, the Chromebase is not just a monitor. It’s a fully functional all-in-one that can also be used as a monitor. Most users won’t buy it just to use it as a Windows display, but it can serve in this capacity very well if you ask it to do so.

Though out-of-the-box image quality proved adequate, we wanted to see if we could push the Chromebase’s display further through calibration.

Most aspects of the screen’s performance didn’t improve, but we did manage a measurable improvement in color accuracy, which dropped from an average DeltaE of 3.39 to 1.55. There was a general increase in accuracy across the entire gamut, which expanded to 99 percent of sRGB, and 73 percent of AdobeRGB.

The post-calibration difference in image quality was difficult to notice when staring at the desktop, but it was easy to notice when watching high-definition movies. At its default settings, movies on the LG Chromebase, like many other LED back-lit displays, look too cool and clinical. Images can be sapped of warmth, and actors can look pale. Calibrating the image eliminated this problem.

We also noticed a small boost to shadow detail. By default, the monitor is set to its maximum brightness which, in turn, obscures dark images. Our calibration targets a brightness of 120 lux, which helps preserve the quality of dimly lit scenes.

Most of these improvements disappear when the system is switched to Chrome OS, however, and there’s no precise calibration tool available for Google’s desktop operating system. Any calibrations made via the display controls will stick, but any made in software won’t, leaving users with images that look similar to the pre-calibration settings.

Audio is a weak point

While the display is good given the price, the speakers bring down the LG’s hopes of becoming a cheap, stand-alone entertainment center. Quality is not the problem, though more bass is needed. Volume is the real issue. The Chromebase is barely loud enough to fill a tiny office with sound, even with the speakers at full blast. A pair of external speakers or a set of headphones will be needed for real audio enjoyment.

The LG Chromebase ships with an Intel Celeron 2955U dual-core CPU clocked at 1.4 GHz, and 2GB of DDR3 RAM. These specifications aren’t record-breaking, of course, but they don’t need to be. Chrome OS is a lightweight operating system and, RAM aside, this hardware would be adequate even in a Windows machine.

YouTube videos play smoothly at 1080p, and browsing with 10 tabs open had no impact on performance. The only apps that might pose problems are games.

Our test suite is not designed for Chrome OS, so we relied on real-world use to see how the Chromebase stacks up on the performance front.

We found little to complain about. YouTube videos play smoothly at 1080p, and browsing with 10 tabs open had no impact on performance. The only apps that might pose problems are games.
2D titles aren’t an issue, but 3D games are a different story. The Intel integrated graphics chip, combined with the relative inefficiency of browser-based games, creates a perfect storm for stuttering. We experienced noticeable issues in games like From Dust and DarkOrbit. These games are playable on the Chromebase, but poor frame-rates make them difficult to enjoy.

With the Chromebase, you only get a 16GB SSD. That’s not much, and that’s usually par for the course as far as Chrome OS-based systems go. However, at least that’s supplemented by 100GB of free Google Drive cloud storage for two years, and very few apps take up more than 100MB of space. Plus, going with an SSD as opposed to a larger mechanical hard drive means lightning-quick website and app loads for you.

Most all in ones come with a keyboard and mouse. After all, the term “all in one” implies that a complete package is included. Still, it’s impressive that LG has managed to ship this $349 system with a decent pair of peripherals.

Both the mouse and keyboard are wired, which increases desktop clutter, but they perform their jobs perfectly. Since this is a Chrome OS-based computer, the keyboard offers a variety of unique shortcuts in place of the standard F-key row found on Windows keyboards.

When it comes to Chrome OS, some of us are extremely bullish about it, while others haven’t a clue why anyone would willingly use it. There have been no major overhauls since these opinions were penned, so they’re a good read for anyone who is on the fence about whether to go with a system powered by Google’s desktop operating system.

If you lack the time to read two long articles, however, here’s Chrome OS in a nutshell.

Chrome OS is a browser-based operating system that relies on Web applications for most of its functionality. No apps from Windows or any other operating system will function on this PC. Plus, Chrome OS systems aren’t set up for dual-booting.

In exchange for this downside, you receive better hardware for your money. Chrome OS is open source, and free for manufacturers to use. The system feels quicker than similarly-priced rivals, and there’s less of a need to worry about security than with Windows, or even Android.

In short, it’s all about low cost and simplicity. You can’t do as much with Chrome OS as you can with Windows, but if your needs are restricted to simple Web-based tasks, then a Chrome OS desktop or laptop might be a good fit for you.

The LG Chromebase is one of the least expensive all-in-ones out there. There are two others in its price range that rival it; the Asus ET2031IUK-01, and the Acer Aspire AZC-606-UR24. Both run Windows, but both also have 19.5-inch displays running at 1600×900, rather than the 21.5-inch 1080p screen that the Chromebase wears.

These competitors also lack HDMI-in, so they can’t be used as external monitors. Ironically, the Chromebase also bests the specifications and prices of several Android all-in-one desktops, which are far inferior in almost every respect.

That leaves one question – can you live with Chrome OS? Not everyone will answer yes, and readers should give the question significant thought before buying. If you can though, grab an LG Chromebase and never look back. It’s a major upgrade over similarly priced Windows systems, provided that your computing needs are restricted to Internet-centric tasks.