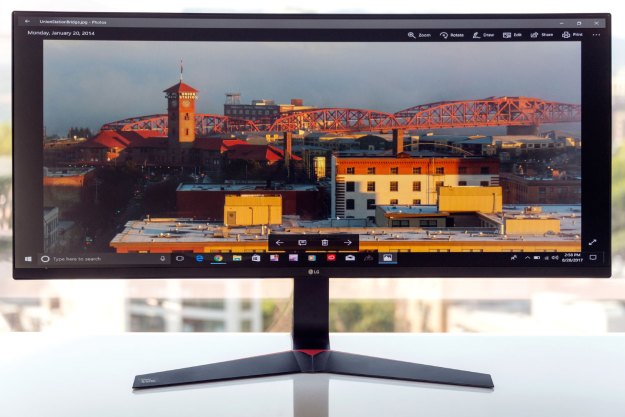 “LG’s 34UC89G is a beautiful high-refresh monitor, but compromises on resolution.”

LG has long produced monitors fit for gaming without slapping any of that obnoxious style on them. High refresh rates, adaptive refresh tech, and quick response times are par for the course in LG’s screens, rather than features reserved for displays with gaming slapped in front of them. It’s a path that has worked well for the brand in the past, but as our LG 34UC89G review demonstrates, making that final step into gaming is risky.

That’s because the LG 34UC89G stretches a 2,560 x 1,080 resolution to its very limit to fit onto a 34-inch ultrawide panel with a 21:9 aspect ratio. It compensates with Nvidia G-Sync for adaptive refresh, 144Hz maximum refresh rate, with up to 166Hz on overclock, and just a five-millisecond response time.

The decidedly gamer-focused model is available for $900, a high price point for a 1080p screen, even one tricked out with a modern feature set.

Black and red and hardcore all over

The LG 34UC89G’s design draws heavily from its home and office counterparts, except for a new coat of paint. Where most LG displays reach for a greyish-silver color, this screen is decked out in a combination of matte and high-gloss black, with touches of red. This change of pace feels about four years too late, as the gaming community has largely grown tired of the now-cliché red and black color scheme.

The other problem is that this new color palette leaves more plastic than metal exposed, and this includes the stand. Though it does its job well enough, we did notice a lot of twist in the neck of the stand when the monitor was directly bumped or jostle. It won’t break break, but we do think it’s disappointing to see on a $900 monitor.

At least the stand offers ergonomic options. It can adjust for height and tilt, which puts it on par with other high-end ultrawide monitors. VESA mounting is supported, too, so you can replace the stand with another option if you’d like.

Ultrawide displays have no shortage of real estate for ports, which makes the LG 34UC89G’s somewhat limited selection a bit of a disappointment. The inputs include just one DisplayPort, one HDMI input, 3.5mm audio out, and a 2-port USB 3.0 hub. Most other ultrawide screen packs in more ports, including LG’s own competing 3,440 x 1,440 screen, which has Type-C. Even a bump to four ports on the USB hub would’ve made the screen more competitive.

Even the menus are red and black

The on-screen controls are managed through a nub directly under the center of the screen, which moves in four directions and clicks in, like a button. It’s a common control scheme, particularly for ultrawide screens. LG’s implementation is responsive, where touch sensitive buttons with poor reaction times have become the norm.

The stand can adjust for height and tilt, which puts it on par with other high-end ultrawide monitors.

Fitting with the gaming theme, the menus have been painted with the familiar red-and-black gamer brush, with some extra jagged edges and glitch patterns to really drive home the point. The main menu features a row of large status indicators with information about the current input, resolution, and refresh rate at a glance.

Dig deeper into the menus, and you’ll find a wider selection of options and preset modes for the screen. There are game modes for FPS and RTS titles, which affect a variety of options from response time to gamma. Under the game adjust menu, you’ll find overclocking, which can push the refresh rate from 144Hz to 166Hz. There’s also an on-screen crosshair feature, so you can cheat in games that don’t offer it by default.

For more typical screen options, the picture adjustment sub-menu has sliders for brightness and contrast, gamma, and color temperature, although only in terms of “warm” or “cool” rather than by Kelvin. There are also individual RGB sliders for fine-tuning the color palette. Finally, a general tab catches settings like language, power LED behavior, standby times, and quick charge settings.

All in all, the menus are solid for a gaming display. LG provides more options than we’re used to seeing, and navigating between them wasn’t a chore.

How does it look?

In addition to our subjective impressions from our time with the screen, we used Datacolor’s Spyder5Elite to measure the screen’s objective qualities. It gives us a chance to evaluate the screen on a level playing field, with other screens that aren’t in the office anymore.

On paper, the LG 34UC89G scored some important wins. Its 920:1 contrast ratio is a strong score for the category, and only falls short of the Acer Z35, a screen in a very similar position to the LG. We also measured a 330-nits maximum brightness, where we generally consider anything over 300 to be a strong enough score for a desktop display. The LG scored a 2.3 for gamma, which is just slightly higher than the ideal 2.2, so images may appear a little on the dark side out of the box.

The LG’s color gamut was a similar story, covering 100 percent of the sRGB spectrum and 80 percent of the AdobeRGB spectrum. Most high-end panels fall right in the same range, particularly ultrawide screens, as there are only a limited number of manufactures building curved 21:9 panels – and LG is one of them.

LG’s menus have more options than we’re used to seeing, and navigating between them wasn’t a chore.

The LG also did well in color accuracy, although it didn’t beat competitors by a wide margin. Its score fell at 1.94, while the Acer Z35 and Samsung CF791 sitting closer to 2.5. A lower score is better for color accuracy, and anything under one is generally considered undetectable by the human eye, an honor only the LG’s higher-resolution 34UC98 can claim in this category.

Subjectively, the deep contrast and sharp color reproduction are definitely strong suits for the screen. That means games and movies look full and life-like.

There is a problem, however. The resolution. Stretching 2,560 x 1,080 across 34 inches, the LG 34UC89G crams just 82 pixels into each inch, a good deal behind the 110 PPI offered on the 3,440 x 1,440 options of the same size. As with the Acer Z35 – another big-screen, low-resolution display – sharpness can be a concern. Games that rely on many fine elements (like online role-playing games) can appear lackluster, as the resolution results in chunky text and interface art.

To be fair, the LG 34UC89G’s resolution is intended. This monitor is built around its very high refresh rate. That means your computer needs to be putting out frames quickly – preferably, at 144 frames per second – to see the full benefit. Very few PCs can do that at 3,440 x 1,440 resolution, so 2,560 x 1,080 is a necessary compromise.

Here’s the thing, though. We’re not convinced a high refresh rate is better than a sharp picture. Samsung’s CF791 refreshes at a less impressive 100Hz, but it looks incredible. Ideally, we’d like to have both the refresh rate and image quality but, forced to choose, we have to pick the latter. Not everyone will agree with that, though, and we know that. The LG 34UC89G will look attractive if you prefer the opposite.

The Spyder5Elite doesn’t just read the screen’s potential performance, it can also help knock it into shape. In this case, calibration was able to push the already solid gamma and color accuracy readings closer to perfection. Gamma settled into an ideal 2.2 score, from 2.3 before calibration. Color accuracy dropped from 1.94 to 1.28, as well, which is a fairly sizable improvement.

LG covers the 34UC89G for one year of manufacturer defects, a paltry offering compared to other high-end screens, almost all of which feature three year warranties. This continues to be a thorn in LG’s side, and we’d like to see the company respond by improving its warranty terms.

LG’s ambitious 34UC89G is certainly a step in the right direction for ultrawide monitors. High refresh rate screens are just starting to make their way to the aspect ratio, and this initial effort by LG shows how much smooth gameplay can facilitate immersion. At $900, however, it competes with some of the best ultrawide monitors around, including LG’s own offerings.

$900 is a lot to spend on a monitor, and there are lots of competing options. Samsung’s CF791 is a solid alternative for $50 less that’s sporting a 100Hz refresh rate, 3,440 x 1,440 resolution, and AMD FreeSync, for those on team Radeon. It even features quantum dots, which allows for a wide color gamut.

We see buying a monitor as an investment, and the right screen can stick with you for years, across several systems. The LG’s refresh rate is high, but its resolution is low in a world of increasingly high-resolution media. More streaming services and games are supporting 1440p and 4K resolution, and spending $900 on a monitor that’s only 1080p is a tough call in 2017.

No. While LG’s gaming-oriented 34UC89G checks off a lot of boxes for solid contrast, brightness, and color accuracy, the screen’s comparatively low resolution is a real turn-off. By bringing 144Hz and higher refresh rates to the ultrawide platform, the LG 34UC89G should excite us, but there are just too many problems to ignore. The resolution is far too low for the size, the connectivity and warranty are limited, and at $850, the Samsung CF791 offers a much better value.

Best gaming monitor deals for May 2022

What to look for in a gaming monitor