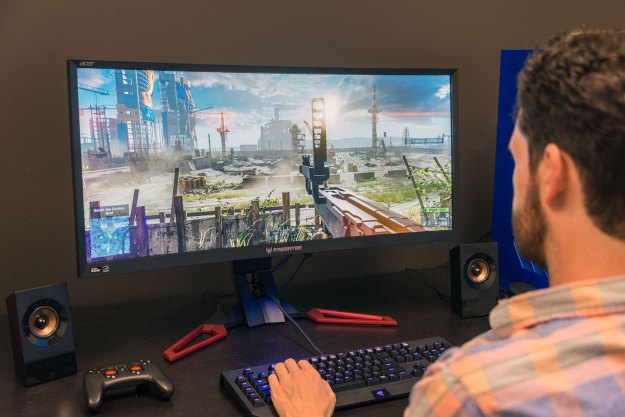 “Acer’s Z35 is the fastest widescreen monitor around.”

Over the past year we’ve gone from being skeptical of ultrawide monitors (and the high price they used to carry) to singing their praises. As prices have dropped and resolutions have shot up, the immersive, curved panels have become a better option, despite a growing selection of 4K monitors.

There are a few reasons for that. Movies looks great on these displays, filling the screen naturally. It’s perfect for gaming, where the extra real estate means increased field of view and more room for UI elements and options. Even work is better, as there’s room to open three or four windows side-by-side.

The Acer’s gaming lineage is immediately obvious. The thick, black bezels are offset by red, brushed metal accents, with a big Predator logo slapped across the front. There’s even an hidden light up front that softly glows, in case you want it lit up like a car from Need for Speed.

While it looks the part, it doesn’t quite feel that way. The curved back panels bend easily, and the screen wobbles around with heavy typing or desk movements. The stand also doesn’t move at all, which is even more of a headache with an ultrawide than with standard width monitors.

It’s worth noting that the Predator is big. Really big. However big you think it is – it’s bigger. With a humongus wingspan and wide, heavy stand, it’s tough to move around, and might even require some extra desk space. Its curve is basically the same as we’ve seen on every other ultrawide curved screen, but the sheer size of the monitor makes it look more dramatic.

All of the ports on the Z35 are on the rear and face downward. They sit about three inches from the bottom of the monitor, behind a shroud. This makes them tricky to connect, especially considering the screen doesn’t pivot or tilt. Just leaning back isn’t quite enough to see the ports without getting underneath the monitor like a mechanic working on a car.

Once you’re down there, you won’t find much outside of the standard selection of ports. There’s a DC power plug with its own separate brick, plus HDMI, DisplayPort, and 3.5mm audio out. Like a lot of gaming monitors, there’s also an upstream USB port with a four-port hub.

There’s nothing to complain about here. Other monitors may have started adopting Thunderbolt 3, or adding in a second DisplayPort, but Acer includes enough ports for most users.

A wealth of options

Acer’s decision to go with physical buttons is a welcome change. They’re much easier to use buttons, especially in the dark, than the touch-sensitive buttons that have become more common. On the other hand, the menu options are vague unless you’re familiar with Acer’s unique logos, which adds a learning curve to navigating the on screen display.

While learning to navigate the on-screen display settings might take some work, they certainly offer a respectable array of changeable options. There are brightness, contrast, and adaptive contrast sliders, as well as Acer’s eColor presets, and blue light and dark room filters in the picture menu. More specific color settings allow for gamma adjustment between 1.8 and 2.2 (both of which test a little lower than their listed value) plus color temperature presets, sRGB mode, and 6-axis manual color correction.

The Acer’s wealth of options include some targeted specifically at gamers. The monitor can draw an aim point in the center of the screen to act as a crosshair for games that have none. Ultra-Low Motion Blur, which uses the backlight to help smooth out motion blur, is also available, but you’ll have to turn off G-Sync to enable it. The overclocking switch allows you to push the monitor’s refresh rate from 144Hz to 200Hz easily, although that boost isn’t as noticeable as 75 to 144Hz.

Getting down to brass tacks, the Z35 is a 35-inch Vertical Alignment panel, with a 144Hz refresh rate, and a four millisecond respond time. We usually see 34-inch panels with 3,440 x 1,440 resolution, for about 110 pixels per inch. The Acer, on the other hand, sports 2,560 x 1,080 pixels on a 35-inch panel, resulting in just 80 pixels per inch. That very low result is likely to be an issue, but we’ll check out the other aspects of the screen first to see.

As it turns out, the Z35 scores high marks, especially compared to other ultrawide monitors. Its maximum brightness of 396.4 lux is one of the best we’ve yet to measure – only a handful of screens break 400 lux. Black levels reach a satisfying flat zero with the brightness down, an achievement none of the other 21:9 screens we’ve tested can claim.

Best of all, the Acer hits a contrast ratio of 1190:1 at maximum brightness. Once again, only the absolute best displays break 1000:1 when it comes to tested contrast, both the Dell U3415W and Samsung SE790C ultrawides fall in the mid-700s. Its color gamut is respectable, filling out a complete 100 percent of the sRGB spectrum, and 79 percent of the AdobeRGB spectrum, about on par with the LG 34UC97.

This monitor will make your desk to look like a car from Need for Speed.

Only two areas fall short of our standards for computer monitors. Gamma is slightly off at 2.0 instead of an ideal 2.2, an issue the Dell and Samsung share, which causes some images to appear washed out. Color accuracy is 2.45, which is slightly high from the ideal value of one (lower is better), but still not awful. The biggest difference was in greyscale, which proper gamma settings could fix.

Despite all these benefits, the screen’s low resolution remained an issue. It stands in the way of the victories the Predator can claim in contrast, black levels, and brightness. The pixels are easily visible on the desktop, in games, and even in higher-resolution media content. Calibration might be able to help with gamma and color accuracy, but they won’t solve the resolution issue.

Calibrating the display with our Datacolor Spyder4Elite was a mixed bag. Color accuracy moved to 1.39, beating every other ultrawide except LG’s 34UC98, which scored a phenomenal 0.95. Gamma moved even further off target to a measured 1.9, although the subjective look of the screen and improved overall.

Calibration doesn’t typically affect brightness or black levels, but we did notice a slight bump to the Acer’s contrast. It’s already one of the strongest ratings we’ve seen from any monitors, let alone ultrawides, so it doesn’t make much of a difference in real-world perception.

Adjusting the gamma and color accuracy certainly helped with the washed out look we were seeing initially. Resolution remained an issue, however. Calibration can’t create extra pixels.

Acer provides a three year parts and labor warranty with the Predator Z35, which is standard for high-end monitors.

The Predator has speed on its side. Games look buttery smooth as they approach 200 frames per second, and it’s not hard to see why Acer thought a huge, high-refresh monitor would be a good idea. The panel and processing are top-notch as well, allowing gamers without a calibration tool to enjoy the monitor’s best traits. Those traits stand out among other ultrawide displays.

The $1,000 you’ll spend on the Acer Predator Z35 can snag you any of the best 3,440 x 1,440 ultrawide screens. None of them have refresh rates or high benchmark scores like the Acer does, but there are options with FreeSync if gaming is the goal. With the Dell Ultrasharp U3415W nearing $600, you could buy it and a GPU upgrade for the same price as the blazing fast Acer. Samsung’s SE790C, another excellent choice, is sold for $800 – undercutting Acer by $200.

To be fair, neither of those strictly target gaming. They each have a maximum refresh rate of 60Hz, which means they won’t offer the lightning-quick gameplay of the Z35’s 200Hz refresh rate. But while the Acer’s refresh rate is outstanding, it’s balanced by most pixelated picture in its category, a trait that hurts gaming just as much as the refresh rate helps.

You may still pick this monitor if you’re a hardcore gamer obsessive about refresh rates. Most, though, will prefer the better value of more balanced competitors.