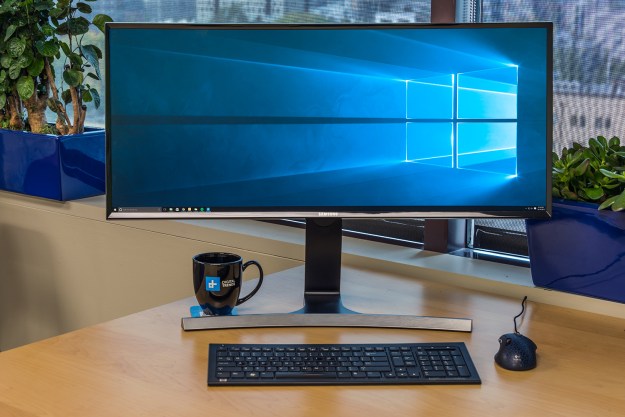 “Once you lay eyes on Samsung’s ultra-wide curved display, you’ll wonder how you were ever satisfied with a flat screen.”

Computer monitors can be a little boring. It’s nobody’s fault — it’s just not a market with a lot of room for creativity. Sometimes, though, a monitor debuts that can draw attention simply by sitting on your desk. The SE790C is part of that rare breed.

The most striking feature of the SE790C is its enormously wide 21:9 aspect ratio. The 34-inch curved panel is wide enough to dominate all but the largest desks, with a resolution of 3,440 x 1,440. The panel also boasts a 60Hz refresh rate and a response time of around four milliseconds.

But high-end performance and an ultra-wide display don’t come cheap. The SE790C retails for $999, but is readily available for an even $900. That puts it in the same range as LG’s 34UC97-S and Dell’s U3415W, as all three are available at the same price. Since this monitor is headed for enthusiast gamer or media professional desks, it needs to prove itself against the other two. Can it beat out the very similar competition?

If there’s one thing you can immediately say about the Samsung SE790C, it’s that it looks really nice. A thin, glossy black bezel surrounds the display on all four sides, with a single post that extends from the center of the screen down to a wide stand. Even in the Digital Trends office, where our desks are a parade of high-end review monitors, people stop to bask in the Samsung’s glory.

Despite the oversized stand, the monitor’s extreme width causes it to wobble a bit if you move your desk or hit your keyboard particularly hard. That’s not an uncommon problem for large monitors, especially for ultra-wides, but it can be a little annoying. The stand doesn’t swivel, which isn’t a big deal once you have it set up, but it does make plugging bits into the USB ports a bit awkward.

There are no obvious panel gaps where there shouldn’t be, and the construction feels sturdy, wobble as it might under the heft of the panel. It’s a display that looks just as at home in a gaming nook as it does on a professional’s desk, and it has the connections to match.

For video, the SE790C has one DisplayPort and a pair of HDMI inputs, but the fun doesn’t stop there. There’s also a USB hub connector for the four port USB hub, and 3.5mm headphone out. That’s a wealth of connections, more than most displays offer, but right in line with the alternatives from LG and Dell.

Controls on the display are a bit finicky, utilizing the same jog button design that’s found on a lot of Samsung TVs and monitors. Rather than separate buttons, the controls consist of a single button that can move in four directions, as well as click.

People in our office stopped to bask in the Samsung’s glory.

The first press brings up a menu with four options – one for each direction. Apart from the source selection and power, one button allows you to enable the picture-by-picture feature. Dig into the final direction, the main menu, and you’ll find a wealth of options.

For picture settings, you can adjust the brightness, contrast, sharpness, and turn off a few features like game mode and Samsung Magic Bright, as well as adjust color and response time. Under screen, you can change the image size and adjust PIP settings. Options lets you change the language and display time, as well as transparency for the on-screen menu, and Settings lets you adjust power and diagnostic settings. You won’t fine detailed gamma adjustment – a few presets are the only option.

Right out of the box, the SE790C already boasts a well-tuned configuration. The screen is capable of 99 percent of the sRGB spectrum, and 76 percent of the AdobeRGB spectrum. The brightness is a fairly mid-range 288 nit, which is more than enough to be seen in a brightly lit office, but falls short of some of the other high-end monitors we’ve tested.

Even before calibration, gaming and media on the SE790C are both phenomenal. Colors are a little muted, but blacks are deep and dark in a way that’s really satisfying to watch. The curved screen makes landscape photos and sweeping video feel much more immersive. Contrast and black levels are a good, but not great 740:1 at full brightness, at least pre-configuration, and the deepest blacks still have a little shine to them. A gamma of 2.0 instead of 2.2 isn’t ideal, but it’s not entirely noticeable when you’re sitting in front of the display.

Gaming on the ultra-wide resolution in particular makes you never want to go back to a standard aspect ratio. If you can bump the field of view in a game, you’ll see an even bigger increase in effective screen space, a boon for serious gamers and a cool effect even for those already hardened by 4K gaming.

A little tuning goes a long way on the SE790C. After a quick calibration, the sRGB and AdobeRGB are both a percentage point higher, for a full 100 percent of the former and 77 percent of the latter. That’s a rating short of the highest-end, but still a respectable measurement. Brightness falls a bit to 270, but it’s much more comfortable on your eyes.

Ultra-wide gaming makes you never want to go back to a standard aspect ratio.

Calibration also brings all of the just-barely-off numbers into line with what we like to see from a display. Black level with the brightness all the way down drops from .07 to a flat zero, meaning all the brightness is out of it at calibrated levels. Color accuracy saw an impressive jump from 2.44 to 1.19, with the human eye being unable to distinguish a difference of less than one.

Outside of measurements and benchmarks, the tuning improves the experience of using the monitor drastically. Colors are much warmer and fuller, blacks are truly deep and dark, and the immersive curve of the screen is that much more effective as a result.

Samsung offers a three-year standard warranty on all of its monitors that are 17 inches in size or greater. That’s a fairly long warranty, but it doesn’t cover accidental damage, only defective products. You’ll also have to pay to ship it to a service center.

Samsung 850 EVO 250GB SSD ($85)
If you’re still using a mechanical drive, you’d be surprised how much an SSD can improve performance.

Razer BlackWidow Chroma Clicky Keyboard ($166.88)
You may as well round out your slick new setup with a colorful mechanical gaming keyboard.

HyperX Cloud II Gaming Headset ($100)
Keep in touch with your teammates, or enjoy a movie, without disturbing anyone.

Samsung’s SE790C is a luxurious yacht of a monitor. From the ultra-wide 1440p resolution, to the modest curve in its display, to its near flawless benchmarks, there’s little, if anything, to find wrong with it. The four millisecond response time isn’t ideal for high-end gaming, but it’s not enough to rule it out for anyone except those who play professional Counter Strike.

With all that in mind, it’s worth noting that the SE970C is very much a purchase for those with deep pockets. At one dollar short of a thousand, it’s hard to imagine anyone buying this screen without spending at least that much on a gaming or media rig first. It’s definitely not overpriced for its category, however, and if you’re hoping for a 34 inch, 3,440 x 1,440 curved ultra-wide, plan on spending at least $900.

LG’s offering, the 34UC97, offers similar specs at a similar price, but in practice falls quite a bit behind the Samsung. The brightness is much lower out of the box, at just 200 nit, and while it can render two percent more of the AdobeRGB spectrum, the contrast and color difference leave something to be desired. The Dell is a more substantial alternative, but the gamma was off even after calibration, and color difference was even further off than the LG.

So, if you’ve caught the ultra-wide bug, this is easily one of the best options out there. The form factor lets you stack windows sideways comfortably, enjoy movies in stunning 21:9, and expand the horizons of every game in your library. The expansive 34-inch size only helps further the effects, stretching to take up as much of your desk as possible. Although there are many like it, the Samsung SE790C offers performance and color accuracy that push the category forward, and if you’re willing to spend, it’s worth a look.