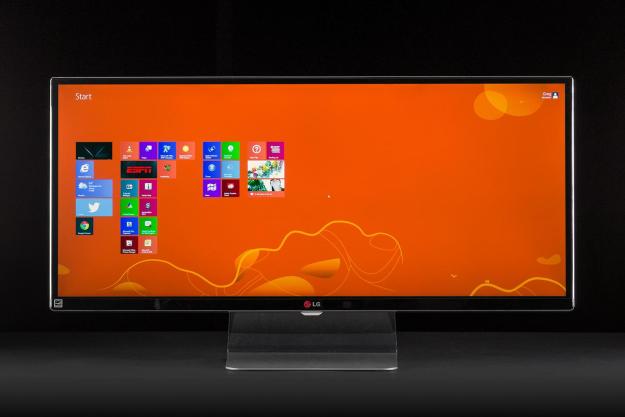 “The LG 34UM95 makes a powerful first impression, but its average image quality and $899 MSRP make it difficult to recommend.”

About a decade ago, a revolution called 16:9 hit the monitor market. Inspired by new HDTVs with the same aspect ratio, 16:9 monitors slowly but surely overtook their 4:3 brethren, despite protests from a few productivity-obsessed geeks. Now, the 21:9 form factor, which was inspired by the aspect ratio at which Hollywood films are recorded, seeks to repeat history by making the average home monitor broader.

Sit down in front of it and you’ll feel like you’re at the helm of the U.S.S. Enterprise.

LG has become the unofficial torch-carrier of 21:9 in the consumer market. The company has released 21:9 monitors in the past, like the 29EA93 and LN450W, both of which we reviewed. Now, they have an even bigger flagship; the 34UM95, which measures an astounding 34 inches diagonally.

The 34UM95 also packs IPS panel technology along with a sleek, modern design that’s intended to make it fit right in with even the most luxurious office environments. This makes sense, given its lofty $899 MSRP. So does new LG’s 21:9 monitor close the gap between itself and the best 16:9 competitors?

The 34UM95’s width is impossible to ignore. The 21:9 form factor and 34-inch screen team up to make a monitor that’s just three inches short of three feet wide. Even the largest desk will be enveloped by the 34UM95, and sitting down in front of it feels like you’re at the helm of the U.S.S. Enterprise. The experience is undeniably futuristic, and initially impressive.

Thankfully, the monitor holds up under closer inspection, for the most part. LG outfitted it with an edge-to-edge matte panel, and hidden bezels that are just a half-inch wide on all but one side. On the bottom, the bezel is about three-quarters of an inch wide. This creates a convincing illusion of a true edge-to-edge panel, though a second glance reveals that a bezel does indeed exist.

Chrome trim accents serve as the transition point between the display panel, and the broad, gray plastic back. We’d like to see metallic accents at this price point, which is a luxury that Samsung sometimes offers. However, the plastics feel sturdy enough.

A simple stand made of metal and acrylic holds the monitor firmly in place, and provides a modest illusion of a “floating monitor” when viewed from certain angles. The stand permits virtually no display wobble, and offers tilt adjustment, but otherwise lacks ergonomic features. A VESA mount is included, so the monitor can be attached to a more versatile third-party stand.

Connectivity comes in the form of two HDMI ports, along with DisplayPort and Thunderbolt connections. There are also three USB ports, but all of them are located on the rear A/V panel, which makes them difficult to reach. A headphone jack is also included, but it too is inconveniently placed on the monitor’s rear panel.

Searching for the 34UM95’s power button is futile; there isn’t one. Instead, the monitor has a clickable joystick that’s used to access all of its features.

We were initially a bit put off by this approach but, once we adjusted, it was extremely useful. Transitioning between menus is quicker and easier than it is with a button-based interface.

There’s a fair degree of adjustability, as well. Picture controls include not only the typical brightness and contrast settings, but also sharpness, response times, black levels, and gamma. Detailed color adjustments are provided too, and include not just red, blue and green, but also cyan, magenta and yellow.

LG also packs a picture split mode in the monitor’s firmware. When enabled, the monitor can be split down the middle between two display inputs, replicating a dual-monitor setup. A software suite provided with the 34UM95 enables the same arrangement, but is used to dice windows rather than inputs.

Our first look at the LG 34UM95’s image quality left us with mixed feelings. The extremely wide view packs a punch, particularly in visually impressive games like Titanfall, but there are downsides as well.

Blacks appear dark gray in many situations, which results in poor contrast, and a lack of perceived depth. Colors look over-boosted at times, and they’re somewhat skewed towards green, which imposes a sickly appearance on actors with light skin.

Objective tests using our Spyder4Elite calibration tool proved that our observations were legitimate. We recorded a maximum contrast level of 560:1, and an average color DeltaE of 3.95. A DeltaE of 1 is considered to be the lowest that’s noticeable by the human eye. This means that the 34UM95’s inaccuracies are quite noticeable, particularly when it’s parked next to a more accurate monitor. We also noted a gamma reading of 1.8, which is way off the ideal of 2.2. Color gamut spanned a merely adequate 78 percent of Adobe RGB.

Another oddity arose in the monitor’s brightness settings. Even at “0” brightness, the display generated 155 lux, which is more than what we like to see from a monitor used in a dark room. Turning the display up to 100 percent only increased brightness to 266 lux, which is a very narrow range. At least uniformity proved to be solid, as we saw a maximum difference of 7 percent off center in the upper left-hand corner.

We find these lackluster results doubly disappointing because they’re a bit worse than the LG LN450W that we reviewed late last year. That 21:9 monitor could handle 81 percent of Adobe RGB, had a much better gamma curve of 2.3, and an average color error of just 2.58. It was also twice as bright at maximum, but dimmer at minimum. The LG 34UM95’s only advantage is resolution; it runs at 3440×1400, instead of the LN450W’s 2560×1080.

LG includes a True Color Balance tool as part of its software suite. The tool detected our Spyder4Elite sensor without issue, so we decided to use it as part of the calibration process. This includes an adjustment of gray balance, white point, and brightness.

We targeted a white point of 6,500k, a gamma curve of 2.2, and set the brightness target to 120 lux (as far as we know, the True Color Balance tool is the only way to lower brightness below 155 lux). The tool was seamless, and required only a few clicks to get started. Even users with limited monitor calibration knowledge should have little trouble with it.

Calibration significantly improved image quality in some areas. We measured gamma at 2.3, which is a huge improvement from 1.8, and the Adobe RGB gamut improved from 78 percent to 79 percent. Average color error decreased to a DeltaE of 2.58, and we managed to reach our ideal dark-room brightness of 120 lux. This in turn improved black level performance, though contrast actually dipped to 500:1 because of dimmer whites.

These are still tepid results, however. Most of the monitors that we’ve tested recently have scored better, and that doesn’t just apply to LG’s own LN450W. The Acer K272HUL, which is a less expensive, more conventional 16:9 display, also fared better. It wasn’t calibrated with the help of a vendor-provided tool either.

The new LG 34UM95 is priced like a flagship, but our tests show that performance doesn’t measure up with the MSRP. Aside from resolution, this display comes up short of its predecessor in every other area, as well as less expensive 16:9 displays. The 34UM95 is priced to compete with the best 27-inch 16:9 monitors from Dell and ASUS, but it simply can’t hang with that crowd.

That’s a shame, because the monitor is otherwise exceptional. Build quality is very high, the wide-format, thin-bezel panel looks futuristic, and connectivity options are plentiful. Ultimately though, none of this matters, since the display itself leaves something to be desired.

There’s really just one reason to buy the 34UM95; if you have a love for the 21:9 form factor. The size of this particular display means that, despite its width, its height is almost identical to a 27-inch 16:9 monitor. You’re not losing vertical space, but instead gaining horizontal space, which at least makes the 34UM95 a versatile choice for media and productivity.