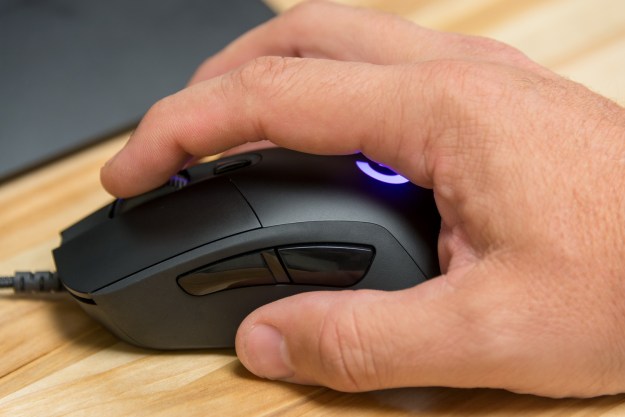 “The Logitech G403 is a solid all-around gaming mouse, if you can handle some sticker shock.”

The G403 is a part of the new Prodigy line from Logitech, reportedly engineered to make high-end gaming gear more approachable. By reducing the number of buttons and evoking a classic design, the venerable peripheral company hopes to attract the elusive casual crowd without sacrificing their hardcore gaming pedigree. The G403 is the centerpiece of this outreach effort, but can Logitech reach such a broad audience with a single product line?

Gaming mice are often defined by their exotic shapes, but the Prodigy line takes things back to basics. Logitech employs a classic design for the G403 that feels natural and familiar, with a slightly tapered grip where your thumb and ring finger rest on the mouse, it glides across most surfaces with ease. It’s a stark contrast against other popular gaming mice like the Razer Naga, which boasts 12 buttons and a more unconventional shape. It’s utilitarian but not very approachable, and feels a bit wide in the hand.

The Logitech G403 just barely flirts with ‘gaming gear’ conventions by jazzing up its matte black finish with RGB LEDs under the G logo and the scroll wheel. Both of which are programmable via the Logitech Gaming Software, but we’ll come back to that. It’s understated and stylish without being ostentatious – you could use this thing in the office and nobody would bat an eye.

The matte finish feels good in your hand, and doesn’t attract fingerprints. The two thumb-side buttons are positioned well, toward the top of the left side, just out of the way enough to avoid accidental clicks and close enough to your thumb that they’re easy to press without reaching.

The two primary buttons, the left and right click, feel sharp and snappy. They’re responsive and produce a satisfying click, they’re also really fast, quick enough for competitive gaming. Logitech is quick to point out that the buttons are the real deal – they’re the same ones used on their Pro line of gaming mice, with custom-tensioned springs and detached plastic that will not warp over time. Compare to the unibody design on most Razer and Roccat mice, where the buttons are part of the plastic shell of the mouse. Over time, the buttons can deform from long-time use.

The overall shape of the G403 was engineered to be familiar, and in that respect it’s a resounding success. It looks familiar, it feels familiar, even if you’ve never used a gaming mouse. Simply put, it’s approachable.

However, it’s worth noting that the mouse has an unpleasant habit of buzzing at you if you tap it against a hard surface like a tabletop. If you pick it up and move it, chances are it’ll buzz at you like it’s full of bees. Rest assured though, we checked and the G403 does not have any bees inside, it’s just probably a side-effect of those custom tensioned springs underneath the right and left buttons.

When it comes to the weight, the G403 was engineered to be light, so we can’t fault it for that but it does have an undeniably ‘plasticky’ feel. It feels very light, and frankly a little cheaper than its price tag would suggest. There’s a slot underneath for an optional weight, but even with the extra 10 grams, the G403 feels insubstantial. It doesn’t really feel like a premium mouse.

Let’s talk about the lights. Ever since gamers started putting LEDs in computer cases, peripheral manufacturers have felt pressure to glam up their mice with a dazzling array of customizable LEDs. The G403’s LEDs are bright, but muted by a soft touch overlay which helps keep them from being too showy. They shift smoothly between the 16.8 million colors available, or you can program them to any color you’d like via the included Logitech Gaming Software. They look nice, if you like blue. The RGB LEDs tend to have a blue hue if you change them to any color that strays too far from red, green, or blue.

The sensor is the really standout feature of the G403. According to Logitech, the sensor sends 1000 reports per second, and it shows. The mouse is silky smooth even on the highest sensitivity settings.

Sensitivity can be controlled with a button just above the mouse wheel. Toggling between three presets, it’s hard to find a perfect ‘Goldilocks’ zone, though. Each one is either too sensitive, or too slow. It’s easy to fix by tuning the sensitivity in your computer’s settings or individually for games, but it would have been nice if the presets were a little more granular.

Speaking of granular presets, let’s talk about Overwolf. The game streaming software is a pretty solid as streaming software goes, and chances are you’ll end up with it on your computer even if you don’t want it. The Logitech Gaming Software is bundled with Overwolf, and it’s not immediately clear how to opt out of installing the additional software. Helpful hint: during installation, take a second and don’t just keep hitting next. Make sure you click “skip” if you don’t like software being snuck into your system.

That said, once you uninstall Overwolf, the Logitech Gaming Software is fully featured. It allows you to custom tune your sensitivity settings, the LEDs, program your buttons, and even save your settings to the G403’s on board memory for gaming on the go.

The wireless variant of the G403 is identical to its wired cousin, sharing the same solid stylish body and slightly oversized price tag. The wireless G403 does have impressive battery life though, which is important since it does not feature removable batteries – it needs to be charged via the included cable.

The G403 ships with a standard two year limited hardware warranty with proof of purchase, protecting your mouse from manufacturer defects that might show up down the line.

The G403 gets itself out of the way, and that’s definitely a good thing. But it retails for $70, with the wireless variant coming in at $100, so let’s break it down point-by-point.

The G403 evokes a classic design that feels natural and familiar.

Yes, even a few from Logitech. If the G403 were a little less expensive, it would stand out as a solid competitor in a crowded field. But as it stands the G403 has some serious competition from, frankly, better mice. Logitech even makes better mice at the same price as the G403, like the G Pro, the pro-level mouse designed for competitive eSports. It even looks similar.

So what’s the difference? Well, the G Pro is available on Amazon at a slightly lower price than the G403, making it an attractive alternative. With all this in mind, it’s hard to recommend the Prodigy over the G Pro, a professional level mouse designed with collaboration from eSports players.

It’s a sturdy little mouse. The rubberized side-panels are firmly affixed to the body, there’s no room for anything to get in around the edges over time, and the material Logitech used reliably repels dirt and oils. Unlike some rubberized side-panels, these are very durable, and even if you tried you’d be hard-pressed to get them to start peeling.

Additionally, the cord on the wired version of the mouse is very robust and flexible. It doesn’t snag or kink, and it’s firmly affixed to the front-side of the mouse. If you do pick up the Logitech G403, you can rest assured that it’s probably going to see you through at least a few generations of PC games.

Only if you can find it on sale, or if you don’t mind shelling out a little extra for a very comfortable mouse. The real problem is the Logitech G403’s price — it’s just not competitive, and there’s some formidable competition in this part of the market.

At their current price points, the Logitech G403 wired and wireless mice are not competing with entry level gaming mice. They’re competing with established, reliable, and dedicated gaming mice — like the Razer Mamba Tournament Edition, or Steelseries Rival 700. If you want a mouse that’s going to give you an edge in online games, why wouldn’t you go with something engineered for online games, rather than something engineered for a crossover audience?

According to the manufacturer, the Prodigy line of gaming products is an attempt to introduce gaming gear to everyday enthusiasts – the kind of customer who might be put off by a mouse with 11 programmable buttons. That same customer though, will undoubtedly be put off by a $70 price tag on a simple, straightforward, wired mouse.