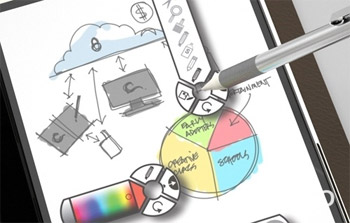 Apple’s late-summer announcements have come and gone with nary a peep about the much-talked-about tablet, but in the meantime, plenty of other companies have been quick to run for their boards and ride the wave of tablet interest that has surged up with the mere rumble of one from Apple.

Toshiba hopped in with the Journe Touch, Archos pushed things a step further with its Archos 9, which will run Windows 7, and now, the Tom to Apple’s Jerry has stepped up with its own. This week, Microsoft laid its cards on the table with the Courier tablet.

Not so much a tablet as a “booklet,” (Microsoft’s own terminology) the Courier folds dual seven-inch inch screens within a book-like factor that completely seals up the screens when closed. Like the iPhone or Zune HD, both screens allow multi-touch gestures like pinching, and also work with a stylus. The only button lies on the inside spine.

Microsoft’s first video of the project shows a demonstrator sliding contacts from one screen to the next, writing notes with the stylus, turning a written to-do list into a typed set of checkboxes, and writing on the virtual backs of photos taken with the tablet as if they were real. The emphasis seems to be on a more natural, intuitive experience, like a computerized version of the marble-cover notebooks you used to use in high school.

So far, Microsoft has only released a handful of details on the tablet, but the company has stated that the version shown is a “late prototype,” which could make it the first next-gen tablet to market, in advance of Apple. More details can be found at Gizmodo, which first broke news of the upcoming tablet.