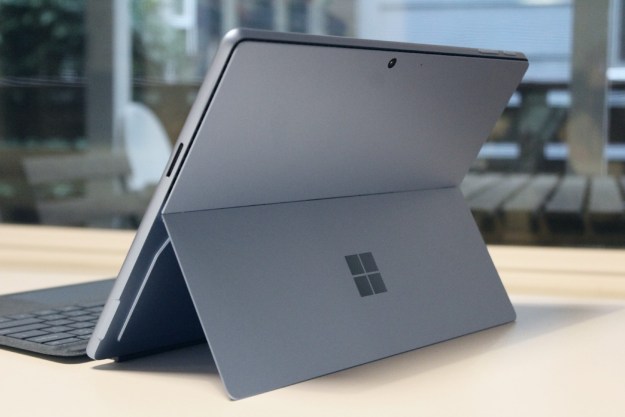 “The Surface Pro 9 ditches its headphone jack, but keeps the fundamentals solid.”

Microsoft really wants Windows on ARM to succeed. For tech heads and early adopters, that’s the real story behind the latest Surface Pro 9.

But regardless of the configuration you choose, the Surface Pro 9 keeps almost everything that made previous iterations of this device such a success. That is, minus a headphone jack. And even though this isn’t a clear step up from the predecessor in terms of raw performance, the Surface Pro 9 remains one of the best 2-in-1s you can buy.

The one piece of good news on configurations? Microsoft doesn’t charge more for the different color options. They are limited to the higher-end configurations though. The base Core i5 model is only available in Platinum, as are all the configurations of the SQ3.

The Surface Pro 9 makes very few changes coming from last year’s model. It’s the same 2-in-1 tablet design we’ve all grown to enjoy, including the built-in kickstand and removable keyboard. It also includes the thinner bezels and improved screen that came to the Surface Pro 8 last year, making for a modern-looking, sleek tablet.

It’s still not as thin or light as an iPad Pro, and may never be. But at 1.94 pounds and 0.37 inches thick, it’s among the most compact form factors you can get the full Windows 11 experience in. Of course, the Type Cover keyboard adds some more heft (and price), and is still an essential piece of the puzzle. The keyboard and touchpad are both fantastic, and I still appreciate the feeling of the Alcantara fabric under my palms.

The Sapphire option is subtle enough to not feel kitschy.

I still wish Microsoft would bundle these in, but the company still sells the Surface Pro 9 as a stand-alone tablet. Even with the advancements in touch controls and availability of some Android apps in Windows 11, you’ll absolutely want to spend the extra $180 on a Signature Type Cover. This keyboard includes the built-in storage (and charging) solution for the Surface Slim Pen 2 – which will also cost you an extra $130.

None of that is new. The colors are, though. Microsoft used to only offer flashier colors in the keyboards, but now you have more options to customize the chassis itself. My unit came in Sapphire, but there’s also a Forest green option as well. These new color options are subtle enough to add a splash of interest to the design without feeling kitschy. I’m down.

The ports are really the only other noticeable change to the Surface Pro’s exterior chassis, and this time around, it’s not good news. Surface Pro 9 lacks a 3.5mm headphone jack, something every other Surface device has included up to this point. Of course, this decision didn’t happen in a vacuum. We’ve seen the Dell XPS 13 and XPS 13 Plus ditch the headphone jack this year, and they won’t be the last.

Still, the lack of a headphone jack in the case will only turn people off. There’s no explanation given by Microsoft for the change, and no discernible reason this had to happen this year. If we’d seen a dramatic reduction in thickness, that’d be one thing. But it really feels like Microsoft cut the headphone jack from the Surface Pro 9 just because it could. Not a great way to curry favor.

My review unit came with the Intel Core i7-1255U, which performed as expected in this device. These U-series chips aren’t Intel’s heavy hitters, in fact, they only have two Performance cores. But for a device of this type, you’ll find this chip to provide plenty of performance, especially if you’re sticking primarily to applications like web browsers, video calls, Office applications, and light photo editing. If you still assume a tablet like this can’t fully replace your laptop, think again.

This isn’t a clean step up from 11th-gen to 12th-gen though. As you can see, single-core performance is down year-over-year. That’s true in both Geekbench 5 and Cinebench R23 — but also shown in the Essentials test in PCMark 10, which tests single-threaded tasks like web browsing, video conferencing, and app start-up time. The Surface Pro 9 is pretty consistently 10% slower than in these tasks. That might not sound like a ton, but it’s pretty unusual that a newer version of a device performs worse than before.

Fortunately, the benefit of Intel’s 12th-gen chips is the extra Efficiency cores — eight in this case. The result is significantly better multi-core performance — up to 28% in Cinebench R23. As a generalization, this means faster performance in applications like the Adobe Creative Suite or Handbrake. But people likely aren’t buying a tablet primarily for those applications, and most of the other laptops you can buy from this generation will provide better sustained performance. That’s true even of the Surface Laptop 5, which is 16% faster at video encoding in Handbrake.

The Surface Pro 9 has a fan, though it tends to keep things fairly cool and quiet at the expense of sustained performance.

Like performance, the generational jump from Surface Pro 8 to Surface Pro 9 isn’t a clear upgrade in every way. The Surface Pro 8 was a solid battery life performer, offering just over eight and a half hours on a single charge with very light usage. The Surface Pro 9 gets around the same amount as last time, keeping it well behind Apple devices like the iPad Pro or MacBook Air.

Again, the SQ3 model should even that out a bit, though I can’t say for sure just yet by how much.

Compared to other thin and light Windows laptops, the Surface Pro 9 lands somewhere in the middle. Both the Dell XPS 13 and Surface Laptop 5 last longer by a couple of hours, while the HP Envy x360 13 and Acer Swift 3 are a couple of hours back. However, I do think people expect tablets to last a bit longer, especially since the portability of the Surface Pro 9 is one of its primary draws.

Choosing between Intel and SQ3

With the two options of Intel and SQ3 side by side, your assumptions about the strengths and weaknesses of these chips probably hold true. The Intel 12th-gen chips are faster, while the ARM-based SQ3 has better battery life. Microsoft admits this itself in its own spec sheets, claiming the SQ3 offers up to four more hours on a single charge — despite using the same 47.7-watt-hour battery.

Why the difference? Well, the SQ3 is the result of Microsoft’s latest collaboration with Qualcomm, built on the Snapdragon 8cx Gen 3. That means it’s a customized chip built for the Surface Pro 9, but it has a lot of the same performance and features as that SoC (system on chip). These ARM-based chips use a simplified instruction set, and are, therefore, much more efficient. If a chip can pull enough performance out of them, as Apple has demonstrated with the M1 and M2, they can be downright revolutionary.

The SQ3, though, isn’t quite that. At least, not yet. Having not tested the chip yet myself, I can’t say for sure, of course. But I’m going to keep my expectations mild. We’ve seen what the 8cx Gen 3 is capable of in the ThinkPad X13s, and while it was certainly the most capable Snapdragon PC chip to come out yet, it’s behind the current generation of Intel processors in single-core performance by as much as 37%. Even compared to the slower Dell XPS 13 (9315), it’s over 20% behind in single-core – more akin to laptops from last year.

I expect the SQ3 to improve that performance by a bit, but to land somewhere in the same ballpark. And yes, that means it’ll also likely be slower than last year’s Intel-based Surface Pro 8.

The SQ3 supposedly improves the battery life of the Surface Pro 9, which is what this device needs.

Despite that fact, Microsoft is charging $300 extra for the SQ3 model over the base Intel configuration. Considering you’re getting less performance, that extra money might sound hard to justify. Fortunately, there’s more to a chip than just performance, and the SQ3 gives you two major advantages over the Intel model. First, you get connectivity, which is something exclusive to the SQ3 model.

Then, there’s battery life. The SQ3 supposedly improves the battery life of the Surface Pro 9 – and that’s exactly what a device like this needs.

Aside from raw performance, app compatibility has long been the biggest hurdle for Windows on ARM devices. Famously, when the Surface Pro X first launched, many apps weren’t optimized for the ARM architecture, resulting in awful emulated performance in basic applications like Google Chrome – or even worse, apps that wouldn’t run at all.

The situation since then has improved significantly. Most of the apps you’d expect to have available run just fine, including both legacy 32-bit apps and newer 64-bit ones. Many of Microsoft’s own apps have been recompiled for ARM, such as the Edge web browser or Microsoft Teams. There’s still work to be done in terms of convincing more third-party developers to get on board, but the emulation has improved significantly.

Once I get my hands on an SQ3 model myself, I’ll be sure to put it to the test, but there’s a lot we can assume from other recent Windows on ARM devices.

It goes without saying, but the available through the Microsoft Store also run well, even if there are still not near enough apps to make this a proper iPad competitor.

The Surface Pro 9 is at a crossroads

The Surface Pro 9 remains one of the best 2-in-1 laptops you can buy. The upcoming Dell XPS 13 2-in-1 may put up quite a fight, but the Surface Pro 9’s unique set of premium features and gorgeous design keep it at the top of the pack for now.

And yet, there are things that I wish were different about the Surface Pro 9. Apart from the weakened battery life and lack of a headphone jack, it’s also a bit overpriced. That’s especially true if you want both the Type Cover and Surface Slim Pen 2. You’re looking at over $1,300 for a device with only 128GB of storage. Not even Apple charges that much.

And as always, you really have to be sold on the premise of the 2-in-1 to make the price worth it. Laptops like the Dell XPS 13, HP Envy x360 13, and MacBook Air are a better overall value – but they can’t function as tablets like the Surface Pro 9. Nor are they quite this compact.

That said, the Surface Pro 9 is certainly the best the Surface has ever been, especially if you need a tablet that can replace a laptop without a hiccup.