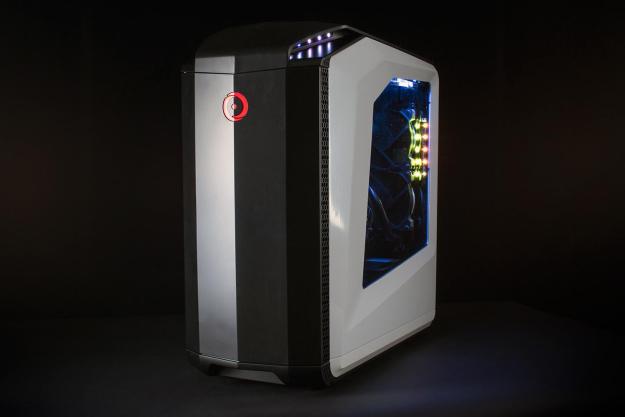 “The Millennium is an obvious choice for anyone who desires unparalleled performance.”

Customization is among the desktop PC’s greatest strengths, yet certain traits are stubbornly set in stone. The internal layout of a desktop is dictated by its case, and completely swapping a PC’s guts from one case to another is not easy. Casual enthusiasts are often frustrated by this limitation, and sink money into a new computer instead of moving all their hardware to a new case.

Origin thinks it has found a solution to this problem with its redesigned Millennium desktop. Unlike previous systems built by this boutique firm, which relied on cases from third-party manufacturers, this new design is entirely unique to the company. In addition to its spacious internals, remote-control LED lighting and customized fan controller, the case lets users change its internal layout to suit their needs.

This feature has potential, but bold new design always hinges on execution, and it’s hard to guess how Origin’s first try at a custom enclosure would fare. And, of course, the system’s total price reflects the effort put into the system; base models start just north of $1,500, but our tricked-out review unit rings up at an astounding $6,900. Does it really make sense to spend almost seven grand on a mid-tower system?

Impressive, functional, but not flawless

One look at the Origin Millennium is enough to get any PC geek’s heart racing. Our review unit, clad in white, looks sleek, modern and powerful. A huge side window, lit up by LEDs that change colors with the push of a button, provides a view of the impressive internals, while the sleek and seamless front panel adds a touch of elegance and class.

One look at the Origin Millennium is enough to get any PC geek’s heart racing.

Yet, there are a few problems shrouded by the Millennium’s flair. A substantial portion of the exterior is plastic and, as such, the enclosure doesn’t feel as premium as the price tag suggests it should. Origin even ships the desktop with a number of red-and-white labels indicating that certain parts of the plastic façade are not to be used as “lift points,” warning that they may break if used to move the desktop around. Materials on the top of the tower are particularly flimsy, and move easily when touched. The difference between the Millennium and Falcon Northwest’s stouter, all-metal Talon is striking.

The Millennium is also massive, measuring nine inches wide, twenty-three inches deep and twenty-two inches tall. Origin claims that this system is a mid-tower, but its size is close to full-tower systems from other manufacturers. To be fair, this gives the enclosure more interior volume than other mid-towers, but consider yourself warned; the Millennium demands a lot of desk space, and may be best suited to live life on your floor, underneath your desk.

While Origin has fallen victim to the fit-and-finish issues that can be expected from a first generation design, the company hasn’t botched functionality. The front ports, located on the top of the system, include four USB 3.0 along with headphone and microphone jacks. They’re arranged so that wires do not stick out from the front of the case, which offers some protection from errant knees and feet. And there are five hot-swap hard drive bays hidden behind the front door, which makes transferring data or install new drives a cinch.

Our review unit, which arrived with an ASUS Rampage IV Extreme motherboard, boasts four more rear-facing USB 3.0 ports, eight USB 2.0 ports, 5.1 audio, S/PDIF, Ethernet, Wi-Fi and a single PS/2 jack. There’s also a plethora of DVI, HDMI and DisplayPort outputs; you’ll run into the limits of the driver software before you run out of ports to connect your gear to.

The modular design of the Millennium (and its big brother, the Genesis) is a major selling point, so we dove into the system’s guts with glee. What we found was a complex mass of features that work well but will likely confuse many owners.

The Origin Millennium is still a PC built by enthusiasts, for enthusiasts.

Opening the case is a breeze. Both side panels swing away with the use of a single switch on the top-rear portion of the Millennium’s tower. Once inside, we found the interior to be roomy, even with three high-end video cards crammed inside. The front-based hot-swap hard drive bays make installing a new drive dead simple, and while the 2.5 inch solid state drive bay is a bit more difficult to access, but it’s still a five-minute job for anyone with a Philips-head screwdriver. All of the internal wiring is tidy, and our review unit came with a modular power supply that makes wire management a cinch.

Ambitious owners can completely change the layout by moving the motherboard from the left to the right, or by rotating the mobo 90 degrees so that its ports are oriented towards the case’s top panel rather than the rear.

Such flexibility is a great trait, but it’d be a stretch to say that changing the Millennium’s internals is an easy task. Wires must be re-routed, multiple screws must be removed and re-installed, and most components will need to be disconnected from the motherboard while you redecorate the Millennium’s guts.

The Origin Millennium is still a PC built by enthusiasts, for enthusiasts. Changing the layout can be useful, but it’s also complex, and not something most will feel comfortable doing. You can have the system built to your preferences from the factory, however, and Origin is willing to do the work for you if you ship the system back.

Our review unit’s Core i7-4960X processor arrived with a factory overclock of 4.7 GHz. This six-core monstrosity broke our SiSoft Sandra Processor Arithmetic record of 213 GOPS, which was held by the previous Origin Millennium, with a score of 223.86. Even the Falcon Northwest Talon, which we tested with an overclocked quad-core Intel Core i7-4770K, scored just 152 GOPS.

Origin’s Millennium isn’t perfect, but checking all the options buys you one of the quickest consumer desktops ever produced.

7-Zip’s file compression test also showered the Millennium with praise, turning in a result of 38,704. This does not beat the previous version of this system, which also had a six-core processor and scored 39,059, but it comes close. The Millenniums remain the only systems we’ve ever reviewed to score above 30,000 in this benchmark.

PCMark 8’s storage test turned in a score of 5,019. This again comes in just a tad behind previous Origin Millennium, which scored 5,030. The previous model used two SSDs in RAID 0, however, while the new version has a single 1TB Samsung 840 Evo. This means better reliability and more storage at a lower price.

The Millennium’s three Nvidia GTX 780 Ti video cards generated a 3DMark Cloud Gate score of 35,719. That’s thousands more than the Falcon Northwest Talon, which had a single GTX 780 Ti, and 15,000 more than the Cyberpower Zeus Mini, which had a single GTX 780. While going triple-SLI is of questionable value given that three cards don’t result in triple the performance, it’s clear that the multi-card setup can dominate any single video card.

A 1080p monitor doesn’t challenge the Millennium, so we upped the ante to a 2560×1440 display and ran tests using our usual suite of Total War: Rome 2, Battlefield 4 and League of Legends in real world conditions.

At medium detail, this game produced an average of 97 frames per second with a minimum of 80 and a maximum of 126. At extreme detail, its highest setting, the game still managed an impressive average of 68 FPS with a minimum of 57 and maximum of 82. This ties what the Talon offers at 1080p, and dominates the Cyberpower Zeus Mini, which reached just 58 FPS at 1080p.

With Battlefield 4 set to medium detail, it ran at its maximum framerate of 200 FPS for the duration of our testing. Setting detail to ultra produced an average of 143 FPS with a minimum of 53 and a maximum of 200 (which, again, is the game engine’s cap). This is more than enough for a smooth experience.

An overclocked six-core processor with three video cards is bound to suck down power, and our instincts were backed up by our wattmeter’s readings. Even at idle, the Millennium draws 168 watts, more than twice the power consumed by the Falcon Northwest Talon. The previous six-core Millennium drew 106 watts.

At full load, the Origin Millennium consumed 1,023 watts. That shatters the previous all-time high of 634 watts held by the elder Millennium. The Talon, which is about 35 percent slower in 3DMark’s Cloud Gate test, uses almost three times less power at maximum load.

The Origin Millennium emitted 46.7 decibels of fan noise at idle and a maximum of 53.3 dB at load. Both figures are high, but our early-production review unit lacked a fan controller that will be included with models that ship to customers. The company says that the final production systems produce as little as 30 dB at idle, and no more than 52 dB at load. If correct, these numbers line up with other high-end systems. Only Falcon Northwest consistently builds quieter hardware.

Origin’s latest Millennium lives up to the high standards set by its predecessor. The system breaks performance records in several benchmarks, and also provides a new enclosure that’s more flexible and more spacious than anything offered before.

$6,900 is a lot of money to spend on a desktop PC though, and brings the Millennium’s value into question. However, a close examination reveals that the Origin holds up well. The Falcon Northwest Talon provides the closest competition, but is slightly more expensive when equivalently equipped. Downgrading the Origin to the Talon’s level does result result in the loss of some UEFI features and PCIe 3.0 compatibility, but most users won’t miss these extras. The Talon’s only notable advantage is bundled 802.11ac Wi-Fi, which is provided by its ASUS X79 Deluxe motherboard.

On top of that, Maingear charges over $7,000 for a similar set-up in its Quantum Shift rig, and Digital Storm charges over $7,500 for an equivalently quick Hailstorm II. These competitors make the Millennium seem reasonably priced, and even inexpensive by comparison. The price also includes a three-year warranty, which isn’t standard, but was checked as an option on our review unit’s specification sheet.

Many buyers will find the Talon to be a more sensible choice. Smaller and less expensive, but still quick, it’s a better fit for gamers and power users. The Millennium offers features the Talon doesn’t, however, such as a modular case, space for three video cards, hot-swappable hard drive bays and a robust buffet of ports.

Origin’s latest is an obvious choice for enthusiasts with bottomless bank accounts who desire unparalleled performance and maximum functionality.

Topics
The best touchscreen monitors in 2023
The best keyboard wrist rest in 2023
40 years ago, Apple’s original Macintosh started a revolution
The best gaming PCs for 2023: Dell, Origin, Lenovo, and more
How to watch Super Bowl 2023 on your computer
Microsoft Word vs. Google Docs
Turns out DirectStorage isn’t killing frame rates in Forspoken after all
Best laptop deals: Save on Apple, Dell, HP and Lenovo
Wi-Fi not working? Here’s how to fix the most common problems
The best Chromebooks for 2023
Best microSD cards in 2023: top picks for your computer, camera, or drone
The best game-streaming services for 2023
Ranking all 12 versions of Windows, from worst to best