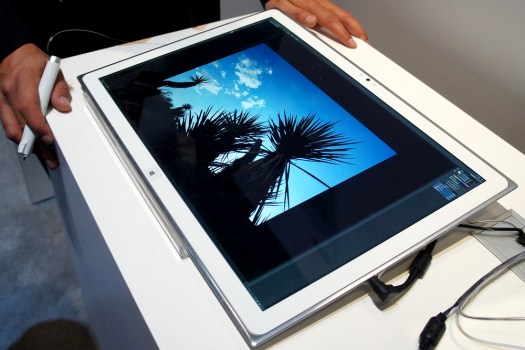 When one usually thinks about a tablet, one imagines a device that’s at least vaguely portable. However portability clearly wasn’t at the top of Panasonic’s list of considerations when it sat down to develop its latest model. How do we know? Because it has a massive 20-inch screen, boasting a frankly astonishing 3840 x 2560 pixels, a resolution that’s slightly higher than 4K.

Before you start working out which body part to sell so you can put down a deposit on Panasonic’s new beast of a tablet, you should know it has only been teased at CES 2013 and is currently a development prototype. It doesn’t even have a name yet.

What it does have is a spec list though. We’ve mentioned the 4K resolution, 230ppi, 20-inch IPS panel already, but not that it’s running on an Intel Core i5, 1.8GHz, dual-core Ivy Bridge processor with 4GB of RAM, a 128GB SSD and an unspecified Nvidia GeForce graphics card. Windows 8 Pro is the tablet’s operating system and it comes with support for a digital pen, plus there’s the usual array of USB ports, a micro SD card slot, Bluetooth 4.0 and an HD video camera.

Naturally, a tablet this size is no lightweight, so the 2.4kg (5.3 pounds) figure isn’t really a surprise, but you wouldn’t want to carry it about all day. Despite its overall heft, Panasonic has managed to get the chassis down to less than half-an-inch thick. So who does the company think will buy one of these? It says the screen “embodies the characteristics of printed media, with texture rich rendering and natural handwriting” that existing tablets cannot provide. In a scenario describing how it could be used, the Panasonic behemoth shows up at an editorial meeting, where magazine proofs are checked and revised on screen, as the tablet can display A3 pages at almost full size.

A reporter for Engadget said that up close, the tablet’s screen “looks like a photo,” and we’d expect pro photographers and video editors to be interested in the device too. It’s not really for playing Angry Birds, but professional types will probably be queuing up to try it if the price is right.

On the subject of availability, Panasonic isn’t committing to a date, saying only that it’s going to “strive to commercialize the 4K tablet, making it available globally to provide new business values to customers.” Exciting stuff.