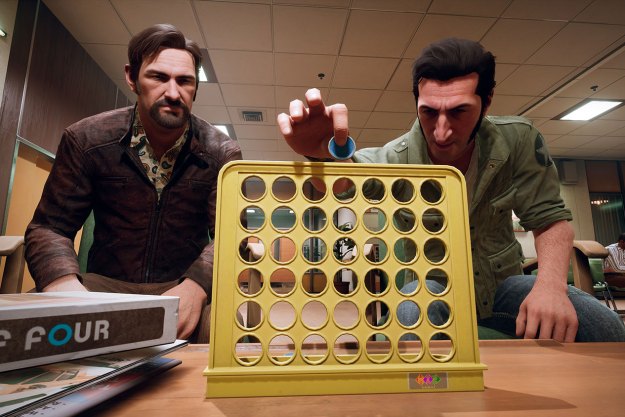 “Though it's fun with a friend, A Way Out struggles with clunky set-pieces and story clichés.”

Back when it was first announced, A Way Out was high in the running for the most interesting games to pop up at E3 2017 — or at least, the most interesting thing coming from a major publisher. Developer Hazelight and specifically, its director, Josef Fares, presented what looked like an innovative and intimate tale built on the relationship of two unlikely comrades depending on each other to survive.

Fares and Hazelight were telling a story that relied on both interactivity and cooperation to build its characters, and presented that story by showing players both perspectives at the same time, all the time. A Way Out‘s combination of cooperation, bespoke gameplay experiences, and two-screen storytelling sounded like it could become a fun new recipe in the interactive storytelling cookbook.

In practice, A Way Out doesn’t quite have the story foundation to support its lofty ideas. There are moments when the game presents interesting story and gameplay ideas, and going through it with a second person who’s finding their way through puzzles and watching the story unfold with you can be a lot of fun. At the same time, those lofty ideas and promises of narrative intimacy do not hold up. A Way Out carries itself with the stature of a compelling and challenging story, but delivers clichés.

Leo and Vincent are stuck in prison, one because he was betrayed, the other for a murder he claims he didn’t commit. Meeting in prison, the pair don’t initially like each other, but the straight-laced Vincent keeps finding himself in a position to save the hotheaded Leo from getting shanked in the prison yard. Eventually, they find common ground, and a trust develops as they try to find their way out of both the prison, and the larger mess they’ve found themselves stuck in.

Players make their way through A Way Out‘s mostly linear story in a constant split-screen format that shows Vincent on one side, Leo on the other — even in online play. The presentation gives both men’s experiences to each player at all times, creating an omniscient viewpoint that tracks their relationship as they strike up a rapport, realize they both have a common gangster enemy, and hatch a plan to escape prison and get their revenge.

The seeds of an emotional story are there… Those seeds never really take root, though.

The seeds of an emotional story about the two men’s struggles are there. Leo and Vincent seem obsessed with getting out of prison to deal with the gangster Harvey, who separately betrayed Leo, his accomplice, and killed Vincent’s brother when the pair got too involved in criminal enterprises. That story is quickly complicated by their strained family lives. Leo has a devoted wife who’s fully aware of his criminal lifestyle, but the pair of them are trying to hide Leo’s imprisonment from their young son. Vincent, on the other hand, is a white-collar criminal whose dumb choice to get involved in money laundering has left pregnant wife is stuck without his support, and seemingly contemplating divorce.

Those seeds never really take root, though. Leo and Vincent never really clash or disagree, and most of what makes them trust each other is that one often has to jump over a big gap and the other has to catch him on the far side. Add the fact that their dialogue is hammy and cliché as well, and it’s hard to feel much for either of them, or the friendship they strike up.

Even the idea that these two guys must break out of prison and stop Harvey feels underrealized. There’s not enough discussion to really sell that Vincent and Leo are so driven to get this guy. Diversions that take both men to see their families don’t build much on their characters either, or answer the question of why the whole revenge thing is worth the risk. Once the characters are out of the prison and fully engaged in going after Harvey, it all feels a bit shallow.

A game with an unremarkable story could still an interesting mechanic to great effect, though, and A Way Out has a novel technical hook in its continuous split-screen presentation. Unfortunately, the game never really deploys that mechanic in especially compelling ways.

In one scene, Leo and Vincent are on the run from the law after their breakout, but divert from their plans to make a risky visit to Vincent’s wife in the hospital after she’s given birth. As one screen focuses on Vincent’s moment with his family, the other player is free to keep walking around the hospital as Leo. It’s nice that a cutscene doesn’t preclude interactivity for the players in some cases (but not all of them), but there’s nothing really for Leo to see or do out there.

This is the problem: More often than not, the game passes on opportunities make use of both characters’ viewpoints in a meaningful way to expand the story. The scene could have been a great chance to examine Leo and Vincent’s relationship — presenting the same event from two viewpoints to emphasize Leo’s perspective on a scene that would normally focus exclusively on Vincent.

The variety often makes seeing what happens next worthwhile.

Without that kind of direction, there’s little gained from showing the two perspectives simultaneously when you’re not in an action scene. So, as it stands, the split-screen approach largely come off as a gimmick, instead of a real storytelling device.

That gimmickry still works, though, at times. The split-screen gameplay works well during A Way Out’s puzzle sequences. Most of these stem from Vincent and Leo teaming up to sneak past guards or cops; or find supplies by, for example, holding up a gas station without getting caught by police. A Way Out never makes these de facto puzzles particularly difficult to solve, instead relying on the fact that it’s cool to watch both perspectives as one character does something like create a diversion, and the other sneaks past the unknowing adversaries. Occasionally, the game offers more than one path through an area, either by allowing Leo and Vincent to debate over their course of action (Vincent’s non-confrontational approach of Leo’s usually violent one), or by finding multiple solutions to the same problem. The planning and problem-solving in these scenarios makes working together and seeing both perspectives a bit more meaningful.

Even if the story can’t do the heavy lifting to create an emotional tale, the cooperation between players still makes much of the experience fun to share. Executing two roles simultaneously to accomplish a goal is never not fun — see also: all multiplayer games — and A Way Out keeps things fresh by asking Leo and Vincent to do many different things. In one scene, one player keeps lookout as the other uses the stolen tool to break out of their cell — and then they switch. In another, both players have to land carefully timed button presses to sync their movements as they climb a ventilation shaft. Even action-heavy scenes that rely on quick-time events — timed button prompts that represent complex action — are fun without being frustrating. The variety often makes seeing what happens next worthwhile.

Not every gameplay sequence is a winner, though. Late in its run, A Way Out starts to drop in sections action-heavy sequences that are neither well thought out or well made. From an Uncharted-style driving chase with irritating, floaty driving controls, to a huge cover-based third-person shooting gallery, these moments feel like out of place and, more importantly, create some frustrating moments.

A Way Out is a better idea than it is a game. There’s something to its cinematic presentation, its parallel stories, and its bespoke cooperative gameplay. It just never comes together as the unique, exciting game it’s clearly striving to be. The plot simply isn’t that strong, the dialogue is never very compelling, and the characters don’t develop beyond their broadly drawn archetypes. Without those things, A Way Out never lives up to its potential.

A Way Out‘s cooperative experience and general accessibility make it unique among video games. You can find engaging co-op experiences of all shapes and sizes in games like Love in a Dangerous Spacetime, Hidden Agenda, and Portal 2, but there aren’t many alternatives with this game’s narrative focus.

With a pair of experienced players, it’s possible to breeze through A Way Out in five or six hours. Players who aren’t as used to controllers will take a bit longer.

Probably not. Unless you are looking very hard for a story driven game to play one with one friend and one friend only, A Way Out won’t blow anybody’s mind.

Topics
The best upcoming PS5 games: 2023 and beyond
PS Plus adds Evil Dead, OlliOlli World, and more in February
The best upcoming Xbox Series X games: 2023 and beyond
MLB The Show 23 returns to Xbox, PlayStation, and Nintendo Switch this March
WWE 2K23 improves the wrestling sim with subtle tweaks and a bit of chaos
Meta Quest Pro VR headset is $400 off (and save on Meta Quest 2)
How to change classes in Fire Emblem Engage
Fortnite: How to collect Dragon Balls on Adventure Island
How to get all Emblems in Fire Emblem Engage
Fire Emblem Engage bond levels: how to get max Bond Levels fast
Marvel Snap Battle Mode: How to play Marvel Snap with friends
Best Gaming PC Deals: Save on RTX 3070, 3080, 3090 PCs
The best video game remakes reinvent the classics, they don’t just revisit them