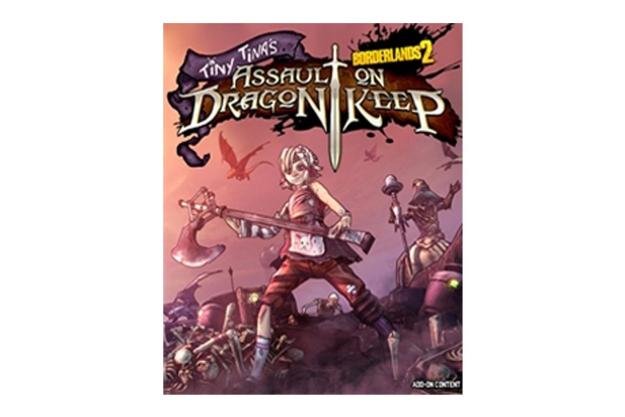 Imagine a world in which the final episode of Lost wasn’t completely terrible. The end would still be the same, in that offering emotional closure took precedence over answering questions, but it was… you know… good. Entertaining. That’s what the final downloadable content pack for Borderlands 2 is all about. Tiny Tina’s Assault on Dragon Keep leaves questions about other Vaults and Seraph Guardians for another day, and focuses instead on bidding everyone a fond farewell.

And it’s all wrapped in the delicious candy shell of magic and dragons and shit.

At first glance, the final batch of DLC for Borderlands 2 seems to be an offbeat delivery system for bringing more Tiny Tina into your world. The pre-adolescent sociopath is a fan favorite of the 2012 game, and she returns here to literally host an adventure that sends our Vault Hunters into a fantasy role-playing landscape called Bunkers & Badasse, a playfully on-the-nose stand-in for Dungeons & Dragons.

In terms of the play, this is still Borderlands 2. You’re shooting and you’re looting all the way through, swapping old gear for new based on incrementally higher stats. It’s the set dressing that’s changed. New grenade mods become spells, issuing forth from your chest as your character utters an arcane incantation like “FIREBALL!” Similarly, class mods continue to function as they always have, only now they carry setting-appropriate titles like “Lawful Neutral Ranger.”

Pandora is changed too, in that you aren’t actually exploring it in Dragon Keep. The DLC’s story blends fantasy and reality in a necessarily unusual way: you can visit any of the new locations via any old Fast Travel location, but all of them are ostensibly just fabrications sprung from Tina’s head. The result is a mix of high fantasy standbys, from the clockwork Dwarven mines to the gloomy forest on the outskirts of town to the soaring turrets of an evil wizard’s castle. Laid on top of it all is a new musical score that evokes an appropriately fantasy feel.

Tina shapes it all as well while you play. She doesn’t really know what she’s doing, and so she’s prone to send you into a “deadly” region of rainbows and sunshine or pit you against a max-level dragon boss as your first major combat encounter before backpedaling, at which point the world re-forms itself around you. These alterations are always superficial, but they lend a playful feel to the proceedings. Pandora has a tendency to feel very static; Dragon Keep‘s locations don’t necessarily brim with life outside of the monsters trying to kill you, but the malleable landscapes add some unexpected flavor.

Speaking of things trying to kill you, there’s a lot of that in Dragon Keep. Dragons, treants, orcs, evil wizards, knights, archers, skeletons, even mimics… a whole mess of entirely new enemies (rather than the re-skins of previous DLC) that require new strategies. Take the Immortal Skeletaur, a hulking pile of bones with a blue-glowing sword run through its gut. This fella keeps getting up whenever you take him out, that is until you run up and pull the unlife-giving sword from its belly. Then there are Pixies, a non-hostile creature that follows you around and applies a buff… until you inevitably, accidentally damage one, at which point you find yourself contending with a maniac pixie nightmare girl.

Dragon Keep also brings along some fresh uses for the Eridium that you’ve spent so much time hoarding. A pair of slot machines in the DLC’s central town only accept the purple ore as payment. You’ll also spot glowing shrines scattered around the world – usually in close proximity to a big battle or boss encounter where you’re able to spend Eridium on a limited-time buff, everything from health and damage boosts to ammo regen. The last new Eridium sink comes in the form of Dice Chests. Open one of these and a D20 dice roll determines the quality of the loot that you find. Spend some Eridium and you get to roll two dice, with the higher value then applied to the chest gear.

Complementing all of this is an almost reverential level of fan service. If there’s a beloved – or despised – character in the Borderlands universe, chances are you’ll see him or her (or it) pop up at least once as you explore every corner of Dragon Keep. Individual quests – both from the story and the optional tasks – nod toward every fantasy trope and work of pop fiction imaginable, only the cast is filled out by familiar players. The princess that you’re off to rescue in your titular assault on Dragon Keep is an extra-special surprise, more than offsetting a somewhat disappointing final boss fight – though the new Seraph Guardian battle also helps on that count. If you’re looking for a challenge in this DLC, you won’t be let down.

For all that is new, many of the issues that plagued the vanilla version of Borderlands 2 continue to linger. The biggest of these is the lack of any sort of indicator to help guide you through the elaborately designed environments. This is particularly problematic on those occasions that you return to a saved game mid-mission. Checkpoints are sporadic at best and the path to your next objective is often unclear. It may be a bit much to hope for mechanical changes at this late stage of Borderlands 2‘s life, but even something as simple as clearer in-game signposts would be welcome.

Gearbox Software ends its run of Borderlands 2 DLC on the highest note possible… assuming of course that it’s really all done. The four packs attached to the game’s Season Pass have all now been released, but the story wrap-up definitely leaves a door open for at least one more romp with your battle-hardened Vault Hunters. Whether or not there’s more to come, the stuff that’s here is the best we’ve seen yet, no question. If you’ve been looking for a reason to head back to Pandora, Tiny Tina’s Assault on Dragon Keep is it.

(This DLC was reviewed on an Xbox 360 using a download code provided by the publisher, 2K Games.)