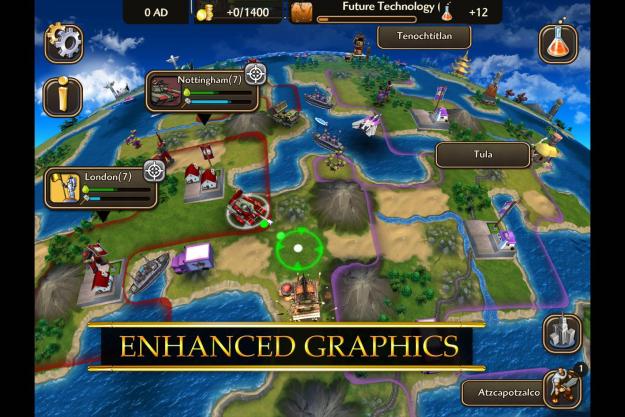 “Civilization Revolution 2 doesn’t go far enough as a sequel to justify its existence or $15 price tag.”

Civilization Revolution 2 is … frustrating. On the one hand, it’s a fully portable take on Sid Meier’s wonderful series. The Wonders, the multiple victory conditions, the climb through humanity’s sum total of technological development … it’s all there. Start out with a band of settlers in the Stone Age, found a city, research some tech, and grow your people from there.

The problem is, we’ve seen all of this before. Civilization Revolution came to iOS devices in August 2009, and very little has changed. The graphics are a little sharper and there are a few new baubles to play around with, but as a sequel, this game is bafflingly light on evolution. Even elements that could have been improved upon – hell, things that needed improving – are left untouched.

It’s almost better to walk in as a noob, untrained in the ways of other Civilization games.

Let’s back up. As a whole, the Civilization series is built around players guiding their chosen people – French, Americans, Germans, and an assortment of others – through the different ages of history. It’s turn-based strategy with an emphasis on exploration and sandbox play.

There’s nothing that requires, say, the American people to embrace Democracy. Each civilization starts the game with different bonuses, but how it develops is up to you.

In Civilization Revolution – both games – the focus of the gameplay remains the same, but many of the underlying systems are simplified or done away with entirely. It still carries the essence of Civ, but in a way that’s been modified to suit the platform that the game exists on. There’s a learning curve for Civ players used to the PC version, and not just in terms of mechanics.

It’s almost better to walk in as a noob, untrained in the ways of other Civilization games. While a tutorial teaches basic mechanics – how to move, build, and so on – there’s nothing relating to strategy. Newcomers will jump into a game and simply learn by doing, but veterans are likely to be puzzled by the lack of Worker units, for example.

The problem isn’t that systems are dumbed down, it’s that there’s not enough signposting in place to communicate the changes to longtime fans of the PC game.

An even bigger problem is the fact that Civilization Revolution 2 feels more like an expansion pack than a sequel. It’s a surprising turnaround for a series whose expansion packs typically amount to wholesale rewrites of major rules. There are a few new units, structures, and Wonders, plus two new Civ leaders – puzzlingly locked away behind special Achievements – but little more beyond that, other than the visual overhaul.

It’s not all bad news. A powerful and surprisingly flexible Scenario Generator allows you to set up very specific games, with switches and sliders that tweak everything from the time period to the victory conditions to the frequency and aggression level of barbarian units. There’s also a lengthy list of pre-built scenarios, many inspired by real-life history, that offer more directed play experiences.

The hardest pill to swallow here is, unfortunately, the price. We generally avoid any discussion of a game’s cost in reviews, but it’s unavoidable here. Civilization Revolution 2 is “premium”-priced at $15. Meanwhile, the relatively similar Civilization Revolution sits at $3, and the earlier game even includes a multiplayer mode that was banished in the sequel because (according to 2K Games) no one used it.