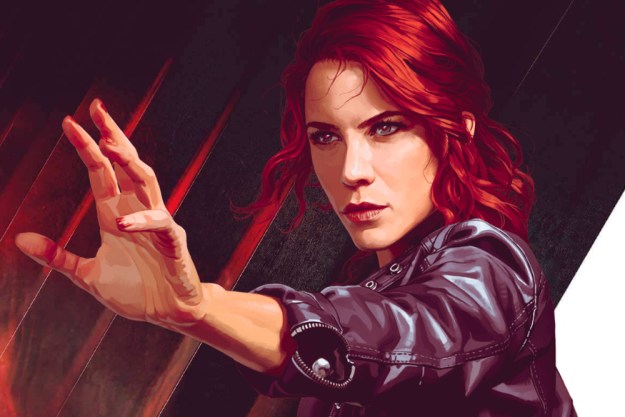 “Control delivers on combat but can’t tie together its story”

Remedy Entertainment doesn’t step up to the plate looking to hit singles. The Finnish game developer has prided itself on creating cerebral and intelligent shooters that leave us perplexed and surprised in between moments of action and violence. For its latest game Control, Remedy has certainly played to its strengths. A bizarre paranormal action game that feels like it can sit alongside The X-Files, Control certainly takes a big swing with a complex science-fiction narrative and several awesome paranormal powers. It sometimes gets tripped up with too many story threads and some technical issues, but the sheer weirdness of Control is enough to carry it.

Set in New York City during the very-near-future, Control takes place in The Oldest House, the hidden headquarters for a mysterious government agency called the Federal Bureau of Control, or FBC. Control follows protagonist Jesse Faden, a woman on a mission to uncover the mystery surrounding her brother Dylan’s sudden disappearance. In a strange turn of events, Jesse soon finds herself in the role of director — a position given to her by the FBC’s “Service Weapon.”

Much like the wand chooses the wizard in Harry Potter, the Service Weapon chooses Jesse for the director role. The new position works to her advantage as nearly every employee of the Bureau bends to her will.

Control certainly takes a big swing. It occasionally whiffs in the process.

Enemies, dubbed the “Hiss”, are people that have been possessed by a mysterious “paranatural” force. Some are prone to attacking you while others eerily hover in the air. The more formidable enemies have shields that increase their defense or wheelchairs that allow them to fly and quickly avoid attacks.

The Service Weapon looks like a pistol at first glance, but it is much more than that. Control calls it an Object of Power, an item that uses paranatural forces to shape-shift. This power transforms the Service Weapon into an entire arsenal in one gun.

Its revolver-like power can be swapped for a charged-up sniper blast, a shotgun spread, and an automatic machine gun. Each comes with its own advantages and disadvantages. Standard shots can take down most enemies, but you need to get creative when dealing with stronger foes. Some enemies, for instance, will only go down if you break their shield or aim for the head. Coming off the surprisingly weak gunplay of Remedy’s Quantum Break, this variety to the gunplay makes Control feel miles better. Every shot has a satisfying thud that feels as though you are really hitting your target. Enemies also respond to each shot instead of limply falling to the ground after taking enough damage.

Gunplay is only half of the combat equation in Control. Over the course of her journey, Jesse unlocks telekinetic abilities that other employees at the FBC do not have. These abilities include “Launch,” which turns Jesse into a Jedi that can throw distant objects at her enemies, as well as “Seize” which lets her turn wounded enemies on their allies. Abilities compliment gunplay well and are often the difference between life and death in combat. For example, armored enemies take far more damage from thrown objects than bullets. If you want to improve on the effectiveness of those telekinetic throws, you can purchase upgrades and personal modifications using points.

Sprinting around a level of the Oldest House while blasting the Hiss with your gun and chucking canisters at them is delightful from the beginning of Control to its closing credits. That said, Remedy could have been more creative with its powers. I’ve seen them all, including telekinesis, done in other games like Second Sight before. Though the powers feel more fluid here, it would have been nice to have a few that really feel innovative.

When you’re not fighting the Hiss, you’re exploring the nooks and crannies of the Oldest House, searching for a way to your next destination. This isn’t a particularly complex task in most games, but Control’s world is ever-changing. As you clear the Hiss, the area around you will begin to morph, opening passageways and platforms that weren’t there previously.

It’s a neat trick used sparingly enough to not wear out its welcome. Combined with the Metroid-style backtracking you’ll be doing as your rising security clearance gives you access to new rooms, this shape-shifting mechanic makes exploration just as engaging as the battles. It’s further bolstered by documents and audio logs scattered everywhere, giving you additional insight into the Bureau’s activities and the technology it researches. A lot of games have these sorts of hidden collectibles and world-building moments, but Control makes them worthwhile. Certain lines are redacted with black ink, always raising another question with every answer given.

Abilities compliment gunplay well and are often the difference between life and death in combat.

Control’s presentation is undoubtedly its strongest attribute. Live-action video segments played on CRT monitors — the Bureau has a strict “no smart technology” policy — are woven seamlessly into the environment. The game is gorgeous (despite a few hitching and texture issues with the Northlight Engine, the same engine used in Quantum Break) featuring lifelike faces, wonderful lighting effects, and brilliant particle effects that make every moment a wonderful sight to behold. Stylish audio and text queues, such as a loud thud as a large text suddenly appear on the screen, make reaching a new area a treat. Tremendous acting performances, particularly with Dylan Faden and a strange old janitor, add to the experience as well.

Side missions and limited-time activities rewards and additional story threads on characters you encounter. Yet Control doesn’t really feel like a game designed for this sort of content. Missions often send you halfway across the map, and though fast travel is unlocked after you cleanse the Hiss from an area, it still breaks up the pacing in a way that can ruin the sense that Jesse truly desperate to find her missing brother. Some of the later side missions, including one to destroy mold in a dangerous sector, are included for after you’re done with the game, but we didn’t want to drop what we were doing to complete glorified fetch quests.

At the heart of Control is the mystery regarding Jesse’s missing brother and the true intentions of the Federal Bureau of Control. Though Remedy and writer Sam Lake do their best to address the paranormal anomaly in Control’s closing moments, it’s ultimately unclear. The more pertinent questions are left up in the air for a potential sequel but providing players with so few answers ultimately leaves it less satisfying than it could have been.

Control feels like the first step in a bigger project for Remedy Entertainment. While it doesn’t reach its full potential in storytelling and there isn’t enough variation in the combat, the powers that are there are great and the creepy atmosphere complement the action well. Traditional single-player games that aren’t bogged down in level-gating or unnecessary role-playing mechanics are a rarity these days, and that alone makes Control worth paying full price for.

No. In 2019, your options are fairly limited for story-driven third-person shooters. Remedy’s Quantum Break is cheaper but it’s also far less satisfying to play.

It took around 10 hours to complete the game but completing all side missions will add a few hours more.

Yes, especially if you enjoyed the powers mechanic in Quantum Break or are interested in a pretty shooter with paranormal themes.