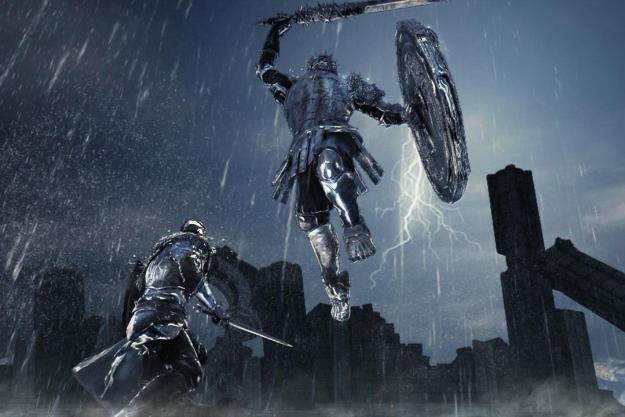 “Dark Souls II manages to make a now-familiar formula feel friendlier than ever, while still challenging veteran players with plenty of new surprises.”

A decrepit monarch stalks the dark halls of his own dank crypt. Dragons soar and perch high above your head, occasionally spitting a fireball down toward the ground and whatever prey happens to be there. Everything from the piglets scurrying through the grass to that statue over there – yeah, that one – is out for your blood. Dark Souls II is definitely still Dark Souls, but there’s something different, too.

As a sequel, it has a substantial legacy to live up to, and developer From Software played it safe in a lot of ways. The transition from Demon’s Souls to Dark Souls was a major overhaul, with many fundamental systems being altered. But this time there’s been a lot less revamping and much more refining. Many of the changes exist to make things simpler. That dirty word, “accessibility,” inevitably comes up here.

For example, there’s a new item that lets you respec your character’s stats. Weapon upgrades are much easier to manage, and they’re all handled by a single blacksmith. Gear also now repairs automatically at bonfires, provided you haven’t broken something entirely (though they also degrade much more quickly). You can voice chat with other players now. There are countless small tweaks like that, and they add up to a game that somehow manages to feel more friendly while still handing you your ass over and over.

Like its predecessors, every action you take during battle in Dark Souls II has weight and consequence to it. Button mashing is death. Your arsenal is substantial; swords, spears, halberds, whips, spiked knuckles, spell-casting catalysts, weaponized scorpion tails, jagged knives, lightning crossbows, gloves that shoot fireballs — every possible preference you might have is covered. There are more weapons, armor choices, spells, and shields than in either of the previous two Souls games, and they all have their own unique move sets and properties. Yet one wrong move in combat can mean your death – yet again – at the hands of even the lowliest enemies in the game.

That soul-crushing difficulty is one of the things Dark Souls aficionados like to crow about, and despite whatever fears fans may have had about Dark Souls II becoming more “casual,” it’s every bit as difficult as the two games that preceded it – possibly even moreso. You’ll block, jump, swing, parry, riposte, shoot, cast, pray, and die, over and over and over. But unlike in the previous games, this cycle is not quite as infinite this time around, and it’s one of the most controversial changes to the series: In Dark Souls II all enemies have finite respawns.

Kill enemies a dozen or so times and they won’t appear again. There are ways around this, like a new item called a “bonfire ascetic” that resets an area back to square one, with all enemies, treasures and even bosses back in place and boosted in strength. And of course there’s also the New Game+ option, which lets you start over from the beginning, keeping your equipment, level, and souls, after you beat the game. From Software even made it more enticing, with different enemies and new items to find the second time through.

This ‘finite respawns’ change is still a blasphemy. Dark Souls should never get easier, no matter how many times you fight the same enemies; you should just get better. That’s part of the mantra – or it was. Now you can just cheese through an area by killing the same small groups of enemies until they stop respawning. It feels like the newer Mario games that give you an invincible golden Tanooki suit because you’ve died too many times in a row on the same level.

Countless small tweaks… add up to a game that somehow manages to feel more friendly while still handing you your ass over and over.

That said, the change does make the game’s grind for souls feel less repetitive. It can be a relief when enemies start to disappear and you’re able to push forward to the next section, filled with fresh combatants and obstacles. Combat in Dark Souls II is as tense and rewarding as ever, but it’s the promise of new challenges – not endless rote repetition – that fans love. And thankfully there are new challenges everywhere in Dark Souls II.

The land of Drangleic is overrun with fell monsters. The king is gone, having abandoned his cursed kingdom eons ago. The people have fled or turned Hollow – the series’ term for “undead” – and adventurers, rogues, thieves, and pilgrims travel from distant lands to test their mettle or seek their fortunes here. It’s a new version of the same dark fairy tale told in the past two games, and the new cast of characters, enemies, and gods is satisfyingly enigmatic. Just like before, they feel like real people with their own agendas and motives. From Software has this down to a science by now.

But Drangleic does not have the same cohesiveness that Dark Souls‘ land of Lordran did. That earlier game’s honeycomb level design, wherein each new area seemed to connect with three others, is gone, replaced by a massive sprawl with more linear transitions from area to area. The change is understandable; when they freed you up to use bonfires as fast-travel points from the outset – unlike Dark Souls, which doesn’t allow that until halfway through – the designers also freed themselves up to create the levels they wanted to without needing to worry about making it all lock together quite so intricately.

Dark Souls II‘s environments are designed, in part, to evoke various fears and phobias, terror induced by things like darkness or heights. There’s a soaring tower of flame, a ghostly pirate cove, and a haunted French prison. You’ll go from a nightmare castle directly to an underground lake, and then a pitch black crypt filled with zombies and ghosts. There are new areas so gorgeous and majestic, they make the previous game’s Anor Londo, a home to gods, look like the undead burg. The dragon-filled vista seen in many a trailer is easily the most breathtaking environment in the whole series.

The Souls series’ unique multiplayer, in which players jumping in and out of one another’s games to duel or team up, has always been terribly inconsistent. At the moment there’s no trouble finding co-op and PvP partners, but as the months pass and the player pool thins out, that could easily change. With all the new covenants and multiplayer arena features, From Software clearly wants to make up for past mistakes, but it’s still impossible to simply match up with your actual friends for some co-op fun. Wanting to play with your buddies instead of strangers may not be fully in the spirit of “jolly cooperation,” but it would still be nice. And during launch week, the servers (on Xbox 360, at least) have been down more than not.

Dark Souls II is the most accessible the series has ever been, but only insofar as new players should have an easier time getting into it at the beginning. If they make it to the end, they’ll be just as hardened as the rest of us; and thus, we learn that “accessibility” doesn’t need to be a dirty word after all. As the third game in the series, Dark Souls II doesn’t feel as novel as its predecessors, but instead possesses a warm familiarity and unshakable confidence. You will explore, and fight, and laugh, and cry – but you’ll never forget that this is Dark Souls, and you had better be prepared to die.

This game was reviewed on Xbox 360 using a copy provided by Namco Bandai.

Dead By Daylight celebrates its birthday with a dating sim