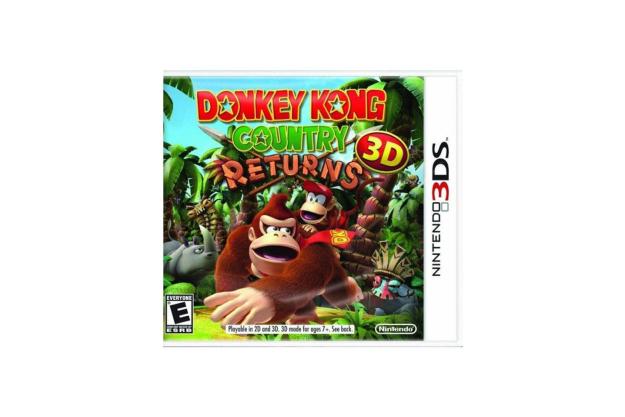 “‘Donkey Kong Country Returns 3D helps to correct some of the problems of its Wii original.”

The Nintendo 3DS has an amazing propensity for second chances, but it’s surprising to see the little handheld making up for the Nintendo Wii’s mistakes. That’s precisely what Donkey Kong Country Returns 3D is: An apology for one of Nintendo’s most botched releases in recent memory.

The strangest thing about the Nintendo Wii is its legacy – or at least what its legacy will shake out as. Nintendo sold just shy of 100 million Wiis over the last seven years, and it owes that success to the popularity of motion-controlled games, in particular Wii Sports, Wii Fit, and Mario Kart Wii. Waggling the old Wii remote won’t be what Wii is remembered for in the gaming canon, though. If ever there are gaming history books, the Wii will be remembered as the greatest home for platformers ever conceived. Wii hosted both the company’s 8- and 16-bit classics, as well as a torrent of excellent brand new entries to the genre. It was a one stop shop for the platformer junky that didn’t want to play on PC. Oddly, what should have been its triumph was actually its greatest failure: Donkey Kong Country Returns.

Retro Studios’ resurrection of the Rare-developed series from the ‘90s had all the pieces to be nearly perfect. Great level design, a solid sense of humor, and an overall package that recognized – but wasn’t beholden to – the classics. The Wii’s raison d’être almost ruined it, though. In order to one of the most basic moves in the game, you had to shake the remote. In a brutally difficult game about precision, the imprecise nature of motion controls made playing it a frustrating chore. What’s more, in classic Nintendo fashion, you couldn’t change the control inputs or any other game settings. In order to play, you were stuck with the gimped controls, present for no reason other than novelty.

Monster Games (Excite Truck, Pilotwings Resort) to the rescue. The company has remade Donkey Kong Country Returns for the Nintendo 3DS, and while the bulk of the content here was in the Wii release, it is an infinitely better package. For starters, the entire game can now be controlled with just the buttons on the Nintendo 3DS. Donkey Kong can run, jump, pound the ground, and even blow to put out fires and scatter dandelion seeds. One of his most essential moves is the barrel roll, which you do for attacking enemies and extending jumps. Many of the hardest jumps in the game need the roll. In the 3DS version, you pull it off by tapping the run button, just like in the Super Nintendo games. No more shaking the device, which may seem like a simple change on paper, but it changes the very nature of the game for the better.

That isn’t the only fix either. In addition to having broken controls, the original version of Returns was difficult to the point of sadism. By the later stages of the game, Retro’s platformer made Dark Souls look like a leisurely stroll on a field of pillows. Now Donkey and his pal Diddy Kong, who in the single-player is less a partner than a health bar extension and jetpack for slowing down jumps (also essential late in the game), have three hearts instead of two. There are also more items available in Cranky Kong’s shops scattered between stages, ranging from health boosts to item-finding parrots, and even items to help save you from certain death. The original difficulty is available for masochists, but these changes make don’t make DKCR a cakewalk at all. Instead, they make it a very different, better-balanced, and more enjoyable game.

Tight As A Drum

These significant background changes make the gorgeous game that Retro made as fun as it should have been in the first place. The set up: A bunch of evil musical instruments with Tiki-mask faces have hypnotized the animals on the island into stealing all of Donkey Kong’s bananas. Having learned nothing from his lax security problems back in the original Donkey Kong Country, DK has to set out to bop these evil instrument dudes in the head along with the help of Diddy.

The game is broken into distinct themed worlds, each one containing a half dozen or more stages with a boss at the end. There’s a remarkable variety between these stages, and not just in cosmetic terms. The token “broken mine” area, complete with rushing mine cart stages, is properly distinct from the Beach and nightmarish Volcano world at the end. How each stage feels is very different, though. Getting chased by a giant screeching bat feels tangibly different than having to cling to moss-covered cliffs, which in turn feels different from dodging the harsh mechanics of a factory stage. Lesser platformers like New Super Mario Bros. 2 on the 3DS can start to feel rote by the end, but DKCR never gets old.

Donkey Kong Country Returns 3D goes the extra mile over its Wii predecessor, delivering an entire extra world with eight stages. Monster Games proves they have the chops to make levels as solid as Retro and Rare’s best design in this extra section, and while they recycle the themed settings of the other worlds, there are brand new obstacles in them.

As welcome as a whole new set of stages is, however, it’s a shame they weren’t just incorporated into the main campaign since they’re based on the existing worlds anyway. As it is, you have to beat the whole thing to get to them, which could frustrate returning players that have already climbed the Donkey Kong Returns mountain.

Those that have played the Wii version should absolutely play this one. While Nintendo’s previous home console will be remembered for killer platformers like Klonoa, New Super Mario Bros. Wii, Kirby’s Epic Yarn, and Kirby: Return to Dreamland, Donkey Kong Country Returns 3D is part of the Nintendo 3DS canon, not the Wii’s. In a year already brimming with killer Nintendo 3DS games, here’s another stellar release for Nintendo’s comeback kid.

Kirby’s Return to Dream Land Deluxe brings a Wii classic to Switch next year
Xenoblade Chronicles 3 is adding a very mechanical DLC hero
Splatoon 3 players: You need to download the Nintendo Switch Online app
Wolfenstein 3D and more classic Bethesda games join PC Game Pass
‘Wordle’ today, December 6: Answer, hints, and help for word of the day (#535)
Staff picks: Why Elden Ring is our 2022 game of the year
Why this year’s Game Awards has Geoff Keighley living in fear
Get this Lenovo gaming laptop with an RTX 3050 Ti for $550 today
Elden Ring’s first significant post-launch content is a PvP Colosseum
This Alienware gaming PC with an RTX 3080 Ti is $530 off right now
Fortnite: Oathbound Chests locations
Here’s why Portal RTX is the most demanding PC game I’ve ever tested
How to evolve Bramblin into Brambleghast in Pokémon Scarlet and Violet