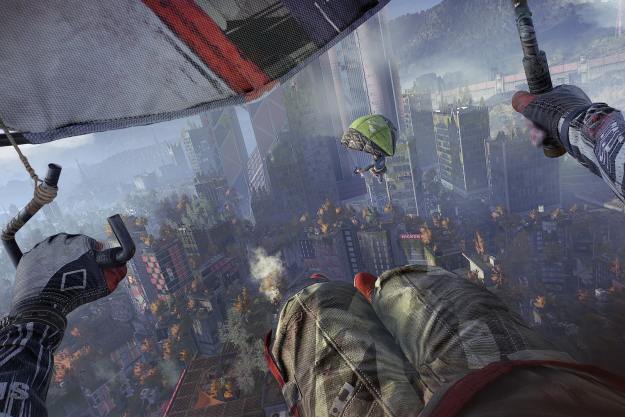 “With a slow plot and uninteresting characters, Dying Light 2: Stay Human's few redeeming qualities are what sets the franchise apart from other zombie games out there.”

Dying Light 2: Stay Human has been a long time coming, and the many years worth of effort put into it really show. Its world is a meticulously crafted parkour playground, somewhere that I, in my 30 some-odd hours of play, have enjoyed simply running through. This is the Dying Light franchise’s niche in the ever-growing sea of zombie games. Its movement and world are unmatched — and dropkicking a zombie off a roof is pretty fun, too.

But that’s the beginning and end of everything interesting in Dying Light, which makes Dying Light 2‘s narrative-based adventure all the more confusing. Instead of focusing on its free-running and zombie combat, the game delivers a muddy story, burdened with too many uninteresting characters, and puts it in the limelight.

Dying Light 2 is a wonderful game to play, but listening to its characters speak wears off faster than the soles of the main character’s shoes.

Picking up well after the original game, Dying Light 2 places players in the well-worn sneakers of Aiden Caldwell. He’s a Pilgrim, a wanderer between the few human settlements left in the world, who is searching for his long-lost sister. That brings him to the city of Villedor, a stand-in for Dying Light‘s Harran, albeit one that isn’t flirting with the apocalypse, but has been living in the aftermath of one for over a decade.

From its outset, Dying Light 2 is an expansion of everything from the original Dying Light. The city of Villedor is a grander, larger jungle gym than Harran was. Players can customize their character through an RPG leveling system, and modify weapons that have been taped or welded together from the ruins of the city. It also means the game’s story, which throws Aiden in the midst of a conflict between two factions, plays an even larger role.

While you may not care about the factions, and can even choose to play a very self-centered version of Aiden, working with them is how players actually change Villedor. By killing zombies and free-running up to the top of a water tower, switching on power for an area, or simply claiming a scrappy windmill, players can dole out territory to each faction. With that new land under their control, the Survivors set up traversal assistants, like ziplines or airbags that blast Aiden a couple of dozen feet up. Peacekeepers, on the other hand, focus on defensive modifications to the city, with their first being sporadically placed car bombs.

Giving these territories to each faction changes the city’s skyline. Survivors will transform rooftops into farms, while the Peacekeepers erect massive, blue-painted metal forts. The difference between the city at its start and when players reach the end of the game’s story is substantial, shifting entire areas from barren to brimming with life, whether it’s peaceful or militaristic.

But factions, and more importantly faction leaders, won’t care if you starve them of territories. The game’s story and gameplay are separated entirely, with the two never affecting each other. Instead, factions care about the choices players make during story missions. Giving one faction access to a radio antenna when you promised it to another, for instance, means you’re going to be taking a hard pivot in who gives you quests.

There are other instances where the choice you make doesn’t end up being the outcome. From time to time, Dying Light 2 decides that while you may have chosen something with the intention of helping one group or faction, it in fact, turns out the opposite. At multiple points, I made one choice, because the game made it seem like that’s what I wanted to do, and it ended up giving me the opposite. This continued through the entire game, and eventually resulted in me getting an ending I really didn’t want.

The difference between the city at its start and when players reach the end of the game’s story is substantial, shifting entire areas from barren to brimming with life, whether it’s peaceful or militaristic.

Despite this, I wasn’t too upset about the game’s ending. Rather, I was annoyed because of how well it tracked with the rest of Aiden’s experience. Dying Light 2‘s story is as ramshackle as some of the game’s abandoned buildings. Filled with plot holes and poorly written characters, there are very few peaks in excitement to be found in the game’s main story missions. By its end, I felt that the city of Villedor had more character than any of the game’s NPCs. It’s dilapidated, old, and bursting with environmental storytelling that far outdoes the mid-2000s soap opera playing out between Dying Light 2‘s characters. And it’s the one thing that I actually felt like I had control over during the game.

In between Dying Light 2‘s missions, players are free to run around Villedor, battling its inhabitants — both the undead and alive — and completing various activities. Let me get this out of the way first: Combat in Dying Light 2 is fairly simple. From the start of the game, you’ll be swinging weapons at enemies and parrying their attacks to perform a powerful kick where you launch off a stunned baddies’ back. Outside of that, combat doesn’t advance all too much over the course of the game.

With its RPG leveling system, players can unlock new parkour and strength abilities, with the former making it even easier to run around the city and the latter making it easier to kill anything that lives in the city. I ended up investing heavily in the parkour route, mainly because I couldn’t pass up an opportunity to run across walls.

You will have the most fun in Dying Light 2 dropkicking whatever you choose.

But there’s one vastly important skill in the strength tree that cannot be ignored: The dropkick. This move was a staple in the first Dying Light, and it continues to be here. It is, unironically, the best part of this game. You will have the most fun in Dying Light 2 dropkicking whatever you choose, from zombies to the bandits that decide to stand between you and a spiked wall. Techland could (and should) make a game centering around dropkicking things, with no story attached, because it would be fantastic.

Digging further into RPG territory, Dying Light 2 has a robust crafting and gear system, with different pieces of armor supporting different builds. If you’re a player who likes fighting with one-handed weapons, brawler armor will give you bonuses toward that. Tank players who want to use a two-handed weapon and shrug off damage like it’s nothing can find suitable armor for that build.

That equipment, along with crafting components, can be found across the world of Dying Light 2, but are most common in the game’s Dark Zones. Along with GRE Anomalies (mini-bosses that can only be fought at night) and a host of other abandoned sites, Dark Zones are why you should go out at night, when the city of Villedor becomes more dangerous. The undead roam the streets in greater numbers after sunset, and special infected, like Howlers, are more likely to start chase sequences where players have to run from a pack of Biters to the nearest safe zone.

Dark Zones and other nighttime activities balance that danger out with tons of rewards. Dark Zones are loaded with valuables, crafting materials, and Inhibitors, a new resource that lets players increase their overall health and stamina. GRE Anomalies reward players with the same. This is, again, a part of Dying Light that has been expanded in Dying Light 2, and the game’s better off for it. Nighttime isn’t something that players should avoid, but an opportunity for some of the game’s more exciting challenges.

Co-op is a great way to enhance the experience, although just a bit. Playing with friends can make the usually serious game a chaotic mess of multiple Aidens, all swinging their weapons at enemies. It’s not a perfect experience, though. During my time playing co-op with some of the game’s developers, I was repeatedly booted from the game, and enemies fell through the floor more than once, including a GRE Anomaly mini-boss.

Altogether, Dying Light 2 is a constantly fluctuating experience, due in part to the game’s lackluster story and eventually stale combat, as well as a good number of bugs. At multiple points during my time with Dying Light 2, I had to completely restart the game because of a glitch that would prevent NPCs from speaking to me at all.

I also came across issues where Aiden would grab onto nothing at all, enemies would freeze in place, and zombies wouldn’t attack me. By far the worst bug was when i would become softocked, although it should be patched by the time the game launches. All the same, these issues took even more away from the entire experience, leaving a layer of frustration behind.

Paired with a lackluster story filled with misleading choices and unbearable characters, Dying Light 2 is carried by its world and combat, but even then, both eventually get stale. Toward the end of the game, I didn’t feel like I had to unlock any more territories for either faction, and combat had become repetitive.

Paired with a lackluster story filled with misleading choices and unbearable characters, Dying Light 2 is carried by its world and combat, but even then, both eventually get stale.

While the beginning of my time with Dying Light 2 was fun and I enjoyed being introduced to its world and various systems, by the time I had become familiar with each, they were tiring. Ideas in Dying Light 2 are introduced and hardly ever evolve, making most systems, from combat to crafting, routine. Parkour does change with the addition of a paraglider and grappling hook, though neither makes the whole experience feel much different.

Dying Light 2: Stay Human is more of the same, a kind of love letter from Techland to the fans of the original Dying Light. Players can explore a bigger world with more zombies, take part in a bigger story, and change their character with more robust RPG mechanics. However, nothing in Dying Light 2 evolves the game’s formula in a meaningful way. Having taken me 30 hours to beat, I effectively saw everything the game had to offer after 15. Without a good narrative or endearing cast of characters, Dying Light 2‘s story does nothing but drag the game down. While playing the game itself starts off fun, it grinds to halt, with too few exciting parts, and actually completing the game ends up being a slog.

Fans of classic zombie games filled with gore and guts should give Back 4 Blood a try. It’s available on Xbox Game Pass and is best with some friends.

Dying Light 2 took me all of 30 hours to complete, although anyone rushing to get through the main story can beat it in 20. If you want to do everything in the game, unlock every skill, and complete every activity, it could take up to 100 hours (though Techland claims it can take up to 500).

Yes. Although its pacing slows down toward the end, Dying Light 2‘s main gameplay loop is fun enough for anyone to enjoy for at least a couple dozen hours.

Dying Light 2 was tested with a PlayStation 5 and an Insignia F30 4K Smart TV.