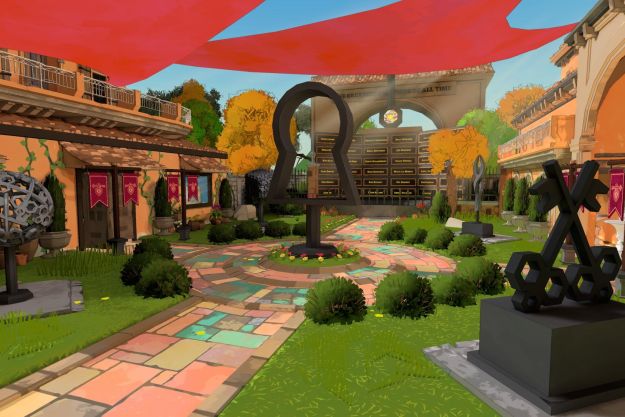 “Escape Academy delivers lovingly crafted puzzles that shine in co-op play, but it can't fully replicate the thrills of a real-life escape room.”

Sometimes, a no-brainer idea can turn into a deceptively tricky puzzle. That’s the case with Escape Academy, a new indie title that brings the idea of an escape room to your living room. It’s a grand-slam idea, one that the game achieves in many respects, but not without struggling to nail down a few solutions.

That’s not due to a lack of experience. Developed by Coin Crew Games, the first-person puzzle game was created by people who designed real-life escape rooms before the pandemic. Coin Crew wanted to properly honor that experience in video game form, replicating the satisfying joy that comes from solving an intricate puzzle box. Plenty of escape room fundamentals translate to a digital medium perfectly, though others don’t quite fit in as cleanly.

Escape Academy delivers expertly crafted puzzles that shine in a co-op setting, though it struggles to replicate the tension of a real escape room. With its limited number of levels and short run time, I’m already looking to sign myself up for a bigger, more complex sequel.

The art of escape

When the game begins, players are quickly enrolled in a university with the sole purpose of teaching students the art of escape. There’s a spy narrative through line to the game, which links its disparate puzzle rooms together, but it’s little more than a clever set dressing to create some fun tests. There are traces of creative worldbuilding, but they’re a little lost in the briefest of dialogue interstitials.

Each room is entirely distinct from any other, bringing a mix of inventive puzzles to match the theme.

Escape Academy excels where it counts: puzzle design. Throughout the game, players will solve just over a dozen puzzle rooms as they earn Pokémon-like badges. Each room is entirely distinct from any other, bringing a mix of inventive puzzles to match the theme. For instance, one room has me making a cup of tea. I’m dropped into a greenhouse with a stovetop in the center. Over the course of the level, I’m dropping tea leaves under a microscope and counting elements of its cells to deduce a lock combination. Another set piece plays out like an action movie, where I’m radioing numbers over to my professor as I watch her orchestrate a prison break via security monitors.

What’s especially nice is that no room feels obtuse or confusing, even the late game ones. I was never overwhelmed by having too many clues and objects I could interact with at one time. I’d usually have a few key items on hand at a time and some noticeable level design hints to direct my attention along. That especially makes it feel like a genuine escape room, as it’s not built to make you feel lost. If you see a piano, you know you’ll need to play it; it’s just a matter of figuring out what other puzzle will tell you the right keys to press. Even if you do get mixed up, a generous hint system offers clear nudges, making this much friendlier for players of all ages.

The first-person perspective works here too, letting players replicate the experience of anxiously pacing around a room. One especially small, but nice touch is the ability to pin a clue to the screen, making things like cypher puzzles much easier to complete without the need for a pen and paper. I wish there were more ways to write down clues in-game — my moleskin full of numbers and notes currently makes me look like a serial killer — but the puzzles are bite-sized enough that it’s generally easy to keep a short safe combination or shape pattern in mind.

It’s clear that the game was lovingly crafted by escape room experts as each level is packed with intuitive logic puzzles that are easy to love. It gets a little messier when it comes to replicating the high-stakes energy that real world escape rooms bring. In those scenarios, it’s a race against the clock with teams struggling to escape the room before they’re kicked out by the 25-year-old running the front desk.

Escape Academy isn’t quite able to capture that same manic spirit. Each level has a time limit and a clock menacingly counts down at the top of the screen, but it’s a placebo. If time runs out, there’s no consequence. The room just continues on as normal. The only downside is that you’ll get a slightly worse grade on the report card you receive at the end of every level.

There’s no good reason to pop back into a level aside from trying it in co-op.

Those grades aren’t exactly a strong incentive to do better. There are no leaderboards where players can compare scores or even room-clearing times. The lack of friends list competition makes sense, because once you’ve solved a room, there’s not much challenge left. You can easily replay it armed with every puzzle answer and get an A+ in minutes. There’s no good reason to pop back into a level aside from trying it in co-op.

That’s where the digital and physical escape room experiences come in conflict with one another. You’re only meant to do a real one once. The threat of a failure makes an escape room a thrilling night out, but failure isn’t as meaningful in a game. You can always reset or try again. In one room, I had to cut the right wires on a bomb. If I messed up, my only consequence was that a few minutes would tick off the clock. I could screw up as much as I liked until I eventually snipped the right wire. What was the game going to do, tell me I couldn’t try again unless I paid for another attempt?

To its credit, Escape Academy finds other clever ways to bring a sense of tension. Real escape rooms can induce light panic, but it’s always a safe environment with low stakes. Here, players are thrown into a burning library or a series of slowly flooding rooms. Those scenarios make the race to escape feel more exciting, though that lack of a meaningful fail consequence proves to be a real challenge.

I wouldn’t mind that as much if there was a little more to the package. Escape Academy only features around a dozen rooms, most of which I breezed through before I hit the suggested time limit. It only took me around three hours to complete it. An epilogue would allow me to pop back in and replay old rooms at any time, but there’s not much fun in that.

If you’re going to play Escape Academy, I highly recommend doing so with a friend. The entire story can be completed with two players in split-screen mode, and it’s where the game truly shines. While I mostly played the game solo, my favorite experience with it came from co-op. It’s the moment where the game felt the most delightfully chaotic as my puzzle buddy and I bounced around a room shouting clues at one another and trading notes. It joins the pantheon of top-tier “couples games” right next to It Takes Two.

Every little design detail stands out with two players. The ability to pin a clue to the screen works especially well in a split-screen setting where one player can hold up a note while the other solves a puzzle. There’s usually at least two tasks that can be completed at any given time in a level, which lets players divide and conquer without straying too far from each other. The more straightforward puzzle design also makes it an excellent option for parents looking to play something with their kid.

While Escape Academy can’t quite capture every nuance of the escape room experience, it nails the social component. It’s a game that’s best enjoyed as a bonding exercise. It’s an excuse to invite a friend over and chat after, much like an escape room night out inevitably ends in a bar. The short and sweet nature of it makes it a perfect complement to a social hangout session.

Just don’t play it solo first or else you risk becoming the obnoxious friend who keeps impatiently rushing your pal through puzzles.

Escape Academy is an endearing puzzle game that just wants to share the unique pleasure of escape rooms with everyone. Each well-designed level brings a set of clever logic puzzles that are always satisfying to solve, especially with a pal. It has a harder time bringing players a meaningful sense of failure, as the meaningless time limits suck the tension out of the room. Despite its struggles to nail down the energy of real-world escape rooms, it’s one of the most fun ways you can spend a Saturday gaming night this summer.

The Room series delivers incredibly strong puzzle box gameplay. If you’re looking for a longer, more involved co-op puzzle game, It Takes Two is the top of its class.

It took me less than three hours to complete the game, though I’d done a few rooms previously during demos. Even so, playthroughs will top out around four hours with no incentive for replays.

Yes. Even if it’s short and imperfect, I had a wonderful time solving every room. Grab a friend and make a night out of it.

Escape Academy was tested on PC and Steam Deck.

Topics
Xbox Game Pass new games: what’s new and what’s leaving in February 2023
Redfall’s May 2 release date revealed during Developer_Direct
Goldeneye 007 comes to Game Pass and Nintendo Switch later this week
Xbox and Bethesda’s Developer_Direct: how to watch and what to expect
Best Gaming PC Deals: Save on RTX 3070, 3080, 3090 PCs
The best video game remakes reinvent the classics, they don’t just revisit them
Best Buy will give you a $10 to pre-order Hogwarts Legacy today
Save $620 on this Lenovo gaming laptop with an RTX 3070
AMD vs. Intel: which wins in 2023?
Forspoken settings: change these settings for a better experience
Add 2TB of storage to your PS5 with an SSD and save $70 with this deal
Fall Out Boy concert in Fortnite: start time, island code, and more
Marvel Snap is dangerously close to becoming a pay-to-win game