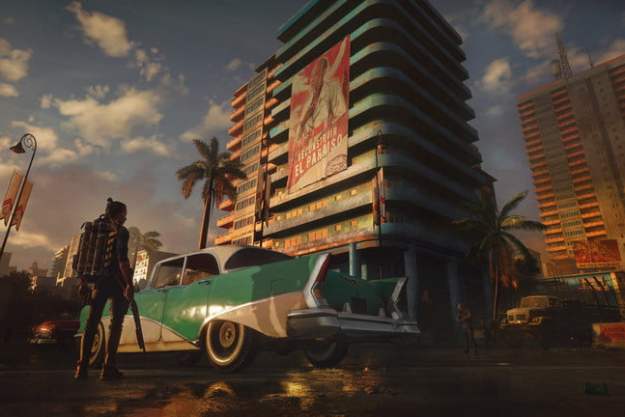 “Far Cry 6 could be the most interesting and complex game Ubisoft has made in recent times.”

This review was originally published on Digital Trends Español by Raúl Estrada and translated into English.

Within the first few hours of Far Cry 6, there’s a moment that sets the tone of the game in terms of narrative and playability: A mission in which the goal is to destroy a tobacco plantation. In general, the task is simple: Set fire to the growing areas and destroy tanks with chemicals, while facing waves of enemies that arrive steadily until the destruction meter is filled.

This mission design is a classic in Ubisoft games. However, in Far Cry 6, the striking detail is that, while the plantation is burning, a Caribbean and Spanish version of the song Bella Ciao plays in the background. This changes the rhythm and even adds more instruments as the chaos unleashes. Without music, the mission would be like any other. With the melody, it becomes a great moment in the game’s campaign.

Far Cry 6 is no stranger to the Ubisoft formula present in all of its open-world games. But to its credit, it disguises the formula in the best way possible, so that the game doesn’t feel like an endless to-do list. The mix between mechanics and mission design is more organic, and this has a lot to do with the setting. The island of Yara has space to accommodate urban environments, rural areas, mountains, and archipelagos. Overall, it’s more diverse than the flat, uniform map of previous Far Cry games.

Ubisoft has a signature with its open-world games and Far Cry 6 is no exception. The map is divided into zones, where each one is controlled by a subordinate of the main villain. The objective is to take control of these territories by completing missions to defeat the boss of that zone and thus close the siege in around the main villain.

What changes in Far Cry 6, in comparison to the previous titles in the saga, is not the design as such, but the perception of what is being done. In this case, the aim is to start a Yaran revolution, and to do so one has to recruit allies who have tried to move things on their own or who have become disenchanted and are no longer interested in taking back the country. As a good open-world game protagonist, Dani Rojas spends hours helping other people until he convinces them to join the cause.

Now, the interesting thing is that the concept of clearing bases or capturing towers to unlock activities, a common mechanism in many Ubisoft games, disappears almost completely. That does not mean that at certain times you won’t have to do it, but it is not the tone of the game. The “opening” of the map occurs simply by walking through it and thus new places of interest appear, as well as enemy settlements through which you can pass in peace without the need to eliminate them all.

Far Cry 6‘s campaign has a good pace and alternates flat missions with more explosive and spectacular moments. By design, some of these tasks force you to go face-to-face against the enemy, but the rest of the time you can choose stealth, as the mechanics are well implemented to accommodate different play styles. This includes many weapons and forms of customization that come in handy for the trickier moments.

On the other hand, there are also urban environments, a novelty for the saga. In Far Cry 6, there are cities with several levels, and it is common to find yourself parkouring between buildings and structures. To simplify this, Ubisoft added some new elements and mechanics that generally work very well and allow you to move around rooftops and platforms in a very similar style to Dying Light. The urban environments give a new dimension and refresh the more classic Far Cry emergent playability.

In terms of mission design and mechanics, this title is the sum of Ubisoft’s years of experience in open-world games. The design is not revolutionary or radically changed, but it is much better disguised than before. As a result, Far Cry 6 is a game with a less predictable and rigid feeling, in which the hours fly by.

Far Cry 6 is set in Yara, a fictional country made up of several islands in the middle of the Caribbean. This nation is ruled by a president/dictator named Anton Castillo (Giancarlo Esposito), elected by a questionable popular vote, who has been in power for several decades.

Yara is a world power in medicine, and it seeks to develop a cure for cancer from its tobacco plants. However, the cost of these advances has been an impoverished population divided between the false and true Yarans, according to Castillo’s classification. False Yaranos are considered outcasts and forced to work as slaves on Viviro plantations, the resultant element of modified tobacco plantations.

Anton Castillo’s goal is to return Yara to its former glory, while the nation has to cope as best it can with the blockade imposed by the international community and particularly by a superpower like the United States.

Ubisoft has insisted that its games are not political (a point that its narrative director later pushed back on). However, in Far Cry 6, it recognizes that these types of stories cannot be isolated from the political discussion, even less so when this title is not at all subtle with its mise-en-scene. Yara is a fictionalized version of Cuba in which there are too many elements that refer to the history of this Caribbean island, such as revolutions that last for decades or cities that seem to have been stuck in time as a result of the blockades.

Still, there are elements of Far Cry 6‘s narrative that are more complex. In the big picture, Yara is Cuba, but when zooming in on more specific situations, sociopolitical elements appear that are problematic not only in dictatorships but globally. For instance, military control in cities with curfews, extreme nationalism, or discrimination against minorities;  themes that become visible in the game and that do not remain only in stilted references.

In that sense, Far Cry 6 is more honest than Far Cry 5, as it is less subtle in saying what it has to say. In the previous title, the insinuations about what was happening in the rural and protestant U.S remained just that. Far Cry 6, on the other hand, is not the most explicit game of all, but it has no problem showing the consequences of fascism and nationalism.

The setting of Far Cry 6 is authentic in general, although there are certain details that Spanish speakers will notice. The most obvious are the names of some places. Also, the Spanish that is seen throughout the island seems to have been conceived first in English and then translated almost literally into Spanish.

Far Cry 6 is more honest than Far Cry 5, as it is less subtle in saying what it has to say.

Something similar happens with the original voice actors, who mix English with a Latin accent with Spanish words that are not pronounced natively, which is immediately noticeable. So, one wonders how a company like Ubisoft, with all the resources available to create games that involve thousands of people, falls short in details like these.

It’s not that all of Yara’s Spanish is imperfect, but it is common to find phrases without much sense in road signs or place names that seem like a literal translation from English. In the long run, this becomes a minor and curious issue that does not tarnish the atmosphere, although the use of language is the least authentic of the environments created for the game.

That said, the Spanish dubbing of the voices is generally good and is perhaps the best way to play Far Cry 6, which is complemented very well with a first-class soundtrack that makes the experience interesting and striking from the audiovisual point of view.

A breakthrough in every aspect

Perhaps time will change the perspective on a product like this, but it is not risky to say that Far Cry 6 is one of the best and more interesting in the series. It is important to emphasize that the game does not reinvent a formula. However, the merit lies in making the whole adventure flow organically, leaving elements such as statistics, activity lists, or experience levels out of the way. These elements are present, but in a secondary place, and appear only at specific moments, for example, when Anton Castillo’s regime realizes that the revolution is approaching and sends more soldiers to the streets (and increases the difficulty level of each zone).

The cast of the entire adventure deserves special mention. The villain indeed is the one who gets all the attention — Giancarlo Esposito’s face is perfectly captured — but the rest of the characters are more diverse than stereotypical. The script is simple and not at all far-fetched. It manages to maintain the interest factor until the end, mostly because it makes us want to know what the real intentions of the dictator are.

Far Cry 6 is an outstanding game because it has a great design of mechanics and missions, its setting is authentic even with localization flaws, and the game does not drag on too long or become repetitive; on the contrary, just walking around the island and exploring the public and hidden routes is a satisfying activity.

In addition to the above, this title presents more complex themes in the right way. At times it is daring, although at other instances it can be timid. But the messages are there and are not hidden, which is a breakthrough in an industry that tends to be too conservative with global products like this one.

Japan suffers horrendous phone network outage for most of the weekend