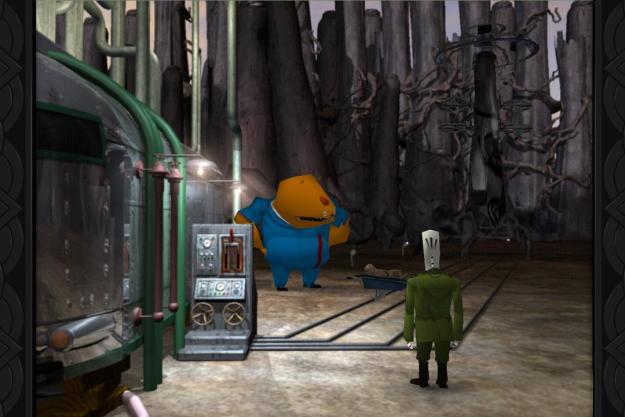 “Grim Fandango invites you to find meaning in just one life. It just so happens that you’re already dead when it starts.”

Video games encourage you to get a life. “Here!” say video games, holding the door wide open. “Come on in where it’s warm. Try on whatever you like, see how your choices might change when your life is a test bed. Come see what works.” So we wander Grand Theft Auto as a destroyer, raise a family in Fable’s Albion, ride the romanticism of self-sacrifice in Final Fantasy, and play at banditry in Borderlands. Video games invite us to get not just one life, but many.

Grim Fandango does not. Newly re-mastered and available for the first time in 16 years, Tim Schafer and LucasArts’ adventure game remains indelibly unique and powerful in the gaming canon. Fantastical, strange, and deeply funny, Fandango distinguishes itself by feeling eerily like living a real life full of confusion, false starts, inertia, and love. Grim Fandango invites you to find meaning in just one, vaguely familiar life. It just so happens that you’re already dead when it starts.

Grim Fandango invites you to find meaning in just one life. It just so happens that you’re already dead when it starts.

Manuel Calavera, like all our dearly departed, is doing the very best he can in the afterlife. Working as a travel agent for newly dead souls, Manny is the disappointing reality of the grim reaper waiting for you on the other side of the veil. He’s just a working stiff trying to get by, which is even more difficult when you die and turn into a shiny skeleton. Rather than eternal reward, damnation, or just good old rest, the dead in Grim Fandango have to make a pilgrimage to reach their ultimate reward.

New arrivals are scurried about by folks like Manny, who check in with a bureaucracy (think the DMV for the deceased) to see if their good deeds in life equate to good credit in the hereafter. If you’ve got the credit, you can ride a bullet train all the way to everlasting peace and Manny gets a hot commission, putting him one step closer to freedom from purgatory.

Being Manny feels surprisingly natural thanks to Fandango’s impeccable execution, which starts with newly added three-dimensional movement, an alternative the original’s stiff tank-style controls. The Mexican-meets-Art-Deco inspiration pops off the screen whether you’re playing on PS Vita or PlayStation 4. Even the original character models, which can be switched to touched up versions on the fly in this remaster, look appealingly bright and detailed. They’re actually easier to see than the new versions in many of the game’s darker scenes.

The landscape, from forests of bone to slinky dens of inequity in port town Rubacava, pack life into the land of the dead with flourishes of color and detail. Lost souls bet on cat races and obese, kind-hearted demons appear suddenly to serve single functions, like waiting tables or driving fast. The script and voice work give dimension and weight to Manny, Glottis the demon, coat check Lupe, the rival Domino, and other inhabitants of the afterlife. Never caricatures or simple archetypes, Fandango’s cast is filled out by people.

These parts are merely the body of Grim Fandango, though. Soul comes from how Manny’s journey across the land of the dead unfolds. Long delayed, Manny searches for the love that got away. He’s also wrapped up in uncovering the miserable conspiracy that keeps folks trapped in purgatory. All while contending with very terrestrial challenges.

Manny’s job gets him down, new friends and new opportunities keep him stuck in certain places longer than he expected to be there. It’s grounded. Sure, there’s also a skeleton bridge that must be crossed without getting killed by fiery demon beavers, but most of the time Grim Fandango puts you in scenarios that are all too emotionally real. Figuring out the fantastical solutions to those problems gives the game its final spice.

Wrought in the mold of classic point-and-click adventures, you have to collect items in the environment and use them in strange ways to move forward. Grim Fandango exists in an odd space, even among other adventure games. It’s far more complex than modern descendants like The Walking Dead, but not nearly as arcane as the likes of LucasArts labelmate Maniac Mansion.

Halfway through the game, though, the puzzles expand to the point that you’re manipulating entire towns, exploiting relationships, and starting workers revolutions just to get through. Fandango never resorts to unnatural thinking. Need a book some beatniks are using? Think about how to impress beatniks with what you’ve got on you and what you can do in the environment.

Logic and careful attention to your surroundings are enough to carry you through Fandango, but the process can be laborious. Sometimes you visit an area and miss an item in the background or don’t realize you can walk through a door leading somewhere else. It’s not frustrating, though. Fandango’s steep challenge and complete lack of handholding reinforce the grounded, oddly relatable story. Sometimes life leaves you stumped and lonely for the people you most want to be with. Every step forward for Manny feels earned and true and familiar.

Except for the occasional stumbles. Grim Fandango does unfortunately have a few puzzles that are infuriatingly unclear. The welcome and insightful commentary track from the developers — provided the track is on, you can just click the left trigger and listen to stories from much of the original crew — even acknowledges that some sections just don’t work particularly well, like a seemingly endless forest maze early on. Even once you have the item you think you need, the game does a poor job visually implying how you’re supposed to use it.

Flubs like these are scarce, though. More often than not, the solution to a problem is helping Manny smooth talk his way through a chatty friend’s jabbering or finding leverage on a criminal.

Grim Fandango is a comedy, a romance, an adventure, and sometimes a farce, but more than anything, it’s alive. Scythe-wielding skeleton, ship captain, club owner, down on his luck salesman; Manny Calavera is a lot of things, but he feels like a person. Playing Grim Fandango doesn’t invite you to try on a different life; it mirrors one so affectingly like your own that even its strangest corners feel real.

Topics
Best PS5 game deals for November: Hours of AAA entertainment from $17
Best video game deals for November 2022
The best PS4 games you can play right now
The best FPS games for PS5
The best iPhone games to play in December 2022: Marvel Snap and more
The best Android games available right now (December 2022)
Destiny 2: Where is Xur for the weekend of December 2
Warzone 2.0 and DMZ contract guide: every contract and reward explained
Trust me: Play The Callisto Protocol on its easiest difficulty setting
The most innovative gaming tech of 2022
Monster Hunter Rise won’t support cross-progression between PS4 and PS5
The most innovative tech products of 2022
How to interrogate enemies in Warzone 2.0