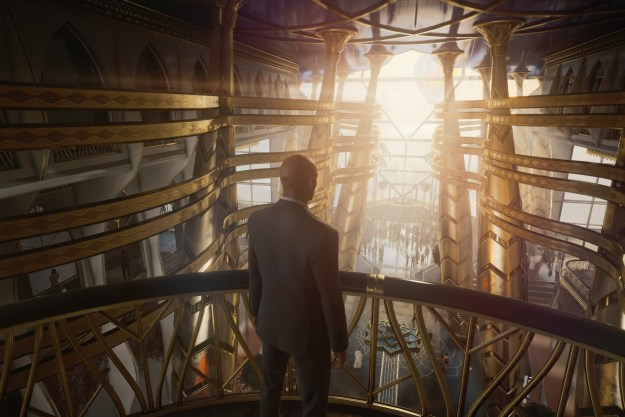 The “world of assassination” label has been the tagline of the current Hitman games starting with IO Interactive’s Hitman in 2016. Hitman 3 is the final piece of that assassination puzzle, offering a satisfying conclusion to the trilogy with its grandest locations yet and the ability to experience any of the three games’ offerings.

However, while Hitman 3 provides some of the series’ most intricate scenarios, there are still a few features it lacks that prevent it from being the definitive stealth experience that it should be.

Before diving in, I want to make it clear that I initially requested a PlayStation code in order the review the game, specifically for its VR component. PlayStation review codes were ultimately not made available to the press before the review embargo, and therefore we were not able to get hands on with the VR edition of Hitman 3. With the recent precedent of console codes not being made available before review embargoes lift having disastrous consequences, Digital Trends wants to offer full transparency to our readers as there’s no way to know how well the PSVR component works at launch.

Hitman 3’s locations are the star of the show

In the very brief campaign for Hitman 3, the wolves are closing in on Agent 47 as he and a handful of other operatives turn against their former employer, the International Control Agency, which has been infested by the series’ antagonists Providence. The plot is standard espionage fare that is dripping in tropes that define the genre. It’s an engaging plot, but a familiar one to be sure.

None of the story elements particularly matter, however, as they mainly serve to transport Agent 47 from one incredibly textured locale to the next. While playing the game, and as I will bring up in my review in other contexts, I discovered its closest analog to be the Mission Impossible film franchise, with its most direct comparison occurring in its opening moments.

Hitman 3 provides the most intricate scenarios yet.

Agent 47 HALO jumps from a plane like Ethan Hunt in Mission Impossible: Fallout and lands on the top of the world’s tallest building in Dubai, the key set piece in the fourth Mission Impossible movie, Ghost Protocol. The inaugural assignment sets the stage for what players should expect for the rest of the game — immaculately designed playgrounds that somehow offer countless variety in a relatively condensed space.

The six incredibly varied locations are undoubtedly the series’ best, which is ultimately what Hitman 3 needed to nail in order to make this the best entry in the trilogy. They’re all of such a high quality that it’s hard to pick a favorite, although I’m partial to an underground nightclub in Berlin, which forces the player to pay extra close attention due to the fact that they’ll be unsure of who in the crowd their targets are.

One of the locations in the back half starts in neon-drenched city streets, and transforms into something else entirely as Agent 47 moves from one mark to the next. The levels beg to be replayed — to find all the secret passageways and hidden items tucked away in their darkest corners. The addition of unlockable shortcuts further enhances the replay value of the missions, awarding sensible alternative routes to those who spend the time hunting for them.

The game is incredibly funny

The second thing Hitman has in common with Mission Impossible is its humor. While both are incredible action spectacles, they’d be nothing without their meta observations of how absurd their worlds are. The designers and writers at IO Interactive are wise enough to understand how hilarious some of the moments in its games are, and Hitman 3 plays into that absurdity every chance it gets.

The levels beg to be replayed.

Whether its Agent 47 flinging a sword across a room to impale a guard who is on the brink of recognizing him, or the titular hitman dumping an unconscious body into a vat of crushed grapes (an “eliminate” indicator appears, making it clear that the dazed target will drown in the mashed fruit), every moment of the game has a humorous hook.

The more the player accepts that this is an absurd, melodramatic action game bordering on parody, the more fun they’ll have with it. Often I found myself stalking a target through their movement cycles, taking detailed mental notes of where they stop, who they’re with, and what they’re doing, in an attempt to plan a perfect assassination. Those schemes would frequently fall apart the moment I saw an opening where a target’s back was turned in a secluded corner, and I found myself haphazardly dragging their lifeless body around a room, knowing that armed security would make a patrol through the area in a matter of seconds, with no container to stash the corpse in sight. These are the moments that make Hitman 3 shine.

There should be further, customizable difficulties

After finding the opening mission to be too easy on the “normal” setting, I bumped it up to “master” difficulty. This raises security’s awareness, makes Agent 47 more vulnerable, turns off mission indicators that direct the player to the next clue, and disables auto saving, offering the player a single manual save per mission to strategically activate when they think the moment is right.

The comedic moments are what make Hitman 3 shine.

I believe this to be the best way to experience Hitman 3, although I don’t think it’s pushed far enough. At the start of the second mission in the game, Agent 47 is told that the target knows that he is coming. When I was spotted incapacitating a guard, I darted through hidden corridors to evade the notified security. However, once enough time had passed, like any other game, it became business as usual for the non playable characters, returning to their routine as if nothing had happened.

In a later mission, after executing my target’s personal bodyguard from a distance, I was happy to see that they were taken to a secure, windowless room with armed detail surrounding it, ready to shoot anything that moved. I thought that this was the layer of difficulty I had been looking for, but after a few minutes, they returned to their cycles, the target resuming their previous motions and now with no bodyguard in the way.

A final level even states in its briefing that Agent 47 needs to take out an additional target, as they are too attentive to be oblivious to the main target’s assassination. After incapacitating the primary mark and stuffing him in a cupboard, the supposedly incredibly observant second target was none the wiser. it made me feel a little guilty that the level required me to kill her, despite her clearly not being the threat I was told she was.

A game with the tagline “world of assassination” that has in-depth customization options on how to plan out its missions by choosing different gear, alternate starting locations, and contraband stashed inside of the level, I feel like that level of personalization could increase its difficulty.

Have you taken out someone that other characters would notice if they were missing? Toggle on guards searching for them, even opening cabinets and stashes used for hiding bodies that they otherwise don’t open in the current situation. Perhaps the player could enable a timer that kicks in the moment you are spotted, which counts down an evacuation process for the target and their security, giving you a limited window to complete your objective. Little customizable A.I. enhancements of that type would go a long way in extending this game’s replay value, which is the main thrust of the game.

Hitman 3 is a great swan song to a fun trilogy of games, held up by its intricate locations and humorous gameplay. Hopefully future updates bring some important additions that extend its replay value and turn it into the ultimate stealth game it is within spitting distance of being.

Hitman and Hitman 2 are still great games, but their set pieces don’t touch what Hitman 3 has to offer. I fully recommend owning all three games, as you can access them all via Hitman 3, and replay any of their locations from one title.

The campaign can take a few hours to over a dozen hours depending on how intense the players are. With how replayable its levels are, and how much variety there is on offer within the scenarios, there’s tens of hours of content.

Yes. Hitman 3 is a fun sandbox that most gamers will find something enjoyable inside of.