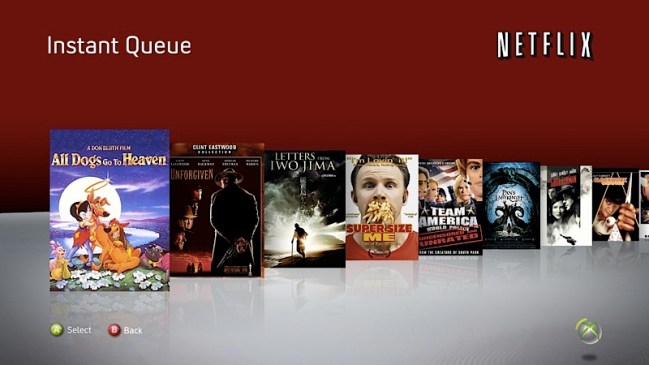 If you can remember that far back, Microsoft promised Kinect support for Netflix on the Xbox during its keynote at CES. Now, it’s delivering. At the MIX event, the company announced that starting today, Netflix is integrated with Kinect and “with just the wave of their hand” users can sift and choose the movie or show of their choice.

In an effort to make the remote obsolete, the update will come at you next time you power up your Xbox 360 and choose Netflix. Xbox Live’s director of programming Larry Hyrb explains further: “That means controller-free navigation of thousands of movies and TV show [sic], allowing you to use just the sound of your voice or wave of your hand to control your favorite Netflix content. You’ll be able to select movies and TV shows recommended for you by Netflix, as well as play, pause, fast forward and rewind using gesture or voice.”

While that’s all very exciting, we knew it was coming for awhile now. So for all those unimpressed by what you saw as an eventual upgrade, Microsoft has a surprise in store. Hyrb boasts that Kinect support for Netflix on Xbox Live will also feature a new personalized recommendation system. The new channel will also forsake the controller and “uses a smart engine to suggest movies or TV shows based on your viewing habits and instant queue.”

So get ready for some awesome movie-choosing experiences, and a slew of hilarious videos showing ill attempts at motion-controlled Netflix. Microsoft sent us the full press release, check it out for all the intricate details coming to your Xbox… today.

“By integrating Kinect into the Netflix experience on Xbox LIVE, we’re continuing to transform the way people enjoy their favorite entertainment in the living room,” said Pete Thompson, General Manager, Xbox LIVE. “Since its launch, Netflix has always been one of the most popular services on Xbox LIVE, so we are excited to deliver a brand new way to control this experience in a way that can’t be found anywhere else.”

The Netflix application currently offers Xbox LIVE Gold members who are also Netflix members in the United States and Canada the ability to instantly watch TV shows and movies streaming from Netflix, which contains thousands of TV shows and movies from the major networks and studios, and independent and international producers.   Now, through the power of Kinect, your voice is the remote control – just say “Xbox play” to start movie night.

“Netflix continues to provide its more than 20 million members in the U.S. and Canada unparalleled convenience, selection and value,” said Netflix Vice President of Corporate Communications Steve Swasey. “With thousands and thousands of titles available to watch instantly, paired with the innovation of Kinect and the power of Xbox LIVE, this is an entirely new way for Netflix members to enjoy instantly watching TV shows and movies streaming from Netflix on their TVs.”

With Xbox LIVE, take your Xbox 360 online and browse the full Netflix library to find the movie or TV show that you want, or launch Netflix from the Kinect Hub and select from one of the recommended titles using your voice and hand gestures as the remote control. Even play, pause, fast forward and rewind what you’re watching with the wave of your hand or the sound of your voice.

With a growing community of 30 million active members on Xbox LIVE spending more than one billion hours a month online enjoying entertainment, Xbox 360 is the only place to experience controller-free entertainment with tens of thousands of movies and TV shows in 1080p streaming, thousands of live and on-demand sports, and millions of songs – all on the biggest screen in your home shared with the people you care about most wherever they are.

Topics
Best Gaming PC Deals: Save on RTX 3070, 3080, 3090 PCs
Here’s what E3 2023 could look like without Sony, Nintendo, and Microsoft
The best upcoming Xbox Series X games: 2023 and beyond
Samsung’s 49-inch Odyssey G9 gaming monitor is $600 off today
WWE 2K23 improves the wrestling sim with subtle tweaks and a bit of chaos
Meta Quest Pro VR headset is $400 off (and save on Meta Quest 2)
How to change classes in Fire Emblem Engage
Fortnite: How to collect Dragon Balls on Adventure Island
How to get all Emblems in Fire Emblem Engage
Fire Emblem Engage bond levels: how to get max Bond Levels fast
Marvel Snap Battle Mode: How to play Marvel Snap with friends
The best video game remakes reinvent the classics, they don’t just revisit them
Best Buy will give you a $10 to pre-order Hogwarts Legacy today