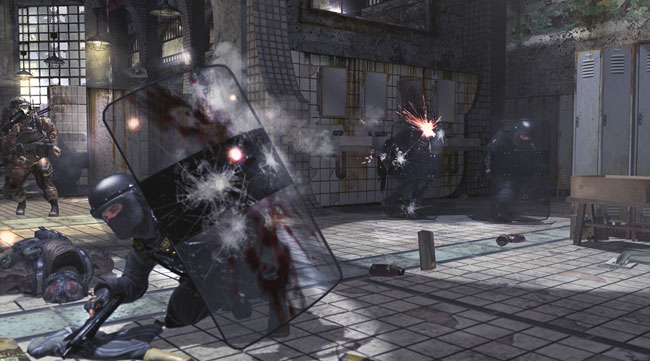 The game, which has an “M” rating for mature audiences, comes out next month in what its publisher hopes may be the most lucrative launch in the history of entertainment, not just for games but counting music and movies too.

In a statement, game publisher Activision Blizzard Inc. said Wednesday the footage was taken illegally and is not representative of the game’s overall experience. Instead, the scene is designed to evoke the “atrocities of terrorism,” Activision said in an e-mailed statement.

The game follows players as they “face off against a terrorist threat dedicated to bringing the world to the brink of collapse,” the Santa Monica, Calif. company said. This includes a plot line in which the player infiltrates a Russian villain’s inner circle to defeat him. Presumably the airport attack is one of the scenes in which the player acts as part of the villain’s group.

In an interview before the footage was leaked, Vince Zampella, head of the game’s developer, Infinity Ward, said studio intended for its game to startle players.

Gamers are warned that the scene may be disturbing, and they can choose not to play through the part. It’s unclear, though, how many gamers will heed the warning for fear of missing part of the game’s intricate story. Activision says the game is designed so the part can be skipped over without losing any of the story.

The game’s makers said before the leak that they strive for “real world” authenticity in weapon types, military tactics and locations, but the plot is more James Bond action movie than ripped-from-the-headlines.

“As far as the story goes, Makarov is this super villain and you are this task force,” Infinity Ward creative strategist Robert Bowling said in a recent interview. “And it’s good versus evil. So we really like to be cinematic but also not let that ruin the fun.”

Infinity Ward hasn’t shied away from disturbing imagery in the past. “Call of Duty 4: Modern Warfare” begins with a character being driven through an occupied city, dragged out of the car, tied to a pole and then executed — all from the victim’s point of view. The player controls other characters throughout that game, including one who perishes in a nuclear blast.

But what’s different in the upcoming game is that people can play from the perspective of someone inside a terrorist group, similar to how gamers can play criminal in the “Grand Theft Auto” titles. The gamer can play a CIA agent who infiltrates a rogue group and appears to be a double agent.

“It’s a very cinematic experience,” Bowling said of “Modern Warfare 2” in the interview. “You get to play from multiple perspectives and get a broader picture of what this conflict is, and see that it’s much more than just winning a war with a bullet.”