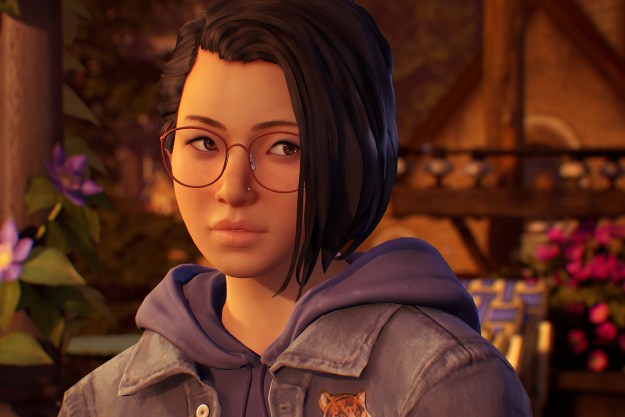 “Heartfelt and poignant, the only thing Life is Strange: True Colors trips over is its own words.”

If you’re looking for a story about mental health, finding one is as easy as logging onto Twitter and scrolling for a bit. Media, regardless of its format, now has some method of representing the wide swath of mental health issues. The issue of widespread depression or anxiety has become accepted, and is now represented through the characters in the games we play and shows we watch. At some point, a lot of us realized that, internally, something isn’t right, something’s not good.

Life is Strange: True Colors centers around that notion — that we are all, in our own unique way, broken or wrong. However, the story it tells isn’t simply about coping with daily life. That’s not a healthy way to live anyway. It’s about embracing those imperfections, tackling them head-on, and in some cases fighting to make sure life is what it should be.

That message comes to life through the game’s wonderful cast of characters, each with their own experiences and trauma. It’s almost impossible to complete Life is Strange: True Colors without relating to either Alex or one of her friends. Even with staggered story pacing and sometimes off-putting dialogue, the game managed to connect to me in a way not many have before.

In someone else’s shoes

Life is Strange: True Colors puts players in the shoes of Alex Chen, a woman who’s seemingly been through it all. A large part of her life was spent in the foster care system, which I don’t know about first-hand, but am all too familiar with due to a close friend’s experiences. By looking at her phone, players can see that even the few social relationships she’s managed to grow during her time in the system didn’t pan out. One ends with Alex ghosting a boy who starts to expect sex from her after a few hookups, another ends because Alex seemingly “freaked out.”

That freak-out was caused by Alex’s latent power, which isn’t anything as spectacular as flying or shooting laser beams. Instead, she’s a strange mix between a telepath and an empath (a telempath, if you will). She can see how people feel, visualized through colorful auras that appear around their bodies. When someone feels something, she can tap into it and understand the reasoning behind their emotions. Overall, it’s a powerful tool, one that lets her, along with players, get to the core of any character’s motivation. If someone is acting out of fear or rage, Alex can tell and dredge that deep-seated emotion to the surface.

However, when she’s really reaching into someone’s emotions, Alex’s powers can take her somewhere else. Instead of simply seeing how someone feels — albeit at a deeper level than most — she can see the world through their eyes, filtered by their emotions. At times, this experience is whimsical, bringing Alex into a Dungeons & Dragons-esque world imagined by a child. Other experiences aren’t as pleasant, but nonetheless poignant. One of these sections has Alex looking through the terrified eyes of a woman slowly losing her memory to a “condition,” through the lens of her fear of eventually not remembering basic things, like the face of her own granddaughter. These moments ended up hitting close to home for me as terrifyingly brilliant representations of the fear, rage, and anxiety I’ve felt through my own life.

At times, this experience is whimsical, bringing Alex into a Dungeons & Dragons-esque world imagined by a child. Other experiences aren’t as pleasant, but nonetheless poignant.

The negative emotions players experience throughout Life is Strange: True Colors are equally balanced by moments of tenderness and genuine joy. The game starts with Alex arriving in the town of Haven Springs, Colorado, to move in with her brother, Gabe. The first day they’re together is one wholesome moment after another, with the quiet, reserved shell that Alex has built up over years slowly chipping away as she’s reintroduced to her brother and the tightknit found family he’s built in the small town.

That perfect day ends with Gabe’s death, an event that puts the rest of the game’s plot into motion. Alex and her two best friends, Steph (who makes a return from Life is Strange: Before The Storm) and Ryan, begin investigating a mining company that’s been in the town and set off a blast that caused Gabe’s death. However, this tale of corporate espionage and intrigue largely falls into the background during four of the game’s five chapters. There are moments when you’ll focus directly on this plot, but for most of the game, the spotlight is on Alex and her slow but sure acclimation to a place that’s safe to call home.

This ends up making for a strange imbalance in a story that I generally enjoyed and ended up connecting with. Alex’s fight against the mining company, Typhon, feels like it should take center stage at all times. However, it instead provides an ominous backdrop for Alex’s own story of personal betterment, and how she comes to terms with her new role in Haven Springs as a person who recognizes themselves as broken but feels the need to fix others.

For a majority of the game, players walk around the small, idyllic town, interacting with its locals and helping them with their own issues. It’s through these small interactions that Alex builds up her own found family, slowly replacing the one that’s either died off or abandoned her.

While a majority of these moments are touching, they’re also where Life is Strange: True Colors‘ writing is at its worst. At times, everything the game’s characters are saying is powerful and relatable, but at others, the words ring hollow (and are sometimes downright inappropriate). Alex, a 21-year-old, doesn’t need to spout off internet-age memes when looking at random objects in the environment. It makes her come off as less of a relatable example of people my age (which may be a stretch, since I’m the ripe old age of 25) and more of a caricature.

Life is Strange: True Colors‘ story, although slow for its majority, is enjoyable. It’s not plodding, but more of a pleasant stroll, something to enjoy at a leisurely pace. That feeling changes entirely during the game’s last act, though, when things take an extremely sharp turn. The story pivots entirely from Alex’s acclimation to her new environment straight to her conflict against Typhon. It’s a dramatic turn of events, one that’s genuinely gripping. While I could stop playing at any time during the game’s early chapters, I had to finish after hitting the fifth.

While a majority of these moments are touching, they’re also where Life is Strange: True Colors‘ writing is at its worst.

It’s also during this final chapter that players will get one of the game’s six endings. At this time, I’ve only worked my way through the game once, however, I’ll likely give it another run to experience all the things I had missed, which the game generously shows at the end of each chapter. I don’t think it’s possible to get a truly “bad” ending, but there are some that would be worse than others, at least to me. I tried to get Alex to end up with one of the game’s two love interests, and succeeded in that regard. There are some other important decisions players can make about Alex’s future as well, but I won’t get into those spoilers.

There isn’t an easy way to recommend Life is Strange: True Colors. It, like the rest of the Life is Strange franchise, isn’t a typical game. It’s more akin to a visual novel or point-and-click adventure. The game is a slow, enjoyable experience, perfect for when you want to wind down for the night or get up in the morning.

More than that, though, it’s an emotional triumph. Experiencing Alex’s adventure and seeing the world through her excellently crafted perspective is a joy that hit me harder than I expected it to. I’ve often written off the Life is Strange franchise as unrelatable, never giving it the chance it deserved. However, Alex’s story, and the trials of those around her, ended up ringing true to me. Their fears, anxieties, and other emotions are all personal and come from a place that I consider common ground. Fear of old age, anger at corporations and their unending greed, and sadness and rage after the loss of a loved one aren’t exclusive to this game’s characters — they’re universal feelings. Life is Strange: True Colors, even with its imbalanced story and sometimes cringeworthy dialogue, wields its emotional heft masterfully.

Telltale’s The Walking Dead still reigns supreme in this genre. It’s a perfect emotional story for those seeking a more mature game.

My playthrough of Life is Strange: True Colors took around 10 hours, but that was just one run. Players can go through the game multiple times for their ideal ending.

Yes. Life is Strange: True Colors is relatable on almost every level, offering a solid experience for those who like slower, more relaxed games.

Topics
Tomb Raider, Life is Strange will headline Square Enix’s first digital showcase
This wild new gaming headset scans your brainwaves to find your weaknesses
The World Health Organization wants you to stay at home and play video games
New addiction center in London to focus on gaming disorder
The best RPGs for the Nintendo Switch
How to link your Fire Emblem Engage and Fire Emblem Heroes account
Xbox and Bethesda’s Developer_Direct: how to watch and what to expect
Goldeneye 007 comes to Game Pass and Nintendo Switch later this week
The best iPhone games in 2023: 31 games you need to play right now
I can’t believe I’m recommending Forspoken on PS5 over PC
Redfall’s May 2 release date revealed during Developer_Direct
The best Fire Emblem games, ranked from best to worst
Xbox just surprise announced and released a stylish new Game Pass title