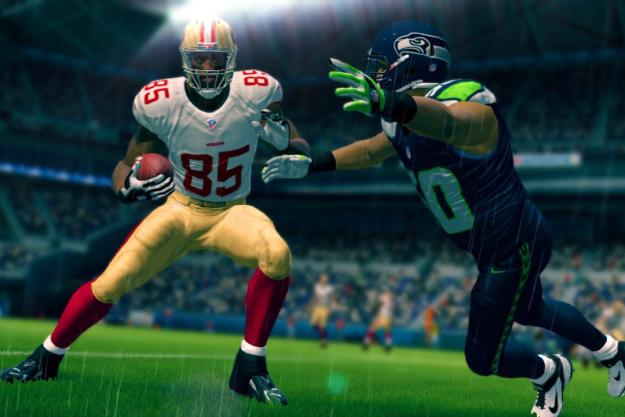 “EA Tiburon successfully fields a touchdown play in 'Madden NFL 25,' with across the board improvements that overcome the shortcomings of last year's game.”

For 25 years now, EA Sports’ annual Madden series has been a reliable constant. Every August, NFL fans line up for a chance to throw money at a cashier in exchange for the latest update to EA Tiburon’s pro pigskin sim. Licensing deals keep any potential competition at bay and make Madden the only NFL game around, but that’s hardly relevant. After 25 years, EA Sports knows what it’s doing with pro football.

Madden NFL 25 is both an acknowledgment of that history and a careful step forward. With new hardware releases imminent, 2013 is a transitional year for the industry. EA Tiburon’s latest is more than a mere roster update; it’s also a much-needed refinement of the Infinity Engine that was introduced in 2012. The game is still burdened by many of the same shortcomings that have plagued it in the past, but it remains, as ever, a capable NFL sim.

Madden NFL 25 revives and revises an older feature to fit into last year’s Connected Careers: Owner mode. As before, you can create your own player or coach and then play through a multi-year career from that perspective, either online or offline. Owner mode simply adds an expanded set of options for team management. You can still deal with trades, scout draft prospects, set lineups, train, and take direct control during games, but as an owner you’re also responsible for growing the consumer-facing side of your team.

This involves everything from setting prices on tickets, stadium concessions, and team merchandise, to building a new stadium or relocating to a different city. You’ll also hire the team’s coaching staff and improve it over time; just like the players, coach effectiveness is quantified as a set of stats. Owner mode layers a business sim on top of your pro football sim.

It is entirely possible to spend your whole Madden NFL 25 existence playing simulated football without ever touching Owner mode – simply choose Player or Coach instead of Owner when you start a Connected Career – but this is a welcome addition that broadens your focus to include elements like team popularity and attendance numbers. There is a lot of added satisfaction in watching your income flow rise as your team improves from game to game and season to season.

If there’s any major shortcoming to Owner mode, it’s the extra time that you’re forced to spend browsing through Madden‘s menus. While the series’ on-field play is generally strong, Madden menus tend to behave sluggishly. This is as true in Madden NFL 25 as it has been before; the sluggishness is no more pronounced now than it has been in the past, but all of the Owner mode-specific features live in the menus. It’s tedious to check out what each of your advisers has to say, though that’s more because of the less-than-responsive user interface than it is a case of the game burdening you with too much information.

Madden NFL 25 is at its best on the field. The quality of player animations is much improved after last year’s somewhat shaky introduction of the Infinity Engine. Players no longer bend and twist in impossible directions, though you’ll occasionally see some bizarre behavior. In one game during our review, the Redskins’ Evan Royster catapulted into a double forward flip after his foot lightly brushed a defender’s shoulder while diiving for the goal line. Such hiccups are not nearly as commonplace as they were before, however.

The new “Precision Modifier” feature allows you to hold down a button… to make the runner’s moves… more awesome.

New tools also enhance the flexibility of Madden’s running game. The new “Precision Modifier” feature allows you to hold down a button – left trigger on an Xbox 360 controller – to make the runner’s moves, for lack of a better term, more awesome. You won’t just stiff-arm a defender, you’ll plant your palm on his helmet and drive him to the ground as you run by. Modified trucks using the thumbstick steamroll through anyone that dares to stand in your path, and modified jukes come with an added bit of dramatic flourish.

The tradeoff with a Precision Modifier move is speed; while the modifier button is held down, the ball carrier moves more slowly. Effective use is sparing use; you’ve got to watch what’s happening on the field and react quickly in order to use Precision moves effectively. Time it right, and you can pull off some enjoyably epic football moments.

In truth, Madden NFL 25 running game creates plenty of opportunity for these epic football moments. The re-tuned Infinity Engine keeps the improbable tackles and trip-ups to a minimum, but it also makes even the smallest players exceptionally resilient against being dragged down by the opposing team. You see this most on the ground, with just about any running back capable of shoving his way through a mob of defenders for a short-to-medium gain. Expect the overly effective ground game to be one of the early issues addressed in EA Tiburon’s string of title updates.

Jim Nantz and Phil Simms return from Madden NFL 13 to provide in-game commentary and the results are once again uneven. You’ll hear them zeroing in on specific player narratives, and they’ll do so more and more as you create your own stories over multiple seasons. Unfortunately, their moment-to-moment playcalling is too non-specific and their “expert” opinion on any given play is out of place more than it isn’t. It’s jarring to hear, effectively pulling you out of your little NFL fantasy.

The elegant mix of sports sim and role-playing game in Connected Careers is a highlight for Madden NFL 25, but Madden Ultimate Team, exhibition play (online and off), and other modes offer additional options. Ultimate Team continues to be as hook-y as ever, with its allure of collectible card packs and constantly shifting team lineups. There are minor changes here and there, notably a slightly tweaked selection of Ultimate Team modes, but these amount to minor rule changes rather than full-blown new features.

… more than a mere roster update; it’s also a much-needed refinement of the Infinity Engine that was introduced in 2012.

EA’s ever-present bid for microtransactions is impossible to escape, of course. You still have to choose between investing tens of hours if you want a strong Ultimate Team, or spending real dollars. In Madden 25, there’s also a handful of Legends players locked off behind pre-order offers, though you can bet that they’ll pop up at some point or another as paid DLC.

The newly revised Skills Trainer is worth spending some time with, both to unlock the Legends players hidden away there and to check out Madden’s tweaked presentation on option plays. Running quarterbacks are hardly new to pro football, but the buzz surrounding guys like Robert Griffin III and Colin Kaepernick in the 2012/2013 NFL season galvanized the casual fan’s interest in the sort of complex run option plays that are gaining popularity in offensive playbooks around the league.

Successfully pulling off an option run – in which the QB chooses after the snap to either get the ball to the running back/fullback or hang onto it himself – is all a matter of reading the defense. You need to look at who’s being targeted and handle the ball accordingly. In Madden NFL 25, on-field icons highlight the player or players (in the case of triple options) that you should be watching, and an updated Skills Trainer mode teaches you the basics on how to make use of them.

To be clear: even with the expanded tutorial, it still isn’t easy for a casual player to make the most of read option plays. The on screen markers help, but emergent post-snap happenings sometimes render it impossible to tell whether you should hold the ball or dump it. That’s as true in the real world as it is in the virtual world, however. Even the most capable QB can’t tell what’s coming 100 percent of the time. The new signifiers certainly help you toward making an informed decision, but learning to use them doesn’t necessarily guarantee success.

In spite of a handful of shortcomings, some of which could easily be fixed with a balance-focused patch, series fans get a big improvement here over Madden NFL 13. Yes, it’s the only pro football sim around, but you’ll play it because you want to, not because you have to. Madden NFL 25 may not be the monumental change that its auspicious anniversary-bearing title might suggest – this is not the 2025 season, believe it or not – but it’s yet another solid effort from the EA Tiburon team.

The best PS5 headsets
The best multiplayer games on Nintendo Switch
Pokémon Scarlet and Violet: 8 tips and tricks to get started
The best Nintendo Switch games for 2022
How to evolve Pawmo into Pawmot in Pokémon Scarlet and Violet
Live now: Save $50 on the Microsoft Xbox Series S Digital Edition deal
‘Wordle’ today, November 24: Answer, hints, and help for word of the day (#523)
7 video game characters who deserve a Macy’s Thanksgiving Day Parade balloon
The best Xbox Series X headsets
Save $250 on the Razer Iskur X XL gaming chair for Black Friday
This PS5 controller Black Friday deal drops the price by $20
How to level up weapons fast in Warzone 2.0
10 video games that would make great movies