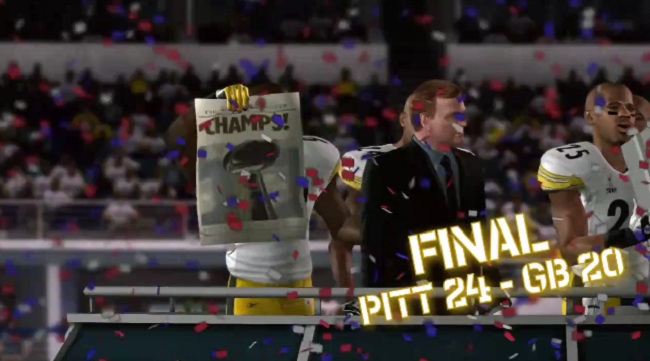 To all the Packers fans reading this article: there is nothing to see here. Move along to the next selection. May I recommend the lovely piece about Google calling out Bing over search results? It’s good stuff. Trust me Green Bay fan, you’ll be much happier if you do.

Every year EA Sports likes to roll its digital bones and try to predict the winners of some of the world’s biggest sporting event. The 2010 FIFA World Cup South Africa title correctly picked Spain to win the World Cup, and last week, Madden 11 picked the Packers over the Bears 24-17, and the Steelers over the Jets 21-19.  The game was even eerily accurate regarding the score—in reality, the Packers beat the Bears 21-14, a seven point win as predicted, and the Steelers beat the Jets 24-19, only a field goal more than the simulated score.

Working against Packers fans is also the accuracy of Madden as a prediction tool for the Super Bowl. In the seven years that the game has picked a winner, it has been correct six times.

In the simulation (which you can watch the highlights of below) the Steelers take an early lead, and go up 10-0 before the Pack strikes back through a touchdown with :42 seconds left in the second half.

As the second half begins, the Steelers strike first with another touchdown, but a Pack field goal followed by a touchdown with 9:00 minutes left in the fourth gives Green Bay its first lead of the game. But with 1:20 left, Ben Roethlisberger connects with a deep touchdown pass to take back the lead 24-20. As seconds tick away, Aaron Rodgers is intercepted, and the Steelers hold on to win Super Bowl XLV.

Obviously, despite the success the annual Madden simulation has had, it is still just a video game. The Packers are actually considered a 2 ½ point favorite—according to the Vegas odds makers—so take the simulation with a grain of salt. Of course if Madden does make its seventh correct prediction out of eight, logically we can only assume that it is devilry and we should burn it at the stake.

The history of the Madden Curse

Madden 22 Franchise mode: Tips and tricks to owning a dynasty