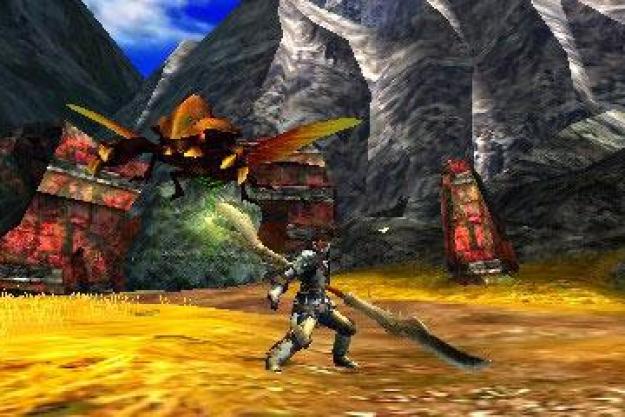 “I sensed an immense amount of hospitality,” said Yoshiki Haruhana, character and animation modeler, of his game The Legend of Zelda: Ocarina of Time after playing it for the first time in many years. “I felt as if someone were saying, “Welcome!” each time I entered a room. And when players go into a room, there’s a roughness in the way it attacks with its full strength.” The mitochondrial eve of 3D action role-playing games, Ocarina of Time is in many ways the genetic predecessor of Monster Hunter 4 Ultimate. And hospitality, never one of the series’ strengths, is precisely what makes Monster Hunter 4 Ultimate so deeply appealing on Nintendo 3DS.

An overwhelming sense of fantasy world completeness, love of exploring the outdoors, muscular violence focused largely on circling, striking, and chasing after creatures far bigger than yourself while collecting seeds and other spoils of nature in deserts, forests, and lake beds. Make no mistake: Monster Hunter the series is a child of Ocarina. Capcom’s success came from how the series eschews the hospitality and guiding hand Haruhana was so quick to note in Ocarina of Time.

Monster Hunter 4 Ultimate is the most hospitable hunt to date.

Monster Hunter’s quests are not about a lone figure’s destiny, they’re about personal growth and cooperation with other real people. Not finding the sword, but making a better sword out of the bones of a behemoth you brought down yourself. And while Monster Hunter has always had a playful sense of humor (little cat dudes!) and a warming hominess (roasting your own meat over a fire), it leaves you largely on your own to discover those pleasures. No little fairy asking you to listen, the depth of the adventure is your responsibility.

Monster Hunter 4 Ultimate, however, is the most hospitable hunt to date. More inviting to new players than the revised Monster Hunter 3 that hit Wii U and 3DS in 2013, far more transparent and swift than Monster Hunter Freedom Unite on PlayStation Portable, there’s a fluid, welcoming grace that elevates what otherwise feels very familiar.

On the surface, Monster Hunter 4 starts out in much the same way as Monster Hunter 3. You make a hunter of your very own using modest character customization tools, and that hunter is then welcomed into a strange new place where they meet eccentric locals on their way to becoming a respected, renowned slayer of beasts.

Monster Hunter 4 starts off in a desert where a set of missions teach you the basics: How to gather herbs, mushrooms, and other useful crafting items from hunting grounds; to slay small beasts; and finally, to complete basic quests doled out in town. Were it not for the slightest visual upgrade and the streamlined menu, a casual glance would make this look like the same game all over again. Oh I have to hunt those velociraptor-looking Jaggi to start out again? Sure, one good turn deserves a fourth, I guess.

The feeling of familiarity fades quickly, however, with newly flexible tendons linking all manner of fresh changes. Right from the start, your hunter feels more lithe, more maneuverable, and the tedium of lengthy dialogues, menus, and other incidental roadblocks that too often kept you from hunting in previous games are missing. Every little bit of Monster Hunter 4 is built to bring you into its deeply complex world faster and smoother than it has before.

Every bit of Monster Hunter 4 brings you into its deeply complex world faster and smoother than it has before.

Rather than wait to learn about Feylne (those little cat dudes) companions, you design yours from the outset. Cooks that can fix you up a buffing meal, quest-giving hunters guild attendants, and blacksmiths ready to build your gear sit in plain sight when you arrive in town, all on a single screen. Everything you need to know or do is more immediately accessible and understandable.

Marching out into the wild to kill your first of many giant Jaggis, training in each of a baker’s dozen of weapon types, the control improvements are immediately noticeable. Climbing up cliff faces, getting up from a knock down, and never having to worry about cumbersome swimming; everything feels dextrous and speedy in Monster Hunter 4 Ultimate, which in turn makes it easier to adjust to the game’s rhythm of taking quests, gathering goods, making new gear, and slaying big monsters.

In that regard the game is still as demanding as ever. Bringing down an enormous, dragon-like Gypceros in the Sunken Hollow still takes a long, long time even with a crew of hunters. Building the gear to do so, and finding players to join up with online (something you couldn’t do in Monster Hunter 3 Ultimate on 3DS), is streamlined, though. Better equipment comes after just two or three quests, a stark contrast to the six hours it’s taken in the past. For veterans, this means getting to high-level play is even quicker, and there are 25 more beasts to bring down here, alongside that sorely missed portable online play.

As good as it all feels, there is one potential problem depending on how Monster Hunter 4 Ultimate is played. On a standard Nintendo 3DS/XL/2DS, even the hunter’s newfound maneuverability doesn’t change the fact that the game just isn’t comfortable to control with a single analog stick. Using the touchpad to manipulate the camera while out in the hunting grounds just isn’t comfortable.

The Circle Pad Pro attachment fixes the problem perfectly, but the best way to play Monster Hunter 4 is the New Nintendo 3DS. The game’s excellent art and creature design benefits from improved textures on the new machine and the new C-stick nub is perfect for controlling the camera without adding the bulk of a Circle Pad Pro. The game is more accommodating than past entries, but this hardware hurdle is still present.

Accommodation and generosity are what distinguish Monster Hunter 4 Ultimate then, creating an even better gateway into one of the strangest 3D action RPGs to emerge in the past 17 years. By trimming back the minutiae and tedium, Monster Hunter 4 makes it easier to enjoy the series’ playful humor and feed anyone with an appetite for wandering a strange landscape.

This game was reviewed on a New Nintendo 3DS using a code provided by Nintendo.

The best multiplayer games on PS4