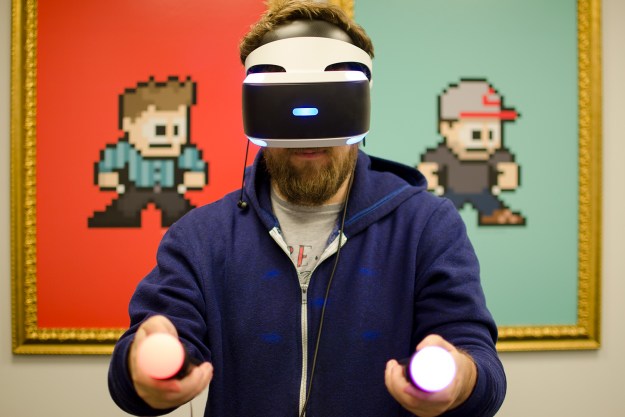 A little more than one year ago, Sony made history by launching PlayStation VR — the first, robust, true virtual reality experience available for a home gaming console. Development of the consumer VR scene has slowed somewhat since the 2016 launches of the HTC Vive, Oculus Rift, and PSVR, and we haven’t yet hit the torrent of exciting VR games that some people expected, but the technology is still improving. Sony has released a second version of the PSVR headset, which will replace the original model on store shelves this holiday season. While it isn’t a full-scale “2.0” redesign, the refresh adds some welcome quality of life improvements that should help make setting up and playing VR a much smoother experience.

Let’s get this out of the way: We did not detect any notable performance changes in the refreshed PlayStation VR. It offers the same VR experience as the original, and remains impressively immersive, especially considering its $400 price tag.

Its performance-related limitations, however, remain as well. The headset’s relative weakness compared to the Vive and Rift means that many games — especially those with intricate, 3D models — have a noticeable “screen door” effect compared to their analogs on other platforms. The limited detection range of the PlayStation Camera also means that it can easily lose track of the Move controllers on occasion.

Regardless, these were minor annoyances at launch, and they are no more problematic now. You can read our original review for the PSVR’s first iteration for an in-depth examination of the in-headset experience, which is essentially identical here. The upgrades instead are with regards to setup and logistical convenience.

Aside from an ever-so-slightly slimmer profile, the most noticeable difference between the new PSVR and the original model comes down to cable management. Instead of plugging headphones into the cable connecting the headset and PlayStation, which creates an awkward tangle of wires around the user’s head, the new PSVR includes stereo headphones that click right into the headset. The included headphones run under the back of the headband, clicking in on either side such that the earbuds dangle conveniently next to your ears. It still uses a standard, 3.5 mm jack for the connection, so users can switch to their headphones if they prefer, though they won’t integrate as cleanly and unobtrusively into the headset itself. The mute and volume buttons have been moved from the main A/V cable to the bottom of the headset, which makes it easy to feel and adjust game audio without removing the set.

We were very impressed by the PSVR when we first got our faces in it over one year ago, and it remains unmatched as an entry point for high quality consumer VR.

If you have nice headphones, they may be worth the extra effort. The attached headphones, standard in-ear buds made of black plastic, do not offer a remarkable audio experience. We found the sound quality to be indistinguishable from a new, personal pair of Sony’s basic earbuds.

The connecting cable between the headset and the processor unit, into which you used to plug headphones, has also been streamlined. Instead of running directly out of the back of the headband, it sits on the back-left side, allowing for the cable to more naturally drape over your shoulder. It’s also just a generally slimmer, single cable that only splits at the end where it plugs into the processor. We’re still a long way from seeing a wireless VR headset, but the cable situation was one of our biggest frustrations with the original PSVR, and even these relatively minor changes go a long way towards making the experience less cumbersome.

Don’t mind me, just passing through

The second major upgrade is much more niche, only affecting the subset of users with HDR (high dynamic range)-compatible TVs. The original PSVR’s processor unit didn’t accommodate HDR-compatible games, so PS4 (and especially PS4 Pro) owners with HDR10-compatible TVs who wanted to take advantage of games that support it had to unplug the PSVR unit and directly connect their PS4 to their TV. It seemed like a silly oversight, considering how much Sony was pushing HDR-compatibility as a premium feature on the platform.

The new version solves this problem, allowing HDR pass-through without having to change any cables or settings. We tested the feature using Assassins Creed: Origins on PS4 Pro and a 4K, HDR-compatible Samsung television. It worked without issue — Origins looked just as rich and crisp as it did without the PSVR processor unit. It’s a relatively minor convenience, but as HDR becomes an increasingly standard feature for televisions, the upgrade will become more and more pertinent.

We were very impressed by the PSVR when we first got our faces in it over one year ago, and it remains unmatched as an entry point for high quality consumer VR. The upgrades here are all welcome improvements, that, to be honest, probably should have been incorporated into the original headset. As such it’s a solid, if not particularly exciting upgrade. Players getting into VR for the first time this holiday season will have an easier time than their counterparts did last year, though we don’t think the new version offers enough of an improvement to justify anyone that already owns a headset.

Depending on what you want, the HTC Vive and Oculus Rift are more powerful pieces of hardware, but they’re also more expensive than the PSVR, just as the gaming PCs required to support them cost significantly more than a PS4. For the price, however, nothing yet competes with the value of PSVR.

The generation cycle of consoles has slowed down in recent years, meaning that the PS4 will remain relevant into the foreseeable future. As such the PSVR will remain viable for several years at least, though Sony is likely to upgrade the hardware annually.

Yes, PSVR is the best value per dollar that the average consumer can get in virtual reality right now. If you already have an original headset, however, then save your money for an iteration that makes more substantial improvements.