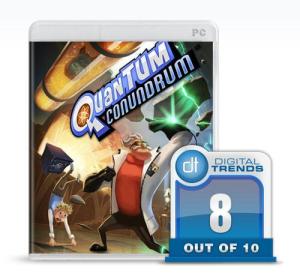 Given that Quantum Conundrum creator Kim Swift also served in key roles on Portal and its student-made predecessor, Narbacular Drop, I’ll get the comparisons out of the way right at the outset: Quantum Conundrum, like Portal, is a first-person puzzle in which players employ creative problem-solving using fictional sci-fi tech toys inside of a physics-based game engine. Many of the puzzles in both games are built around laser beams, quirky robots, pressure pads, weighted cubes, and science experiments gone awry. That’s where the similarities end, though those common bonds will admittedly never be far from the thoughts of fans of Valve’s game as they play Swift’s latest, created with the help of Airtight Games under the Square Enix publishing banner.

Now that that’s out of the way, let’s talk about the many things that make Quantum Conundrum unique and an experience that is well worth your time. The game drops your nameless, voiceless protagonist into the elaborate corridors and test labs of his mad scientist uncle, Professor Fitz Quadwrangle. John de Lancie, known to many as Star Trek‘s Q, lends his voice to the Quadwrangle role, offering insights into the family history between each puzzle and serving as a source of hints when too much is spent working on one puzzle. These hints aren’t full-on solves so much as they are subtle suggestions aimed at pointing players in the right direction.

The puzzles at the heart of the game are built around a Quadwrangle invention, the Interdimensional Shift Device (or IDS), which allows players to jump between one of four different dimensions–not all at once and not in every puzzle, however. It’s not until the final stage of the game that you have access to all four dimensions, and even then you’re still bound by the particular rules of each puzzle room. Your ability to tap into another dimension is always governed by one of the many generators scattered throughout the mansion; sometimes you’ll walk into a room with a generator that has one battery installed for each dimension you’ll be accessing, and other times finding some or all of those batteries becomes part of the actual puzzle.

Each dimension you can visit alters the world around you in fundamental ways. The first that you unlock is the Fluffy dimension, which applies a pastel-colored filter to the world as everything become light enough for you to pick up and carry. Next is the Heavy dimension, a metal-cast realm of deep-red colors that weighs everything down with additional mass. Slow Motion follows after that, with its sepia-toned filter giving the snail’s pace dimension the feel of an old timey movie. The last of the dimensions reverses gravity, casting the world in monochrome green tones.

The four dimensions and the many ways in which they can be combined amount to a very deep puzzle-solving toolbox. Only one dimension property can be active at a time, but it’s not unusual to, say, pick up and throw a safe across a gap in Fluffy and then immediately switch over to Slow Motion and jump on top of the same safe, using it as a sort of self-made, temporary moving platform. Timing and skill are often a requirement as well, such as when you switch between Fluffy and Heavy to launch a hex-shaped ball, catch it in mid-air, and throw it into a container like it’s a basketball.

The puzzles become increasingly challenging as you proceed through the mansion, requiring more diverse mixtures of dimension-hopping and more rapid switching between different states. It’s easy to find yourself stumped by one particular challenge, only to look back after solving it and marvel at how simple the solution ended up being. Don’t confuse “simple” with “obvious,” however. The answer to a particular problem is rarely tied up with a bow for you, especially in the later parts of the game. By the same token, it’s also that much more rewarding when you actually figure out one of the stumpers, even if the solution seems like a no-brainer in retrospect.

The underlying design in Quantum Conundrum is exceptional; the highest highs its puzzles offer easily outstrip the most clever moments from Swift’s earlier Valve game. It’s also surprisingly forgiving for such a challenging game. Checkpoint saves are sprinkled liberally throughout, not just between puzzles but also at important mid-puzzle moments. I felt many moments of frustration while I played when I became stumped by one puzzle or another, though that frustration never bled over to losing some ridiculous amount of progress as a result of a bad jump. It also helps that the platforming is quite solid, with a floaty feel to all of your jumps that makes it easier to adjust your landing location in mid-air.

It’s unfortunate then that there’s nothing quite as charming or captivating about the story or the world as Portal‘s GLaDOS and Aperture Science test labs. De Lancie is clearly having fun voicing Quadwrangle, and the fit of voice to character is pretty perfect, but the game’s sense of humor has the feel of a Saturday morning cartoon. Not Teenage Mutant Ninja Turtles either. No, Quantum Conundrum falls closer to the feel-good cheesiness of throwaways like The Gary Coleman Show.

Okay, maybe not that bad.

It’s more grating than memorable, however, especially when you find yourself stuck repeating a certain puzzle and having to hear the same comments from Quadwrangle over and over (and over and over and over) again. The art design is similarly at odds with itself. While it’s certainly charming, it’s also not particularly memorable. Each section of the mansion that you visit is visually unique in some ways, but there’s also still a lot of corridor-crawling through a bunch of similar-looking hallways and non-descript rooms, a fact that the game even calls attention to in a joke.

The good most definitely outweights the bad — or, more accurately, the generic — in Quantum Conundrum. Swift’s talents as the architect of Portal are very much in evidence here. More than that, this new game demonstrates her evolution as a game designer. Quantum Conundrum may lack some of that Valve polish — let’s not forget that no less a talent than the Chet Faliszek/Erik Wolpaw writing duo penned Portal — but it more than makes up for it with some of the smartest first-person puzzle gaming that we’ve yet seen. Quantum Conundrum is out now on Windows PC platforms and it’ll be coming to Xbox Live and PlayStation Network in mid-July 2012.