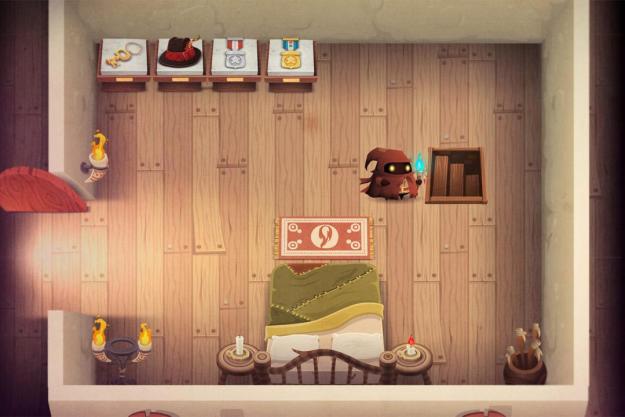 I couldn’t stop thinking about poetry as I played Spry Fox’s roguelike puzzler, Road Not Taken.

The cleverly insidious game takes its title from the famed Robert Frost poem, of course, which makes an eloquent statement on indecision and the futility of regret. And it’s a sensible one to apply to Road Not Taken, as it’s a game built around economizing your movements to solve spatial puzzles. Backtrack too many times and you’ll use up all your energy, falling down dead in a cold, snowy, endlessly changing forest.

I couldn’t stop thinking about poetry as I played Spry Fox’s roguelike puzzler, Road Not Taken.

But it wasn’t Frost’s poem that stuck in my mind. It was another old favorite: Do Not Go Gentle Into That Good Night, by Dylan Thomas.

Though wise men at their end know dark is right,
Because their words had forked no lightning they
Do not go gentle into that good night.

It’s not indecision or regret over bad decisions that rankle me in Road Not Taken. It’s the unceasing failure. You play as a nameless, hooded ranger in the game, venturing into the forest at the dawn of every winter to rescue the children of a local village. Each ranger has a 15-year tenure, with increasingly difficult puzzles found in the forest for every year that passes.

Of course, when you fail and die before those 15 years are up, your predecessor starts all over again at year one. So you begin your climb again, a little bit wiser in the ways of this colorful, gridded world, but with none of the tools that the previous ranger ended with, not even the house he earns after year one.

The forest’s puzzles consist of lifting and throwing a vast assortment of objects around. Sometimes you’ve got to group them together to clear a path to the next screen. Other times you’ve just got to shift the crap in front of you so you can get to a nearby child. You can carry objects while you walk as well, but every step you take eats up some of your valuable energy.

The challenge grows out of just how much stuff there is in the forest, and how differently all of it behaves. You can only throw things in a straight line away from your ranger, which makes careful positioning an important consideration when solving Road Not Taken’s puzzles. Some objects simply sit there. Others chip away at your energy. Still others help, or warp you to a random location in the forest, or multiply to the point that they fill the screen if left unattended.

There’s also a surprisingly deep crafting system to keep in mind; that’s how you deal with some of the more meddlesome obstacles in the forest. As your journal fills with information on the objects and creatures you meet, you also learn what you can combine – by throwing stuff into other stuff, naturally – to either create items or transform an object into something else.

The challenge grows out of just how much stuff there is in the forest, and how differently all of it behaves.

You wander about town between each round of puzzle solving, interacting with the locals and pawning resources off on them in exchange for friendship (measured on a meter with red hearts). Closer friends offer more kickass gifts: charms that you can equip to make your forest adventures a little easier (or tougher, in some cases); information that fills out your journal; and new obstacles that you can “ban” from future forest trips (no more than two bans at a time).

For all of this investment in building your little ranger’s life, only the journal that keeps track of your discovered crafting recipes and the obstacles that you’re able to ban carry over from generation to generation. It feels a little bit clunky from a design standpoint. Every time you return to town again for the first time, you’ve got these little shreds of tutorial and “welcome to your new life!” nods that quickly become tiresome.

Yes mayor, I know I only have to save half the children to “complete” the year. And I know I can teleport back to you at any time when I’m in the woods. Yes cat, I know you’re happy to see me when I get my house back. And I know I’ll have to throw you into the next room to keep you from getting in my way, just like you always do.

I know about the money-grubbing young woman who desperately wants to settle down—she never changes. I know about the woodsy girl who loves her berries, and about the bespectacled boy who just wants to be friends. The residents of the village change within a lifetime based on who you “invest” your few resources with – even to the point that they might get jealous if you invest a lot more in another villager – but they reset along with everything else when your new ranger comes to town.

Road Not Taken isn’t without hooks. It really sinks in once you get used to the idea that there can be success within failure. Saving every single child becomes a significant challenge after the first third of your ranger’s tenure. It’s important to let go of your completionist sensibilities and just focus on solving as many puzzles as you can. By the time you reach the later years, you come upon scenarios in which a single wrong move makes saving a particular child impossible. Do you just give up and restart at that point? Not wise.

I learned this after failing over and over, countless times over a period of more than a week. Road Not Taken has a creeping appeal in the way you find yourself thinking about it between sessions. It’s back to Frost’s poem here, but it wasn’t regret I would feel as I realized what I had done wrong in botching a puzzle solution. It was excitement at the idea of coming upon a similar scenario and testing out a different strategy.

This is a smart game, maybe even a little too smart for its own good, and it’s insidious in the way it sinks its teeth in. As dull as the grind to get back to the challenging stuff can be, there is also brilliance in every gentle re-introduction. This isn’t a game you binge on; it’s one you sit with for awhile, then think about for awhile, then sit with again for awhile longer.

Sort of like a poem, really. For all the times that Road Not Taken got the better of me, not once did I go gentle into that good night. I simply felt frustration, I felt rage, as Thomas wrote, at the dying of the light.

This game was reviewed on a first-generation Alienware X51 gaming PC using a code provided by the developer.