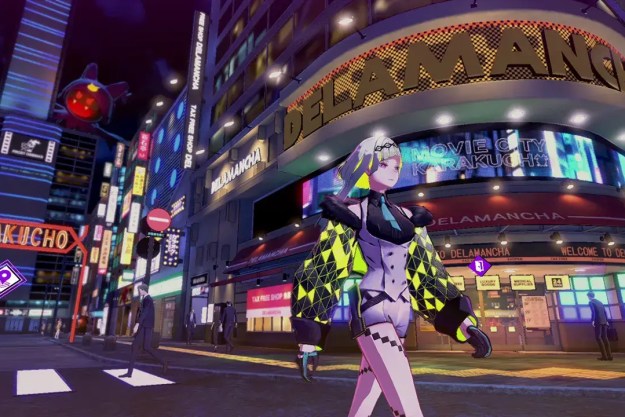 “Soul Hackers 2 innovates when it comes to RPG gameplay, but its story is a step down compared to Atlus' recent hits.”

I found my third dead body about five hours into Soul Hackers 2. After 30 hours, I’ll find out that corpses and plot twists are nothing to be surprised about.

Aion, the supercomputer version of God, foresees the end of the world. It creates Ringo and Figue, two humanoid representations of its consciousness, to stop this impending apocalypse. Unfortunately, they arrive too late to save their targets: genius scientist Ichiro Ondo and demon summoner Arrow. That’s where the game’s titular Soul Hacking comes in. Bring back the soul and apparently the body revives with it. Ringo ends up reviving three people who agree to fight together for the sake of their own goals. Who’ll really win in the end, though?

Soul Hackers 2 seems like it has everything it needs to succeed as a JRPG filled with sci-fi intrigue. However, it speeds past the stakes and character arcs in service of an anticlimactic race to the finish. Thankfully, its finely crafted turn-based combat and progression make an otherwise stale story easy to digest.

Like other Atlus JRPGs, Soul Hackers 2 duplicates the Shin Megami Tensei formula while meaningfully building on it. Recruit demons, fight with them, and fuse them into stronger allies. Once in battle, players need to carefully use type advantages and turn economy to wipe enemies out as quickly as possible or survive a brutal battle. One misstep can be the difference between getting bodied by a full team of demons or knocking them all out with a multi-hit finishing move.

Soul Hackers 2 has a knack for making every action feel like it’s worth something.

Soul Hackers 2 uses this same formula to an extent with notable iteration. It brings back the Shin Megami Tensei mechanic where the demons can be fused together to create ones with higher stats compared to ones pulled straight from the Compendium. It also lets you level up at a reasonable pace so that you don’t need to grind forever, with enough new abilities and demons to keep you moving forward.

Another perk? Fighting demons helps you level up and collect drops for trading. You can meaningfully upgrade your COMP with stat boosts and passive perks (aka your weapons) using enemy drops or items your demons find from exploring. Some drops are also meant to be traded for healing items and powerups, so resource collecting is a highly rewarding experience with multiple purposes.

Soul Hackers 2 has a knack for making every action feel like it’s worth something. Shin Megami Tensei spinoffs typically involve exploiting enemy weaknesses to appeal to the turn economy. In this case, you gain “Stacks” each time you hit an enemy weakness. Ringo releases these stacks in a “Sabbath” at the end of each turn for additional damage. Some demons even have their own “bonuses” that activate during these Sabbaths. One might poison all enemies, while another may grant the party a bit of health. It’s easy to stack the turns in your favor, as if you’re doing the RPG equivalent of couponing, and have a consistently satisfying time building out the perfect party composition.

Now, if only the story impressed me as much as the gameplay.

My English professors used to stress “show not tell.” Unfortunately, Soul Hackers 2 does a lot of telling and not much showing. I stand by my preview, where I wrote that the story quickly lost its shock value after the first three deaths. I get it. Aion beings can bring people back to life with soul-hacking superpowers and everyone has a problem with their ex.

Soul Hackers 2 moves fast. It dives into the memories and regrets of Arrow, Milady, and Saizo early in the plot. To some extent, Soul Hackers 2 tells the story of three Demon Summoners who came back to life to address their regrets and save the world. It doesn’t meaningfully weave the threads together, though. The three heroes convincingly react to their nemeses eventually, but the buildup to that moment is missing. In fact, some of their motives are hidden behind plot twists later in the story. The reasons for keeping these intimate moments outside of the main plot make sense in context, but that means that you’ll have to be in for the long haul as you wade through lackluster plot and character development.

I always felt like a bystander rather than someone who was in the moment myself.

Some of it could even be due to having Ringo as the protagonist. To be clear, I like Ringo as a hero. Her spunk and sense of humor carried otherwise stale conversations. However, she’s also essentially a newborn.

Soul Hackers 2 tackles what it means to be human and what Ringo and Figue learn from their passionate allies. Ringo as the protagonist just feels like a waste when Arrow, Milady, and Saizo have such complex backstories that we only feel in the third person. I always felt like a bystander rather than someone who was in the moment myself.

Soul Hackers 2 paces its combat perfectly, even if it moves too fast to savor the story. However, there are other moving parts that could have used some work.

Areas like the Axis and Club Courteous offer sidequests to fulfill, but they’re never anything more than fetch quests, which feel like a waste of time. Some of them have valuable items that make it worth it, but most of the time, it’s easier to pretend they don’t exist. I also found it easy to ignore the Soul Matrix, which the game reminds you to visit every other time you visit the Safehouse. Exploring it will give your party members valuable passive perks the more you raise your social bond with them, but you’ll have to return to a bland, repetitive dungeon over and over to do so.

Most of the controls work fine enough, but there are some quirks that bugged me. It’s a bit of a hassle to adjust the camera while running, and it tends to follow Ringo a little too closely. I also noticed a lag with Ringo’s slash, an attack that can be used while exploring to stun enemies before a random encounter. You’ll sometimes get caught in battle even if you technically “hit” the enemy as the game registers that you’ve walked into them and initiates the fight. I found myself having to time my slash early to make it hit when I wanted, which made gameplay feel a little unnatural at times.

These aren’t deal-breakers compared to the bigger picture. However, they start to add up when the only positives are the gameplay and progression.

Soul Hackers 2 is like the middle sibling of the Shin Megami Tensei family. It doesn’t have the dark fantasy legacy of the series its spun off from or the same high school hijinks as the Persona series. Instead, it’s a perfectly fun, if inoffensive comeback game for a long-dormant IP. However, it doesn’t feel like it’ll have the same staying power as some of Atlus’ recent hits. Its emotional moments didn’t land as hard because of a lacking narrative that tells more than it shows. It innovates on some parts of the SMT formula with strong RPG systems and progression, but it isn’t enough to make it another must-play.

Soul Hackers 2 is relatively short compared to Atlus’ other works. It took me between 30 and 40 hours to finish.

Yes. It’s a soft recommendation for Shin Megami Tensei fans, though If you’re new to Atlus games, it’s not a great starting point.

Soul Hackers 2 was reviewed on a PlayStation 4.

Topics
PS VR2 games: launch games and what’s coming later
Best PS Plus deals for January 2023
The Legend of Zelda: Tears of the Kingdom: release date, trailers, rating, and more
The PS5 games with the best graphics
Here’s what E3 2023 could look like without Sony, Nintendo, and Microsoft
Marvel Snap’s Friendly Battles set a new bar for its post-launch support
WWE 2K23 improves the wrestling sim with subtle tweaks and a bit of chaos
Meta Quest Pro VR headset is $400 off (and save on Meta Quest 2)
How to change classes in Fire Emblem Engage
Fortnite: How to collect Dragon Balls on Adventure Island
How to get all Emblems in Fire Emblem Engage
Fire Emblem Engage bond levels: how to get max Bond Levels fast
Marvel Snap Battle Mode: How to play Marvel Snap with friends