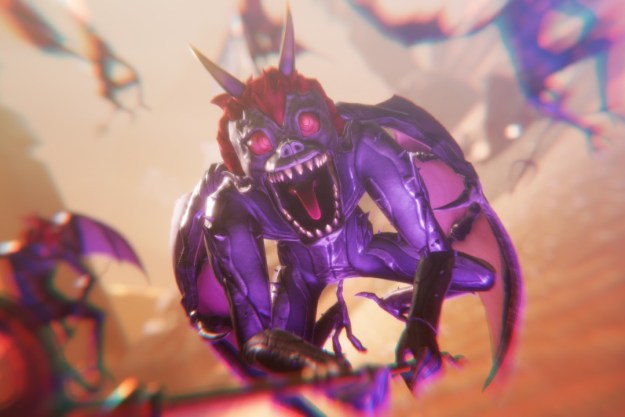 “Shin Megami Tensei 5 is yet another gem for the Nintendo Switch that every JRPG fan needs to check out.”

Shin Megami Tensei 5 is the latest entry in Atlus’ JRPG series, which was also spun off into the immensely popular Persona games. Like other Megami Tensei games, SMT 5 focuses less on friendship and slice-of-life relationships and more on gathering a personal army of demons to fight against gods and demons. It’s about surviving a holy war, all while making decisions that will decide the fate of the world.

Shin Megami Tensei 5 takes this premise to the next level, sporting a stronger story than ever, better gameplay, increased customization, key nuances, and more. As soon as I was transported to the Netherworld, a sandy wasteland, I knew this game would have me saying, “OK, that’s sick,” time after time. And it did.

While Megami Tensei titles always feature strong stories, Shin Megami Tensei 5 focuses more on its narrative than ever before. In fact, this is one of the most enjoyable stories in the series’ history thanks to the extra care put into it.

The tale begins as usual for the SMT series. There’s an unnamed hero living out an ordinary life. Before you know it, he’s unsuspectingly blasted into a mirror world full of demons and ruins of places he once knew. How did things get this way? That question — and more — is answered as players progress through the mystery. The hero’s body-sharing buddy, Proto-Fiend — who is a mystery himself — hints that this is the future of Tokyo after a holy war between the angelic army of Heaven and Hell’s demonic forces. After being fused with this Fiend in a new human-demon form called the Nahobino, the goal is to bring order to an ongoing battle while traveling between the pre- and post-wasteland worlds.

Throughout the story, players meet many more characters and come face-to-face with different choices that decide what ending they’ll get. The most important choices come from a classic series feature called Reasons, which are characters that stand for different alignments. Things like law, neutrality, chaos, justice, and more take the form of different characters. During moments similar to Persona’s Social Link scenes, players enter deep conversations with characters. Responses to their questions and actions end up defining the character and the fate of his world. The story is based around the angelic and self-righteous forces of Heaven and the chaotic “simply trying to get by or rule” forces of Hell, and those high stakes make choices all the more powerful this time around.

This is what SMT has always been about — morality and the beliefs of humanity versus those of higher beings — and the new systems add more power and immersion to the mix. Questions like whether a man should be able to take another’s life and if one should atone for their sins, despite the circumstances, come to the forefront. It’s up to the player and their own beliefs to say yes or no and shape reality. It’s a beautiful concept that really doubles as a commentary on human beliefs, and tackles the “morality choice” idea better than any other game out there. In fact, the future of the world itself becomes an overlying mystery depending on the player’s choices, and that adds even more intrigue on top of the base narrative.

The central mystery kept me tuned in the entire time. There are specific moments where it shines, but they’ll land harder the less you know going in. Just know that the lessons learned throughout Atlus’ history of SMT and Persona stories are out in full force here.

More freedom than ever

Speaking of lessons learned, the actual gameplay of Shin Megami Tensei 5 truly feels like an evolution for Atlus. The classic turn-based battle system returns here, complete with the SMT signature “one more” mechanic. This entails being able to hit an enemy with their weakness to earn an extra turn in battle. Be wary, though: An opponent can do the same thing right back to you, adding an extra layer of strategy and difficulty to the battles throughout the game. A lot of the time, I was editing my character and customizing my demon team around this mechanic to get the best battle results possible. Think of it like a demonic version of Pokémon, but remove the thought of looking for the cutest team possible because that won’t fly here.

While the battles are fun, most of my enjoyment of SMT 5 comes from popping into the World of Shadows and customizing my team. I spent hours simply editing my team of monsters, finding synergy between demons, fusing demons into the most fitting form for my crew, and looking for the best Nahobino build possible.

Yes, demon fusion is back and better than ever, with Atlus bringing in the ability to choose what moves players want to pull for a demon fusion. This makes it a lot easier to make a dream demon build. And thanks to the new Essence fusion mechanic, players can take that customization even further.

Essence fusion allows players to take the Essences of demons they’ve collected and attribute them to other demons or even the Nahobino himself. This means players can not only take skills from different demons, but affinities as well. For example, I have a Pyro Jack, but I’m not a fan of his inherent fire skills. So I’ll pull from a Flaemis instead. Players don’t even have to just pick from skills; they can change their Nahobino and demon weaknesses, resistances, and strengths as well. I found myself changing my Nahobino from a buff and debuff machine to a healer to a red mage all-rounder many times. With all the hours I put into the game, I’m sure a solid five of those came from messing around with team compositions alone.

I was absolutely overwhelmed with what this game allows you to do on top of the already great party customization that’s always present in SMT.

The freedom of the game extends into the exploration as well. The simple addition of a jump button to the series really opens the door to some fun lite-platforming segments similar to those found in Kingdom Hearts. Thanks to the immersive setting and the many hidden set pieces to explore, this is easily Atlus’ best environment yet when it comes to traversal. Players can also use save points to fast travel from place to place, making it even easier to get around.

There are even side-missions where players get to make impactful choices. Accepted a mission from a Lilith, but want to betray them to join an Angel? Go for it. Want to keep the spoils from a quest for yourself and defeat the person you accepted it from? Feel free.

If you’re going into Shin Megami Tensei 5 praying that the ease of Persona hasn’t rubbed off on the original demon negotiating series, fear not. Or maybe do fear, because SMT 5 is a real challenge, as the series has always been.

If you really want a reason to get super-strategic in battles, SMT 5 is the game that will put you to the test in ways that hardcore mode Fire Emblem wishes it could.

On more than one occasion, I went into a battle, got hit once, and just let the enemy steamroll my team as I said, “Yeah I’m not ready to beat this guy.” Trust me: if you’re new to SMT, this game will train you to save before literally any and every big fight or side mission, even on normal difficulty.

This can be a blessing or a curse depending on what kind of player you are. If you really want a reason to get super-strategic in battles, SMT 5 is the game that will put you to the test in ways that hardcore mode Fire Emblem wishes it could. However, if you’re coming from the Persona series and hoping for a similar experience, then it may rub you the wrong way. I think this game really could have benefited from the Shin Megami Tensei III: Nocturne HD Remaster‘s suspend feature, but it at least allows you to instantly teleport to any save point to save your game at any time.

Adding to the difficulty for some may be the return of the demon negotiation mechanic, which can be hard to get the hang of at first. To recruit new party members, you’ll have to appeal to them in a conversation. Sometimes, you can get on their good side with simple words and other times you’ll have to pay the toll through items, health, money, and other means. Many times, you’ll just be out of luck and have them run away or even try to kill you.

Thankfully, as with the SMT 3: Nocturne HD Remaster, Atlus has added a casual difficulty this time around, though I’ve heard that casual mode even has its challenging moments from time to time.

Shin Megami Tensei 5 showed me that Atlus hasn’t lost its luster and probably won’t for a long time. It kept everything the series is known for intact while adding more and leaving me wanting even more than that. Not only is it a treat for anyone interested in a good JRPG story, but for those wanting a true challenge and to work their strategy muscles as well. This challenge may be a bit of a barrier to newcomers. However, it is a barrier I highly recommend breaking down for a truly enjoyable experience.

It took me around 70 hours to finish the game. However, I went after many sidequests, spent tons of time customizing my party, and died a lot. So depending on how you tackle this behemoth, your time may vary.

This year has been chock-full of great JRPGs. I recommend Tales of Arise, Scarlet Nexus, and there’s also the upcoming Pokémon Brilliant Diamond and Shining Pearl. But Shin Megami Tensei 5 is a unique experience you shouldn’t miss out on.

Yes. It’s also a must-own Switch title that every RPG fan needs in their collection.

Topics
This chaotic Switch puzzle game is a weird, wonderful way to end 2022
After 25 seasons, Ash Ketchum is retiring from Pokémon
Crisis Core: Final Fantasy VII: tips and tricks for beginners
Pokémon Scarlet and Violet: 8 tips and tricks to get started
The best skills to inherit in Fire Emblem Engage
Dead Space: how to fix the centrifuge
How to fast travel in Forspoken
Star Wars Jedi: Survivor will now release in April following delay
How to get the Silver Card in Fire Emblem Engage
One Piece Odyssey’s great ending would have made for a perfect anime arc
Don’t need the Xbox Series X? The Xbox Series S is $50 off today
Tomb Raider returns as a mobile roguelike via Netflix
Samsung’s 49-inch Odyssey G9 gaming monitor is $600 off today