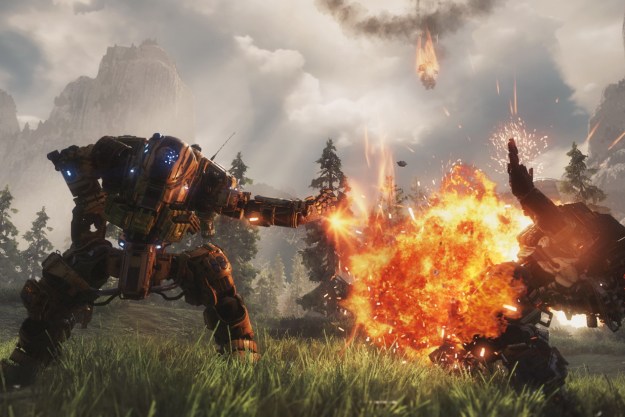 “Respawn Entertainment has improved everything about the original 'Titanfall' in an expanded package that’s a ton of fun.”

There was the time when an enemy player and I both fired grappling hooks past each other, whipping at full speed toward each other across a wide gap between buildings, and I fired off a kick to their face as we nearly collided, snagging a speedy (and hilarious) kill.

Then there was the time I used my Ronin Titan’s sword to block a volley of rockets and close in on an enemy Titan so I could slash it to ribbons. I batted the ejecting pilot out of the air, adding insult to injury.

And that time I sprinted around a factory, sliding and shotgunning enemy soldiers as they shouted to one another in panic, while huge construction robots built prefabricated buildings, threatening to crush me in the midst of their operations.

Titanfall 2 is the ideal version of developer Respawn Entertainment’s 2014 high-speed shooter, expanding and improving on it in every way. It’s constantly, consistently fun, and as the shooter field diversifies away from present-day military style games to include fast and vertical movement, Titanfall 2 has honed and refined the original’s best ideas to make a game that feels fun, and has a knack for facilitating awesome chance encounters.

A boy and his robot

A solid, refreshing first-person shooter, the original Titanfall combined two interesting ideas: For most of a multiplayer match, players control fast-moving “pilots,” who can double-jump, easily climb buildings, and run along walls. After a while in each match, things shift when players start to summon Titans – giant walking robotic tanks. The Titans’ appearance could totally changes the tenor of battles, both when piloting the robots and when fighting them afoot, providing a variety of situations and a constantly changing strategic focus.

Despite the level of hype built around it by publisher Electronic Arts, you wouldn’t be blamed for skipping the original Titanfall. Though its moment-to-moment gameplay was compelling, the game struggled to keep players engaged, long-term. Titanfall lacked a complete single-player campaign, instead pushing players into multiplayer matches with story elements involving other characters basically taking place in radio transmissions. Though it had a long-term progression system, the options for Pilot and Titan load-outs weren’t especially robust, either.

So Respawn’s first order of business in Titanfall 2 was to make that bigger game with all the things players wanted from the original; namely, a story-driven single-player campaign. The game’s story focuses on a soldier named Jack Cooper who hopes to become a Titan pilot. Before his training is complete, circumstances leave him behind enemy lines, forcing him to team up with a Titan – BT-7274. Much of the rest of the campaign becomes about the bond forming between the soldier and his robot pal.

Respawn’s story in Titanfall 2 might be of the sort players and sci-fi fans have seen before, but the idea of a Pilot and his Titan working together and forming something of a friendship is exactly what the series needs. A simple dialogue-picking system lets players choose some of Cooper’s responses to BT, who is almost the only character he interacts with throughout the game, and it’s just enough to inject some control into their relationship and some personality into BT. The robot is pretty funny, and it’s great to spend the campaign hanging out with him.

The idea of a Pilot and his Titan forming a friendship is exactly what the series needs.

Though it is a linear affair, Respawn has done a phenomenal job of using Titanfall 2’s best ideas to make its single-player battles feel open and varied. Level after level, players are thrown into scenarios uniquely suited to test and take advantage of the pilot’s vertical mobility, and the Titan’s ability to…  bash stuff with huge robot fists. The aforementioned factory, for instance, has pathways moving and changing while players try to quickly navigate them. A later stage forces players to use cranes and other machines to move objects around the area to create ways to clear huge gaps.

Titanfall 2’s fast-paced movement system is a joy to use, to the point that it almost covers up some of campaign’s other technical shortcomings. Enemy soldiers aren’t especially smart or deadly in any case, but jumping over and around them, or streaking past a group as you run on a nearby wall only to drop down and kick one in the face, is always a lot of fun. Titanfall 2’s battles are about finding creative ways to take out bad guys and clear rooms, and that shifts the focus on what’s important in any given fight.

If there’s a weak point in the campaign, it would probably be the one-on-one Titan boss encounters that take place throughout. Titan-on-Titan combat, generally, is a weaker aspect of the Titanfall formula – the robots are interesting because of the asymmetrical opportunities they offer when using them to fight pilots, or when trying to deal with a Titan as a pilot. Boss fights often end up feeling like a slow-moving battles of attrition. Titans aren’t especially maneuverable, so fighting bosses becomes about trying to run over to nearby health-restoring batteries before you get trounced too badly, then turning back to dish out damage. These fights feel like they could be much more strategic than they ever really are.

Even these slower boss fights, howevr, aren’t tough enough to really stall players, and the story of Cooper and BT is enough fun make these hangups feel inconsequential.

While the campaign is new and fun, multiplayer clearly remains Titanfall 2’s focus. Simply put, fighting against other players is phenomenal.

Respawn has greatly increased the number of weapons, abilities, and Titan customization options players can use in multiplayer. Your pilot’s loadout revolves around a main ability, such as Titanfall’s personal cloak, the new grappling hook, or stimulants that increase your movement speed and healing. Each option changes your pilot’s look and the way you play – the hook is great for fast-moving players who want to be up high, while cloaking might be better suited to sneaking and sniping. Then again, cloaking and shotgunning players up close is a hilarious tactic, and high-speed movement is great for boarding and attacking enemy Titans. It’s all about how players want to approach the battle.

The field of Titans has also been widened, with players picking a robot with a specific set of abilities, rather than simply picking a gun and a chasis. Each Titan packs different weapons and abilities, as well as a slightly different personality. The “Tone” Titan uses long-range guns to target lock-on missile attacks; the “Scorch” Titan sets everything on fire, wrecking pilots and enemy robots with napalm; the Ronin Titan relies on sword-based melee combat. These options mean players can adjust almost on the fly to specific multiplayer modes, the makeup of enemy teams, and best ways to augment their squad’s collective loadout.

Titanfall 2 also expands on the multiplayer offerings of the previous game to offer more ways to face off against players, and each mode demands something a little different from the others. Titanfall holdovers like “Capture the Flag,” “Attrition,” “Hardpoint,” “Last Titan Standing” and “Pilots vs. Pilots” are back and just as frantic as they were last time, and Respawn has thrown in some other cool ideas, like the ridiculous “Colosseum,” where players fight quick one-on-one battles, and “Bounty Hunt,” in which teams compete with each other to stomp AI-controlled enemies to earn money.

These multiplayer tweaks don’t necessarily feel game-changing on their own, but each of them enhances the best aspects of the Titanfall formula. Titanfall 2 encourages you to go fast and hit hard constantly, and the variety of ways to approach any given match keep battles fresh and exciting. Respawn has created a shooter that’s a ton of fun to control and a ton of fun to play. Every match is defined by a smattering of crazy moments and acrobatic encounters. Titanfall added something new and unique to the field when it was released in 2014, and two years later, Titanfall 2 only makes it better.

If the first Titanfall was a great concept in an anemic package, Titanfall 2 is that concept honed, expanded and fully realized. It couples a slick, well-made campaign with deep multiplayer to make a shooter experience that’s great all around. Respawn has taken all the best lessons from its first foray in 2014, and it’s all paid off – Titanfall 2 is among the best shooters of the year.

The biggest shooter franchise on the market, Call of Duty, has mirrored the setting and features of Titanfall in its last few iterations: There may not be any giant robots to drive in Call of Duty: Infinite Warfare, which comes out in November, 2016, but it does take place in space (like the Titanfall series) and do some of the same things that Titanfall 2 tries. Blizzard’s Overwatch also offers some similar gameplay in terms of movement and pace. Generally, though, Titanfall 2’s solid campaign, unique emphasis on movement, and gameplay variety helps it stand apart.

Titanfall saw pretty significant post-launch support with downloadable content, including extra maps and gameplay modes, but it’s always tough to guess just how long a shooter will last. Respawn has said it plans to release maps and modes for free, however, in order to avoid fracturing the Titanfall 2 community, and developers have said they plan to support the game quite a bit post-launch.

Absolutely. Titanfall 2 is better than its predecessor in every way – it’s extremely entertaining to play, sporting a solid single-player campaign and great multiplayer, and it offers a kind of gameplay that’s not quite like anything available in 2016. If you liked Titanfall especially, this is the version of that game you’ve been waiting for.