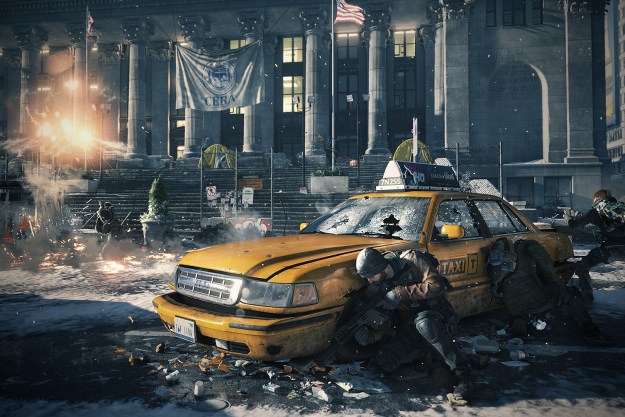 “The Division puts players on a treadmill without a carrot.”

Let’s get this out of the way up front: The Division is absolutely, 100 percent better when played with friends. It’s designed with friends in mind. It’s at its best when you can coordinate, plan, talk, and fight together.

When played alone, The Division is just an OK cover shooter held back by role-playing and massively multiplayer online elements. It handles like Splinter Cell: Blacklist or Gears of War, but struggles to provide the same tactical creativity. You hide behind chest-high walls to avoid enemy fire, occasionally popping out to squeeze off a few shots, but you’ll spend a lot of the time shooting enemies who shrug off bullets and take a full magazine (or more) to bring down.

Absent the requirement of moving carefully to stay alive while executing flanking maneuvers or using the environment to your advantage, The Division becomes a shooter where you do a lot of waiting, and hiding.

That problem — disparate elements cobbled together — is evident throughout The Division. It’s a game that wants to keep you turning its hamster wheel, whether to have fun or just to compulsively complete it. Unfortunately, most players won’t find enough of the former to keep it spinning.

Like other games branded with the “Tom Clancy’s” moniker, The Division starts with a pseudo-realistic scenario — a biological terror attack in a major American city — and draws it to extremes for video-game reasons.

In the game, a clandestine group of well-trained soldiers called “The Division” live out their lives as part of the general American populace until they receive a signal telling them it’s time to go fight. Then they go meet up with their commanders, grab some guns, and start fighting to protect the American way of life.

In The Division, this means you roam the open-world streets of New York, battling gangsters  who’ve seized power in the wake of a biological attack. You have to go save some hostages; you have to rebuild a base of operations to dish out food and medical supplies; you have to flip switches to maintain heat and power in the city; you have to stop scary men with guns who would threaten civilians. The game includes several long, involved “missions” with tons of the standard Ubisoft open-world stuff filling in the cracks, including smaller side missions and heaps of collectibles items to discover.

This leads to some very exciting third-person gunfights, as you dart between enemies, dodging grenades and machine-fun fire. The longer you play, the better these fights become, as your pile of weapons and special abilities grows.

As you finish missions and push through smaller “encounters,” you earn points that can be used to upgrade your base. Those upgrades give you tech, like a rolling, enemy-seeking robotic bomb, or a turret you can drop in the middle of a fight. By customizing these abilities and other earned talents on the fly, you can adapt to any situation.

The Division is a game that wants to keep you turning its hamster wheel.

Together with the game’s particularly strong level design, especially in its meatier missions, this customization leads to some fun, intense shootouts — especially if you have friends. Most every encounter has multiple ways to approach it, so you can be smart and tactical as you work together with your various abilities, taking different positions to support each other.

Played alone, though, The Division becomes much more of a boring slog. Cover shooters mean spending a lot of time pinned down, hiding, thinking about your next move. Throw in MMO-style enemies that suck up a bunch of damage before dying, and you just end up sitting quietly for long stretches in dull, lengthy fights. It’s much tougher to take advantage of cool level designs when all the enemies are focused on you constantly.

The Division’s many cool ideas just don’t always mesh well. They require specific circumstances to work as intended: namely, playing with other people who have played long enough to accumulate some interesting upgrades. That means spending a lot of time on things that are a lot less fun.

Cleaning up the city

The Division is littered with minor side content that amounts to so much busywork, and the game guarantees that, like it or not, you’ll have to do at least some of it to advance. Each main mission doesn’t offer enough rewards to get you strong enough to head straight to the next one, so you always have to spend some time grinding smaller missions to level up or earn upgrades to your base.

It’s just repetitive. The Division already is a game about “saving” New York that doesn’t really let you do anything but shoot people and flip switches; putting that cycle on repeat just bogs the game down. By the end, you’ll have cleared out so many enemy strongholds and saved so many indestructible hostages that it’ll all feel robotic.

Some MMOs make up for this at the “endgame,” the portion of the game you reach once you’ve completed the story and maxed out your character, where the toughest content and the best rewards live. But here, too, The Division is caught in a bit of an endless, disinteresting loop.

The best idea the game has is its “Dark Zone,” an area where players can actually interact with each other when they’re not on a team. Here, super-tough enemies roam around getting into fights with each other, while players run free, picking them off and taking the best equipment they can from the battle. You can team up with other agents as usual … or you can betray them, kill them, and take their junk. Doing so triggers a “manhunt,” alerting all the other agents that you’ve “gone rogue,” and they get better rewards for bringing you down.

In theory, you’re supposed to team up with other folks on the fly to kill a big boss, while always keeping your potentially backstabbing new “friend” in the corner of your eye. To haul your great new gear out of the Dark Zone, you have to extract it by helicopter, which lets everyone, enemies and other players alike, know your location. They may join your last stand as you wait for extraction to arrive, or kill you and take your stuff as the last seconds tick off the clock. It’s meant to be a tense, fraught experience of friendship and betrayal.

In practice, the Dark Zone doesn’t really work that way. The penalty for going rogue is pretty steep, so most players tend to just work together. Occasionally bands might form to run amok, killing other players, but for the most part, people are pretty nice to each other.

The Division is absolutely, 100 percent better when played with friends.

Meanwhile, there’s just not much to actually do there. You get into some fights with tougher bad guys as you roam around. Maybe you interact with another player. There’s nothing to find there but guns with different numbers, and the amount of time invested doesn’t carry much payoff. After a while, the DZ just isn’t too exciting.

Your other endgame option is pursuing the “Challenging” version of existing missions – replaying the same story missions from earlier in the game, but with stronger enemies. They aren’t really more fun to fight, because they just take more bullets to kill and more time spent hiding.

Ubisoft is adding more content in the future, including “Incursions,” which are supposed to be larger, more difficult missions. But for the time being, players are stuck wandering the DZ and replaying content they’ve already beaten, in hopes of getting ever-stronger guns to keep the loop going.

A story that says nothing

The Division’s setting and narrative aren’t only dull, they’re often uncomfortable to play through.

Players take on the role of government agents with zero oversight and near-unlimited powers, which basically translates into executing anyone on sight. When the first “gang” players come across are “rioters” — New Yorkers who have armed themselves and who steal what’s necessary to survive — this gets unsettling.

In a post-Ferguson, post-Katrina America, the concept is tone-deaf and fraught with ignored political undercurrents. Players with the arsenal of a small army roll up on hoody-wearing enemies carrying handguns and baseball bats, and execute them. Often, you can kill them without them even seeing you, and without any outward sign that they particularly deserve it, other than the fact that the game has marked them as bad, and therefore killable.

A lot of words have already been written about The Division’s lack of political awareness. ZAM’s Robert Rath delivers one of the best, arguing that The Division fails to really do Clancy’s name justice.

The game floats these concerns at times, but fails to engage with any of them. Any criticisms of a secret, licensed-to-kill police force are rendered moot by the fact that you’re forced to be a “good” person who can’t hurt civilians and who is successful in “saving” the city.
The developers created a realistic world but they don’t want you to take it seriously. Why would you bother to care about it?

Under the right circumstances, The Division can be a fun, tight experience. When you grab some teammates, put together complimentary gear and abilities, and head out to take on tough baddies or other players in the Dark Zone, the game has the ability to be very exciting.
But all the stuff you have to do to get to that excitement drags down the overall package.

The Division is a game that’s meant for you to dump hours into endlessly to get better loot, much like its competitor, Destiny. But it lacks the heart that might make it interesting to do so. Much of the game relies on compulsion: collecting all the things, finishing all the missions, finding all the guns with the very highest numbers. As it stands now, Ubisoft doesn’t really provide a good reason to put in the work.

Unless you have friends on-hand all the time, it’s hard to really care about what you might find around the next corner of The Division. It’s almost always what you found around the last corner.