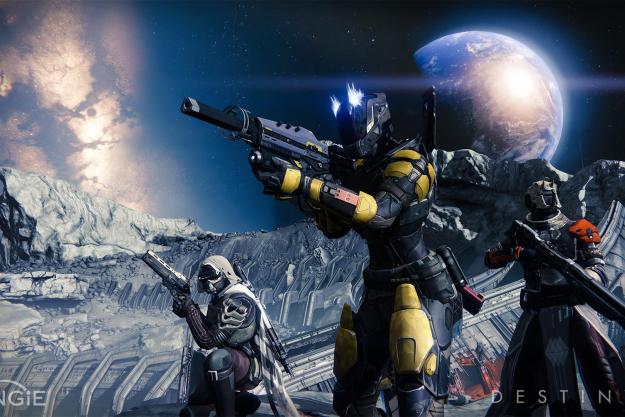 “Destiny is a good game, but not a great one. You'll want to spend tens of hours with it, but you'll wish certain things could be better all the while.”

Destiny is a good game, but not a great one. You’ll want to spend tens of hours with it, but you’ll wish certain things could be better all the while.

Dark things lurk in the shadows – and Bungie knows a thing or two about shadows. The studio’s Halo franchise, now left in the hands of Microsoft as the price paid for creative independence, casts a long one over Destiny. And heavy expectations are the dark things that lurk there. Even after years of development and hype, Destiny – a sci-fi first-person shooter to Halo’s sci-fi first-person shooter – begs comparisons to the earlier creation.

That, as it turns out, is a big problem.

Dark things lurk in the shadows – and Bungie knows a thing or two about shadows.

Destiny is a massively multiplayer online game the likes of which Microsoft and Sony consoles have rarely seen. Trion Worlds’ Defiance may be the closest competitor in terms of scope, but Bungie wisely plays to its strengths by punctuating the long-term grind of your typical MMO with an emphasis on moments of frantic action. Where Defiance relied on stats and unseen dice rolls, Destiny leans on the well-worn practice of twitch reflex shooty shooty.

It’s Halo‘s so-called “30 seconds of fun,” just writ large across a universe populated by other players who are all off doing their own thing. The pacing and feel of the corridor-style gunfights and vast battle arenas create an inextricable link between Halo and Destiny, but the latter establishes all of this as a shared space. There are MMO-style “instance” zones that temporarily sequester a player to complete a mission, but the transition from public lobby to instance and back again is seamless and immediate.

The story picks up in humanity’s distant future, after we spread out to colonize the local solar system only to be nearly wiped out by a significant event known as the Collapse. All that remains of Earth’s population dwells in a single city, with Guardians – powered by the Light of a mysterious alien benefactor – serving as its protectors. The fiction is ripe for exploration, but the game explores it on only the most surface level. A handful of cutscenes and overall lack of memorable characters do little to invest players in this universe. Though Destiny’s first expansion, The Taken King, does a better job at integrating a narrative into the experience, the story always hangs around the game’s edges.

The chief problem, however, lies in the way that Destiny establishes itself from moment one as a shooter. Players are dropped into what amounts to a tutorial mission, the sort of standard-issue “This is how you move, this is how you jump, this is how you shoot” training scenario that doles out the starter tools, offers a first taste of long-term RPG-style level progression, and sets up the story. If the teaching continued from there to lay out the many systems and how they work, that would be great. But it doesn’t, and the lack of additional explanation gives rise to false expectations about what the game actually is.

Destiny is bafflingly short on tutorials when it comes to its RPG elements. It doesn’t matter if you’ve got a question about leveling and how it works, weapon upgrades, crafting materials, or the purpose of bounties; none of the answers are found in the game. Bungie’s talents might have been tempered in the fires of the highly competitive first-person shooter market – and that is truly where Destiny sings, make no mistake – but the studio’s background doesn’t excuse what feels very much like a Quality Assurance 101 failure.

The same paucity of tutorials hobbles the end of the game, when Destiny transforms from being a quest for XP into a quest for loot, since a new stat on armor pieces is what enables the post-cap leveling. It’s an inventive approach, and an unusually effective one, but it requires players to rethink their approach after 15 to 20 hours of play. With nothing more than a brief, under-explained text pop-up to go on, players are left to flounder until they figure things out for themselves or turn to the Internet for answers.

That’s just poor design. As a player, you might not appreciate the grind associated with leveling and post-cap progression, but that’s how an MMO game works. In World of Warcraft, you click and click and click until you amass enough XP to take on endgame raids. Destiny is no different in that regard, with Strike missions (and other incoming content) providing the same sort of endgame goal. You have to figure that out for yourself though, along with all of the complex systems feeding into that.

Destiny won’t step into the light until its creator embraces what makes this new effort so gloriously, rewardingly different.

The same can be said of Destiny‘s Patrol missions, which provide fuel for grinding out experience points. These scenarios disconnect from the story entirely, depositing players in a chosen planet’s open world, massively multiplayer space and letting them take on a random selection of short, repeatable missions. Bungie seems to have learned from its mistake for Destiny 2, which uses an “Adventures” system to feed players plot information as they’re exploring the open world.

When they work, Patrols create situations where your raging firefight can coincide with another group’s raging firefight. The result is a potent experience, one that channels the most exciting set pieces of a blockbuster shooter, only framed against the backdrop of a shared space. When they don’t, they send you on a 15-minute trek across the open world just to take out one miniboss, or hunting for multiple pickups dropped by some obscure enemy type that is only found in another part of the planet. An in-game map might have helped. Or just more thoughtful mission assignments.

The trick for any MMO developer comes in ensuring that the grind is satisfying. Destiny is so close. The combat is immensely satisfying and the lure of progression – whether it’s from unlocking new skills or discovering fresh loot – is irresistible for fans of such things.

But the middle portion of the game feels undercooked, with the “recommended level” for each story mission starting to outpace what would be natural progression for most players just as you reach the third of four planets. It’s here that the grind goes from satisfying diversion to chore; you’re chasing XP just to get to the next mission, and it goes slowly. The lack of tutorials only exacerbates the issue by leaving confused players to waste time developing in less-than-productive directions. As enjoyable as Destiny‘s action is at a base level, frustration with the rudderless mid-game threatens to ruin the experience for less patient players.

There’s always competitive multiplayer – PvP, to use the parlance of MMOGs – which Destiny calls the Crucible. It’s not for everyone, but the simple lineup of familiar match types, which range from team deathmatch to every-Guardian-for-him/herself showdowns, provides what may be the quickest way to progress prior to capping out at level 20. The lack of depth is surprising – Only four modes, and maybe double that in maps? – but the immediacy of the game’s action translates nicely to competitive match-ups. Would you expect anything less from the studio behind Halo?

Yes, Bungie can build a helluva shooter. But this is the team’s first take on the sort of long-term, massively multiplayer experiences that games like Defiance and World of Warcraft provide. The win here is in the action, as immediate and fast-paced as it ever was in Master Chief’s armored boots, and several degrees more exciting than the clickfest that most PC MMOs are realized as. Likewise, the design shortcomings all seem to stem from Bungie’s awkward attempt to step out from under Halo’s shadow.

In Destiny, ruinous alien races like the Hive and the Vex flit around in the shadows, waiting patiently to end those Guardians that are foolish enough to venture into their midst. The Flood served a similar purpose in Halo, assailing players with deformed, dangerous monsters born of a parasitic infestation. For Bungie, though, no shadow is darker or more difficult to escape than the one cast by its past work. Destiny‘s shortcomings all feel like fixable problems, but the game won’t step into the light until its creator embraces what makes this new effort so gloriously, rewardingly different. Perhaps Destiny 2 will manage to succeed where the original failed.

With Destiny 2 coming in September, 2017, we recommend waiting to jump on board for the sequel.

The story mode in Destiny will last several hours, but most of your time in the game will be spent completing Patrols, Strikes, and raids. If you’re buying the game today, we recommend picking up The Destiny Collection which includes the game’s expansions, including The Taken King and Rise of Iron, which add a combined 10-15 hours of story missions, strikes, and raids.

That said, completionists can (and will) spend hundreds of hours grinding for experience and loot to get strong enough to beat the game’s toughest challanges.

If you’re planning to jump into Destiny 2 at launch, the original game can provide a little more context. But if you’re not interested in the lore and story, there’s not much point buying it anymore.

This game was reviewed on a PlayStation 4 using a retail copy provided by Activision.