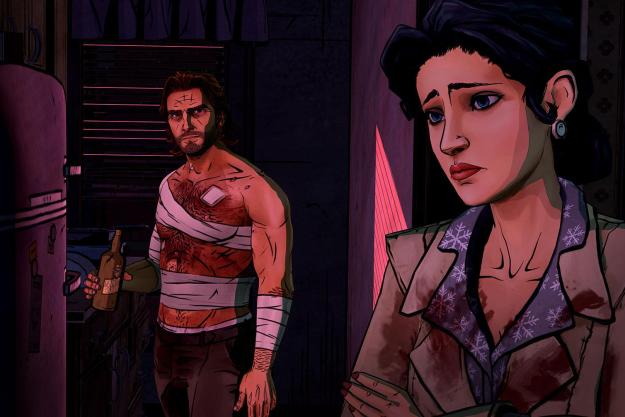 The Wolf Among Us – Episode Four: In Sheep’s Clothing
Score Details

“Telltale Games lays bare the gray heart of Fabletown in Episode Four of The Wolf Among Us, titled In Sheep's Clothing.”

Take note before you read any further that you’re reading a review of the fourth episode in a five-episode season. You’re going to be lost if you haven’t played The Wolf Among Us up to this point, and probably spoiled as well. If you really want to know more about the game without having played it, check out our reviews of Episode One, Episode Two, and Episode Three before you continue here.

Fabletown is broken, and Telltale Games is to blame. The truth has been staring at us all since the premiere episode’s opening scene, but it’s only in episode four – the aptly titled In Sheep’s Clothing – that The Wolf Among Us lays everything bare. Plenty of questions linger for the coming fifth and final episode to address, but the dark undercurrent that’s been present in every episode to date takes form in this penultimate chapter.

Poor Bigby. Fabletown Sheriff Bigby Wolf had no idea what he was stepping into when he had that first fateful encounter with Faith in Episode One. Like a proper canine, the community’s sole peacekeeper trusts his instincts to lead him down the right path. The events of In Sheep’s Clothing suggest how very wrong that might be. Is what’s right in the short-term also right for the long-term? Can you even fairly judge what “right” is when everyone in the community has a different definition?

There’s genius in the way Telltale forces us to ask the question: is this “wolf” really that big or bad?

Again, we’re back to Bigby’s first Wolf Among Us encounters, a seemingly inconsequential exchange with Toad about identity-concealing Glamours and the cost of carving out a life in Fabletown. Non-human Fables are forced to live upstate on The Farm unless they can properly conceal themselves. After episode three, we know there’s a black market supplying illegal magic to the community, and we have a sense of the mysterious Crooked Man being involved. How these pieces fit together is a critical focus in this fourth chapter. The sheep’s clothing comes off, as it were, and the wolf is revealed once and for all.

There’s genius in the way Telltale forces us to ask the question: is this “wolf” really that big or bad? Our own wolf, Sheriff Bigby, has fought long and hard in search of the truth. He supposedly cast off his Big Bad Wolf moniker when he stepped into the role of Fabletown sheriff. But after everything he’s done, all the dominoes he’s set in motion throughout this series, could Bigby Wolf be the actual Big B(ad) Wolf of this tale?

Nothing’s that simple or black & white in The Wolf Among Us, and In Sheep’s Clothing hammers hard on that point. Bigby isn’t a villain, but the forces aligned against him aren’t exactly the moustache-twirling sort either. We’ve seen ruffians like the Tweedle brothers bloody plenty of noses, but Bigby’s hardly an innocent on that count. Intent always matters, and we’ve always known that the sheriff wants to protect his community. But what if that’s what our so-called villains are after as well?

The complexity of these characters is staggering, and the fact that you can see their depth without any knowledge of the source material makes Telltale’s writing achievement even more impressive. Whether we’re seeing the human side of Woody the Woodsman, such a fearsome presence back in that first episode, or coming to understand why a seemingly innocent soul like Tiny Tim would play at the dark edges of the Fabletown community, even the minor players stand out.

That’s always been the beauty of Bill Willingham’s Fables comic book series, on which The Wolf Among Us is based. Willingham cuts out familiar personalities from the pages of fairy tales and renders them in three dimensions. He breathes humanity into a fantasy framework. That spirit has been alive and well in Telltale’s series all along, and now it’s left us on the doorstep of what is sure to be a surprising and emotionally impactful concluding episode.

If you’re this far in already, you know the score: play Episode Four then try to contain your anticipation for Episode Five. As Telltale has repeatedly proven again and again with The Wolf Among Us, the wait will be worth it.

This game was reviewed on a first-generation Alienware X51 gaming PC using a Steam code provided by Telltale Games.