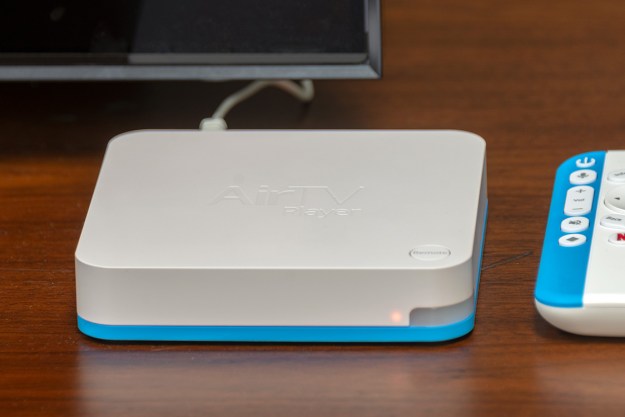 “By playing favorites and putting up too many roadblocks, the AirTV undermines its best features.”

One of the trade-offs you make when cutting the cord from cable TV is decentralization. Whether it’s multiple devices, multiple subscriptions to different apps and services, or a bit of both, you’re likely to be navigating a fractured content library — and while you’re free of the cable bills and inflated channel listings, juggling those services can get annoying. There are plenty of devices and services that help consolidate everything into one place, but few focus on meshing the two best ways to watch live TV without a cable subscription: live TV streaming services and HD OTA (over the air) channels.

The AirTV ($100) is one of the first to do so. Running a version of Android TV, this tiny set-top box embeds your antenna experience into one of the most popular live TV streaming services, Sling TV. Unfortunately, this means the AirTV plays favorites for streaming services as well as its own interface, and coupled with some other glaring faults, makes for a rather unintuitive bundling experience.

The AirTV is constructed into an unassuming box with rounded edges and a pleasant white and blue color scheme. The brighter colors stand out a bit more than the black finish of a Roku Ultra or Apple TV, and it’s a nice change of pace from the endless procession of black boxes likely collecting under your TV. In terms of physical dimensions, it’s on the smaller side, standing an inch high and five inches wide by five inches deep — roughly the same size as the Roku Ultra.

The front of the box has a small LED that emits a soft, reddish-orange light when the device is on. On the back are several connection ports, including two USB ports, optical audio, Ethernet, and HDMI (the device also supports Wi-Fi, of course).

The design is simple, straightforward, and smartly differentiates itself visually from similar products. The remote, however, is another story.

There’s no other way to say it: The AirTV’s remote is ugly.

There’s no other way to say it: The AirTV’s remote is ugly. It’s wider than it needs to be, the button layout isn’t great, and it looks like a toy.

Its worst functional issue is its poorly labeled buttons. It turns out that a mysterious, black-diamond button in the bottom-left corner takes you to the Android TV interface, but no clear indication of this is made anywhere. No manuals or guides are included with the AirTV, and while you can easily figure a lot of this out by trial and error (or a quick internet search, in our case), even a simple diagram included in the package would have been a big help.

The remote does have a few redeeming qualities, however, most notably the convenient buttons for Sling TV, Netflix, Google search, and voice search via the on-board microphone – a welcome feature at this price point.

While the AirTV employs the Android TV interface, it leans heavily on Sling TV as a sort of central platform — so much so that it might as well be called the “Sling TV Box.” In that regard, it’s convenient for Sling TV users, especially if it’s your primary (or even only) streaming service, but not necessarily for anyone else.

Setup for Sling TV is a cinch — just sign in with your Sling TV account when prompted during setup, and you’re set. For non-Sling users, it’s not immediately clear what to do.

AirTV requires you to create a free Sling “guest” account, which is harder than it should be. The option to make a guest account is buried in menus and small text. In fact, if it wasn’t for a short line of text informing us that setup can be done without a Sling TV subscription, we’d have thought Sling TV was a requirement for using the AirTV. It’s not, but this fact feels obfuscated on purpose.

Continuing this trend, Sling TV is what you’ll normally see upon AirTV sign-in. Guest accounts will be subject to large Sling TV ads taking up portions of the screen when browsing certain content tabs. It turns out this can be circumvented by disabling the Sling TV app in the Android TV settings tab, but the ability to do so is never expressly stated anywhere, so some users may never realize it’s possible. We only figured it out after a few minutes of meandering through the Android TV settings.

Using the AirTV is a chore without a Sling TV account.

While using the AirTV was a chore without Sling TV, Sling TV subscribers will be happy to hear that the Sling interface is largely identical here as in other devices, with small additions like an antenna channel’s tab to lineup your broadcast channels, a row of Netflix recommendations, and another for launching other apps, including Sling TV competitors like PlayStation Vue, YouTube TV, Hulu with Live TV, and DirectTV Now.

The Android TV side of the experience is essentially the same as it is on other Android TV devices. Android users can sync their Android account with the AirTV to enmesh it into their Android ecosystem, allowing access to previously purchased content from Google Play or stored on the AirTV drive.

Whether using the Sling TV or Android TV interfaces, we were most impressed by how well the AirTV handles OTA channel setup. Getting any HD antenna synced up with the AirTV is as easy as plugging in your preferred model, plugging in the coaxial-to-USB antenna adapter into one of the two USB slots on the back of the box, and powering on both the adapter and AirTV.

The AirTV will automatically recognize your HD antenna and prompt you to begin scanning for channels. The box even goes the extra mile by scraping for metadata (what’s airing when, episode info, etc.) and applying it to your channel and show listings. The inclusion of broadcast channels is where the AirTV makes its strongest impression and is by far its best feature.

Now, if you were hoping that feature was presented with no strings attached, we’ve got some bad news.

We were impressed by how well it handles setting up OTA channels.

The second issue is that the adapter required to connect your HD antenna is an extra purchase (either $40 separately, or $30 when bundled with the AirTV itself), adding on to the AirTV’s $100 base price to use its best feature — not counting the price of your separate antenna.

What AirTV can (and can’t) do

While setup can be a headache, once you’re finally watching, the AirTV performs admirably enough. Picture quality will depend on your internet connection speed and the locations and placement of your HD antenna, but in general movies and TV look good on the AirTV. The box supports 4K playback, so if you have a 4K TV or projector you’ll be able to watch supported content in full resolution.

The AirTV lacks HDR (high dynamic range) support, however, which is in many ways the more impressive image quality upgrade when watching on a 4K HDR TV. While OTA TV is still stuck in HD, HDR is a disappointing omission for other content, and since the majority of the best 4K streaming devices support HDR in some form, it makes the AirTV that much harder to recommend to 4K TV owners.

Since the AirTV is an Android TV device, there’s a long list of games available. Unfortunately, while you can technically download and play these games, we don’t recommend it; not only does the remote make for an abysmal controller, the 6GB of internal storage and lack of expandable memory means you’ll only be able to download a few games at a time, and some larger titles won’t even fit. If you want an Android TV device that also works for gaming, the Nvidia Shield is a far better choice, with honorable mention going to the Amazon Fire TV 4K.

The lack of HDR, a bad remote, and lackluster UI hamper the experience.

Perhaps the bigger bummer for prospective AirTV customers is that DVR options are limited, depending on your setup. You won’t be able to record OTA TV programming out of the box. To do so, you’ll need to purchase a USB storage device, adding yet another necessary purchase to get the full functionality from the AirTV — and only a few models have been successfully tested with the feature so far.

Even then, DVR functionality is only in beta on the AirTV at the time of this review, and its functionality has several caveats, such as only allowing one channel to be recorded at a time, the inability to watch a recording before it’s finished, and several more. All these restrictions and extra steps add up to an inelegant and underwhelming DVR solution.

Thankfully, the cloud DVR for Sling TV and other Live TV services are available, but the messy implementation of the OTA DVR feels like a misstep, specifically because the AirTV makes such a strong push for being an all-in-one solution for streaming and antenna TV.

The AirTV comes with a 12-month limited warranty, covering material and workmanship defects, that begins from the moment you sign into Sling on your AirTV for the first time.

Sling TV fanatics will get the most out of the AirTV, but even for them, issues like the lack of HDR, a bad remote, and a lackluster UI will hamper the experience. Sure, AirTV presents a simple way to couple your antenna and live TV streaming channels into one location, yet that alone isn’t worth recommending it — and getting the fullest experience requires too many extra purchases for what’s presented in the final product.

If you want a streaming device that can do just about everything the AirTV does, and with a much better interface, the Nvidia Shield is your best bet. It does the Android TV thing, and does it much better, without favoring any one platform or app. More important, it supports 4K HDR, can support OTA antennas (when coupled with an antenna tuner like the HDHomeRun or Tablo), offers DVR functionality, and it can store hours of recordings or even act as a Plex server. It can even store full-quality video games or stream them from the cloud or a PC.

The Shield’s $200 price might seem steep compared to the AirTV at first, but considering you’d be paying $130 for the AirTV with antenna adapter plus a large-capacity USB drive for DVR, there’s not that big a price discrepancy. In addition, the AirTV’s interface all but begs you to spend $20 to $40 per month on Sling TV.

The AirTV itself is well designed, and we aren’t concerned about its durability – the remote might seem toyish, but it also seems dependable enough. Down the road, we see some potential for AirTV’s OTA functionality to continue to grow, but there’s no solid guarantee there, especially considering the limited on-board storage and static user interface.

No. Even if you’re an avid Sling TV fan there are better options out there for combining streaming and OTA channels.