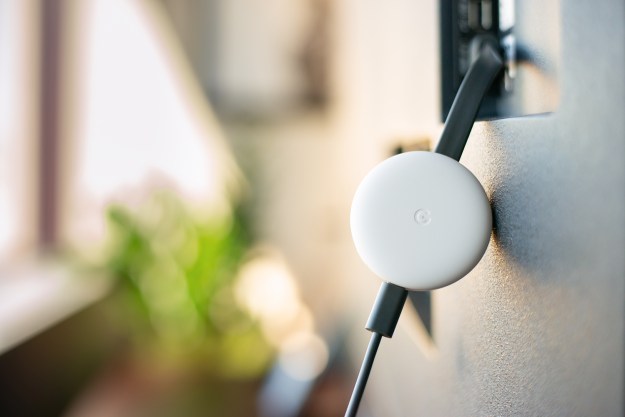 “Google’s 2018 Chromecast is essentially just the old Chromecast with a new coat of paint.”

What do you call a product update that’s so insignificant it’s unworthy of mention at your own hardware event? If you’re Google, you call it the Chromecast 3rd Generation.

While there’s not much new about the latest Chromecast, it’s still an easy and affordable way to stream HD video. And now that it’s got Amazon Prime Video support, it’s finally a comprehensive way to get your (HD) stream on.

(Editor’s note: This review has been updated to add information about new support for Prime Video following Amazon and Google’s truce.)

Released in 2015, the second-generation Chromecast was the first to ditch the flash-drive look for a puck design. The third generation follows suit, offering a design that’s strikingly similar to both its predecessor and 2017’s 4K HDR-ready Chromecast Ultra. The new device is maybe a sliver thicker, but it feels sleeker thanks to its more modern, matte-plastic shell and monochromatic color scheme (available in “chalk” or “charcoal”). We’ll also give Google very minor props for making the new box slightly easier to open.

Other than a minor makeover, the only noticeable design change is that Google has done away with the magnet at the back, so even if your TV’s backside sports a metal facade, you’ll have to dangle your dongle. (Sorry, we couldn’t help ourselves.) As before, the device comes with a long USB cable and wall adapter for plugging into either your TV or outlet.

Unlike virtually all other streamers, Chromecasts don’t have an interface, per se. The closest thing would be Google’s Home app, which is updated fairly regularly and offers features like voice search and integration with other Google Home hardware. The app walks you through setup in minutes; just plug in, follow the directions, and you’ll be streaming in no time.

The best reason to own a Chromecast is intuitive streaming (or “casting”) from virtually any streaming app on your mobile device. That has always been the key selling point, and it remains unchanged for the third generation.

Whether you choose an HD Chromecast or the 4K HDR Chromecast Ultra, the ability to stream almost anything to your TV at the tap of a finger is a huge reason Chromecast is popular, perhaps second only to its affordable price. Chromecast also allows you to stream any browsing tab in Chrome, and even mirror your desktop. Even if it’s not your primary streamer, which is increasingly the case for many, it’s nice to have a Chromecast around when you need one.

As we alluded to above, apart from an updated look, there’s very little new to report in the latest HD Chromecast. A side-by-side comparison reveals a near identical list of features for both the third-generation Chromecast and the 2015 model. Along with the same basic size and weight, both devices include HDMI connection, Micro USB input, Wi-Fi 802.11ac connection (2.4GHz/5GHz), and an optional Ethernet adapter.

Intuitive streaming has always been the key selling point, and that hasn’t changed.

When it comes to streaming, both Chromecasts max out at 1080p HD resolution (i.e., no 4K video or HDR support). The biggest notable difference here is that the latest Chromecast offers 1080p video at 60 frames per second, as opposed to 60 fps at a max 720p. Since most streaming TV from Netflix, HBO — and finally, Amazon Prime Video — tops out at 30 frames per second, the improved framerate won’t really matter for a lot of what you watch, and much of the content you’ll find on YouTube at higher framerates is offered in 4K resolution.

Where the higher framerate could make a very slight difference is for live sports content from streaming services like Sling TV, where the action should theoretically be more fluid for 1080p content when both sides of the streaming pipeline are firing on all cylinders. Newer TVs commonly offer a 60Hz native refresh rate (i.e., 60 cycles per second), meaning 60 frames-per-second video offers a frame to fill each moment on screen to provide cleaner movement with less stuttering. That said, a high volume of live sports content maxes out at 720p anyway, so there’s really very little to crow about here.

As you’d expect, we didn’t notice any difference between our second-generation Chromecast and the new model, even when viewing live sports. Again, that’s mainly because it can be hard to even find 1080p sports content, and moreover, many TV streaming services often have trouble providing a stable enough 1080p stream to take advantage of 60 fps without stutters and resolution adjustments.

We also didn’t perceive a noticeable difference between the two devices when viewing 60 fps 1080p HD content from YouTube, which was delivered much more reliably.

Unlike the previous update in 2015, we also didn’t clock faster loading times or speedier response in comparison to the new Chromecast’s predecessor. Despite Google’s claim that the latest device is 15% faster thanks to improvements to clock rates, it’s got the same dual-core ARM architecture as its predecessor, and accordingly, our stopwatch told the same story.

Google’s new Chromecast is essentially just the old Chromecast with a new coat of paint. The higher framerate may be enjoyable for some in very specific situations such as live sports in 1080p resolution, but it’s no reason to trade in the older model. While Chromecast remains one of the easiest and most intuitive ways to stream, with several years of streaming history elapsed between models, we expected something (anything) more — especially when the latest tiny streaming devices from both Amazon and Roku offer 4K HDR resolution for not much more cash.

Yes! As referenced above, there’s a higher class of affordable 4K HDR streaming devices, including Roku’s $40 Roku Premiere and the feature-packed $50 Roku Premiere+. For its part, Amazon also now offers a $50 4K HDR streamer in the Fire TV Stick 4K, which also adds Dolby Vision HDR alongside HDR10 and HDR10+ for an even more dynamic way to experience HDR’s improved contrast on supported TVs.

Of course, if you just love the versatility of casting, there’s also the 4K HDR Chromecast Ultra, which is a heftier upgrade at $69, but, like Amazon’s device, it also adds Dolby Vision HDR. For more options check out our best streaming devices.

While the third-generation Chromecast should hold up for years to come, the HD-streaming limitation is a real hindrance at this point. Even if you don’t yet own a 4K HDR TV, there’s a good chance you will in the near future, and you may well find yourself wondering why you bought an HD streaming device — even a highly affordable one — in 2019.

We wouldn’t. As the replacement for the previous device, the third-generation is now the only HD Chromecast available, but if you already own one, there’s no real reason to upgrade, and if you don’t, there are plenty of more advanced streaming devices for just a few bucks more.

Topics
How to watch Super Bowl 2023
The best Google TVs of 2023
Ad-free HBO Max is about to get more expensive
The best Sling TV alternatives
This massive OLED TV has a $1,000 price cut at Best Buy today
Best new movies to stream on Netflix, Hulu, Prime Video, HBO, and more
I replaced my kitchen TV with an Echo Show 15 — and I kinda liked it
The best HDMI cables you can buy in 2023
The best speakers for 2023: great hi-fi options for music and more
The best Blu-ray players for 2023
Why the Nest Hub Max still rocks as a kitchen TV
Stream live sports without cable with Sling — now 50% off
OnePlus Buds Pro 2 to support Android’s new spatial audio feature