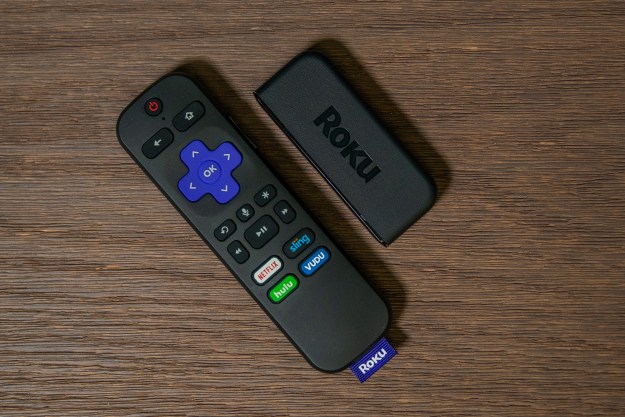 “Roku’s brilliant new Premiere+ is one of the best streaming devices in the business.”

It’s a glorious time to be a streamer. There’s never been more to watch, and thanks to options like 4K and Dolby Atmos, video looks and sounds better than ever. Just as importantly, the devices that serve up our streams are constantly improving as thick competition drives down pricing. And no one offers more ways to stream (or more apps, for that matter) than Roku.

Of course, even if you’ve decided Roku is your brand (instead of, say, the Fire TV Stick 4K), with seven models available, choosing the right one for you can be confusing.

Luckily, each new release in Roku’s lineup seems to offer more for less, including the strikingly affordable new Roku Premiere+ ($50). Though it’ll cost you $10 more than the regular Premiere, and doesn’t quite match the pricier Streaming Stick+, the Premiere+ offers nearly everything you could want in a streamer — from 4K HDR to voice search and TV controls right on the remote — making a great case as the value pick of the pack.

At the back of the little black nub are ports for HDMI and power connection. Accessories include a remote and batteries, an HDMI cable, and a USB power cable and wall adapter for versatile power connection. You’ll also get two strips of velcro-lined sticky tape to mount the device, or to keep it upright on your console (though ours stood up just fine on its own). Where you put the streamer isn’t of much concern, though, as its radio-frequency remote doesn’t require line-of-sight.

Speaking of the remote, it’s loaded with Roku’s dead-simple navigation keys and streaming hot keys (including buttons for Netflix and Hulu), along with power and volume keys for your TV, and a microphone button for voice search.

Those who’ve set up a Roku in the past know how easy it is to get things going, as well as the fact that our Star Trek subhead didn’t originate here — it’s actually one of the clever little phrases that pop up as the Roku system goes online. Each new Roku seems to be a little easier to set up, and even when factoring in linking the remote to both the Premiere+ and our Samsung QLED Television, setup was a cinch.

As with Apple and other devices, that’s especially true if you’re already indoctrinated into the Roku ecosystem (and you didn’t forget your password). A few confirmations are all it takes to quickly recall all your apps, and Roku even signs you in to those you already have up and running. While not quite plug and play, Roku setup is about as close as it gets in streaming land.

Even apart from the micro size, those looking to compare the 2018 Premiere+ to its predecessor will find a lot has changed. Roku has both added and removed features in the name of affordability to cut the price by nearly half. For the most part, the changes are welcome, with some helpful features added, while superfluous ones were dropped to help stretch your dollar further.

The most evident changes are on the new remote. The latest Premiere+ remote ditches the headphone jack along with the included headphones — you’ll have to step up to the $100 Roku Ultra to get those these days. Instead, you can connect to the mobile app for headphone listening, which worked flawlessly in our testing, and also utilized our LG V30’s superior DAC.

On the plus side (no pun intended), the addition of voice search, as well as basic TV power and volume control on the remote, are substantial upgrades that we use much more than the headphone feature (though we also don’t have any early slumberers in the house). For those eyeing the cheaper Roku Premiere, it’s also worth noting that the Premiere+ boasts a point-anywhere remote that is extremely convenient; no more misfires when something is blocking the device, and it can be set up pretty much wherever it fits best.

The new Premiere+ also ditches Ethernet and, unlike the Roku Streaming Stick+, it forgoes 802.11ac and dual-band Wi-Fi, opting only for the potentially slower 802.11 (b/g/n) and the 2.4GHz band. That means you may not get the absolute fastest connection speeds, especially if you have a lot of people on the network, and you also won’t want to stray too far from your router. That said, we didn’t have any streaming issues, save a slight delay of full resolution with 4K HDR video. Frankly, it’s nothing like the “old days” of streaming a few years back, where an Ethernet port was almost required for 4K, so we aren’t complaining.

Speaking of 4K HDR, Roku devices still don’t support Dolby Vision (save Roku smart TVs like the TCL 6-series), opting only for the more prevalent HDR10 format. This may or may not be an issue for you, depending on whether or not you currently (or intend to) own a Dolby Vision 4K HDR TV. Even if you do, Dolby Vision streaming content is currently pretty limited, but it’s worth noting that both Amazon’s forthcoming Fire TV Stick 4K and the pricier Chromecast Ultra are comparable devices that support both. As for audio, the Premiere+ offers Dolby and DTS passthrough for an A/V receiver or soundbar.

For those who have yet to use Roku’s intuitive, minimalist interface, to quote the infamous John McClane of the Die Hard films: “Welcome to the party, pal(s)!” Frankly, Roku has been running away with the title of most convenient streamer for years. While the much-pricier Apple TV 4K offers its own smooth interface, only fairly recently have similarly affordable streamers (like Amazon’s Fire TV sticks) offered serious competition in this department.

In addition, Roku’s library of over 1,000 apps and counting can serve up virtually any streaming service you might want, and while some of the apps are getting a bit long in the tooth, unlike Amazon and Google’s devices, Roku doesn’t favor any one streaming service over others.

Performance is incredibly speedy thanks to Roku’s top-tier quad-core processor.

For its part, the Premiere+ is incredibly speedy in operation thanks to Roku’s top-tier quad-core processor. Scrolling through apps is much faster and the device is much more responsive than our 2016 Premiere. We were also immediately impressed with how quickly apps loaded, even without the quickest Wi-Fi connection available. This may vary from network to network, but the Premiere+ worked great when connected to both our office and home routers.

As mentioned, we really enjoyed using the headphone mode with the Roku mobile app, which sounds great, though it does tend to drain your phone battery over time. The app is also quite handy as a backup remote, even allowing you to enter text from your phone instead of the old remote hunt-and-peck.

Voice search is also strikingly fast these days, and the Premiere+ only had one hiccup in testing when we slurred our words a bit when saying “Bob’s Burgers.” The system quickly serves up a list of streaming services offering your query, revealing pricing and which (if any) of your signed-in subscriptions carry it.

One feature you won’t get here (or with any Roku) is voice assistant, so you can’t do a quick web check or control your smart home. Roku doesn’t play that way, so if you’re looking for Alexa, Siri, or the rest of the crowd, this device may not be for you. On the other hand, if you like to keep your searching local, as we do, the contained Roku search is simple and speedy.

With just about everything you need, and nothing you don’t, the stripped-down, souped-up Roku Premiere+ strikes a brilliant balance between affordability and usability for some of the best value in streaming land.

Rather than “better,” we’ll just say there are a few pretty great streamers out there that could be better for you. For just $10 more, Roku’s Streaming Stick+ offers basically everything you see here, plus improved wireless range and mobility for those with higher-traffic networks.

While we haven’t yet reviewed it, we also expect Amazon’s new Fire TV Stick 4K to make a strong case. It offers most of the features of the Premiere+, alongside built-in Alexa and Dolby Vision HDR support, all for the same $50 price point.

For more options check out our picks for the best streaming devices.

While the lack of Dolby Vision may be more of a hindrance as time goes on, in all other aspects, the Roku Premiere+ is ready for the streaming future and should hold up for a long time to come.

Yes. If you’re looking for incredible value on a tight budget, Roku’s excellent new Premiere+ is one of the best in the business.